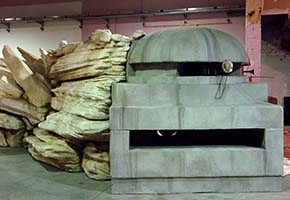 Clamor reverberates uneasily in a large grubby room in a former sugar factory in Lyon. It has the appearance of a concrete military bunker that has been chiseled from an eroded cliff face. The sculpted rock formation is reminiscent of a Casper David Friedrich landscape such as the one portrayed in The Polar Sea (1824), and like that Ship-ingesting terrain of Romanticism, this sculpture juxtaposes a man-made form with a ‘naturalistic’ geology of jagged and fractured strata. Musical instruments protrude from the bunker like artillery, and on closer inspection of the brass trombones and tubas taking aim from the battlements, it becomes clear that the structure contains a large inner hollow that is acting as a sound cavity for the brooding cacophony of recorded sounds and melodies that are filling the entire room, of which Clamor has sole occupancy.

The audio accompanying and vibrating within this sculpture is a looping soundtrack made up of marching band fodder, mournful bagpipe moods, and distorted guitar music. It is impossible not to become drawn into the ‘game’ of trying to identify the artists and lyrics of the songs as they are layered over each other and compete for attention in the 40 minute recording. The songs have been selected from an archive of instances where music has been used in military and political conflict, and by bringing them together in this context the artists produce a hitlist of wartime soundtracks. In light of these criteria it is not surprising to hear a lone bugle call to arms, but it is compelling to listen to Bruce Springsteen’s blue-collar classic Born in the USA struggling to be heard over or under Metallica’s Enter Sandman. Perhaps the most striking inclusion into this list of feudal favorites is I Love You, Barney the Dinosaur, which was apparantly, if not suprisingly, used to torture detainees in Guantánamo Bay. As you listen to the disparity that exists not only in the selected sounds of the artwork, but also the distance between the genres and content of the songs that are placed together, it becomes evident that the artists seem to be questioning the nature of the music in light of their deployment as weapons or accomplices to war. Could any song be appropriated in this way, or do they necessarily have to comply with some formula for sound, singer, or sentiment in order to be loaded and used as ammo for propaganda, bravado, or torture? The war movie genre has brought with it numerous soundtracks that act as chroniclers for war, forever fusing Wagner’s Ride of the Valkyries (Apocalypse Now) with helicopter attacks and Louis Armstong’s What a Wonderful World with introspective montages of a very grim reality (Good Morning Vietnam). The word Clamor refers to a loud and continuous noise, so this title draws obvious parallels with the omnipresence of war in both the media and reality. The sculpture itself shares the appearance of WW2 costal defenses, which like the songs resonating in and around Clamor, will long echo with the sounds of that era.

The curatorial theme of the 2007 Lyon Biennial is based upon a ‘game’ whereby all those who are exhibiting have been ‘tagged’ by a curator and in this in case it was Hamza Walker who declared ‘you’re it’ to Jenifer Allora and Franck Calzadilla. This process of nomination is reiterated in the signification of music, and the work became playful when the interior of the sculpture was occupied by musicians who were invited to give a live performance at the beginning of the Biennial. The drums, flute, trumpets and trombone embedded in the sculpture dueled dissonantly, and presented an additional play whereby the musicians were ‘heard but not seen’, in an artwork that is itself so loud that it is heard in the gallery before it can be seen. The stage that live musicians at a public event are traditionally given was absent, as instead the players were hidden away in the cavern of the sculpture and transformed into living remnants of the artwork and perhaps also the historical and social periods entwined in the songs performed.

The act of blowing a trumpet to represent victory or loss has an absurd element; like blowing a raspberry at the enemy, and the way in which the artists have choreographed an overview of conflicts from multiple locations and periods by blowing these songs simultaneously at a captive audience emphatically translates both the menace and irrationality of how a song, object, or idea can distort with a ‘tagged’ meaning. ‘You’re it’. 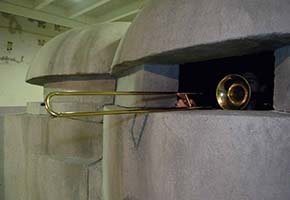