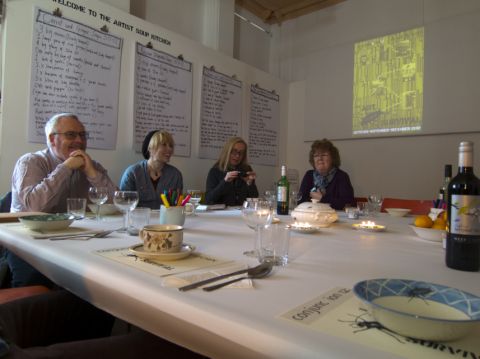 Conjunction 12 is the third biennial of contemporary art in Stoke-on-Trent, this year hosted by AirSpace Gallery in partnership with The Potteries Museum & Art Gallery, Staffordshire University, Jelly Arts, and a variety of other public organisations and businesses in the city, who have helped to select the works on show. The theme of the biennial is The Art of Survival, a broad idea addressed by the exhibiting artists in social, economic and ecological terms through formal exhibitions, interventions, performances and workshops across the city. With the challenges of survival in mind, the organisers have sought to develop a programme of artistic activity which locates community, discussion and interaction at its heart through a more discursive and collaborative model of curating.

The wider aim of Conjunction, and indeed many other similar biennials, might be described as attempting to ensure a sustainable future for the practise and display of art in the city. One way to do this is to showcase the value of art both for and within the community, particularly in an area like Stoke which has experienced a massive decline in traditional industry and the full range of problems that are associated with this. Ideas of local engagement have been at the forefront of discussions at this years Museums Association conference, Edinburgh and engage International Conference, Cardiff, and are notions which have perhaps been lost sight of by artists and curators in recent years. This, and the fact that the UK economy was reported to be emerging out of the double-dip recession just prior to the start of the biennial, provide some of the wider context in which Conjunction operates.

One of the exhibiting artists, Bethan Lloyd Worthington, has noted the importance of AirSpace Gallery as a driver for change in the city, not only in terms of its artistic circle but in the wider community: “They [AirSpace] are genuinely interested in exploring ways of being – being an artist, being in Stoke, ways that Stoke can be.” Whilst previous Conjunction Biennials have sought to bring both artists and audiences into Stoke, in 2012 the focus is very much more local, engaging with the history of the city, investigating some of the real issues it faces today, and challenges and opportunities for the future. The curators have forged a number of crucial relationships with artists, venues, community groups, activists and others, skilfully balancing the local with artworks and ideas which have national and global resonance. This ‘opening up’ of discussion, of spaces and of potential for collaboration demonstrates real integrity and ambition on the part of the biennial organisers. A key demonstration of this is the Artist Soup Kitchen Series devised for Conjunction and held four times throughout the festival to explore a variety of topics with artists and experts through round-table discussion. These events are designed to be a meeting point for the community, a site of support and a space to share ideas and experiences over a hearty meal. The series targets different audience groups, the first of which, Arts for a Change, brought together a group of artists and creative people working within Stoke and its environs on a range of grass-roots projects that use art to bring about a positive and meaningful change in the lives of young people, those with major health problems or in areas of economic deprivation. The Artist Soup Kitchen series also presents an interesting sustainable financial model within the biennial: participants can purchase their specially commissioned soup bowls at the end of the session, with proceeds going directly to designer Denise O’Sullivan to fund her practice. Participants are also invited to make a donation for the session which is given to the North Staffordshire African Caribbean Association (NORSACA) soup kitchen, which features in a film as part of the festival’s wider engagement programme.

The notions of community partnership, mutual support and meaningful impact have been foregrounded by Conjunction’s curators. The outreach programme which has been delivered by arts administration agency, Jelly Arts, covers almost every audience demographic, through satellite projects including James Capper’s documentary film on NORSACA who work with those in extreme hardship, to projects with Age UK on domestic collections and a camping expedition with the 21st Hartshill Scout group. Another notable example of this sustained engagement is artist Andrew Holmes’ Lych Gate, described as a functional sculpture for Hanley Park in the city centre. Formed of discarded materials collected locally, the work has been developed as a meeting place and shelter, and will be the site for a number of performances, walks and musical events in collaboration with the City Council and the Friends of Hanley Park, exploring the users and future uses of the park. Looking beyond the visual and reaching through to the public realm, Conjunction has therefore invited collaboration and dialogue with artists and audiences which aim to be a catalyst for positive social change.

­One of the other primary aims of Conjunction is to bring art to new audiences. The curators have employed simple means and tools to develop the low-level engagement with art in the city into something greater, be that in terms of physical accessibility by siting works in unexpected places, or conceptual accessibility through humour and narrative. Artists Michelle Rheeston-Humphreys and Katrinka Wilson operating under the name (h)edge kelektiv, exhibit these notions through their series of intervention works within the newly refurbished Glebe Hotel pub. The small scale works are playful gestures which invite discovery and discussion in this most social of arenas. The artists describe themselves as ‘sceneshifters,’ and their pieces include oil paintings theatrically hung upside-down, a mouse painted on to wooden panelling and a number of tiny cut-out paper people struggling through the syrupy dregs at the bottom of a pint glass. Perhaps their most significant work is a series of six black and white portraits, which, whilst appearing to be original prints are actually contemporary depictions of the pub’s regulars, thereby directly including and engaging members of the local community within the pieces on display.

The use of narrative and mythology as a tool to engage visitors can be seen in the works of Lloyd Worthington, (h)edge kelektiv, and the more widely exhibited collaborative pairing of Shaun Doyle and Mally Mallinson. These latter artists, who were in residence at The Potteries Museum & Art Gallery for Conjunction 12, have employed the method of intervention to insert “culturally transformed” objects into the museum’s collection of natural history, social history and archaeology displays. These witty and powerful works form part of The Neo Dawsonism Archive, with a narrative influenced by the Piltdown Man ‘missing-link’ hoax of 1912, purported to be the work of archaeologist Charles Dawson. Doyle and Mallinson’s pieces document a world where another race, homo tesco, have evolved alongside homo sapiens. The relics on display are documentary traces of this parallel species including Wedgwood Spitfire, Valuecene Clubs and Crystal Julie’s Protect and Survive Shelter. Drawing upon the history Stoke-on-Trent, the artists have developed a remarkable series of works using powerful juxtapositions of recycled, found and specially made objects within the museum vitrines to develop a false archive of material. The works use ideas of survival from history to tap into contemporary anxieties and issues, simultaneously exploring the survival and legacy of museum collections, material objects more broadly and indeed, the entire species. Their work seems to directly connect to that of Emily Charlton, who is exhibiting her participatory project Come, sit down and whittle, as part of Elements of Transition at the Flaxman Gallery at Staffordshire University. Charlton’s work for Conjunction looks toward a post-apocalyptic crisis (the ancient Mayans having predicted 2012 as the year the world would end) where members of the public might be called upon to “defend their tribe” using home-made weapons.

Through the use of discursive exhibitions, interventions, guided walks, workshops, performances and other events, the organisers of Conjunction have succeeded in activating the audience to become participants in the festival, presenting a series of real opportunities to discuss both the art of survival and the survival of art. The collaborative model of curating and varied ways of engaging with art that Conjunction utilise offer a sustainable future for the project, with a potentially longer lasting and more meaningful impact upon the community. Perhaps this approach is one way in which biennials can secure their own survival amongst competing pressure for funding and resources. For Conjunction, in terms of both the local and the global, art activity is addressed and assessed in terms of its impact on real people and places, and this social conscience is evident in both the festival’s engaging commissions and notably ambitious outreach programme.