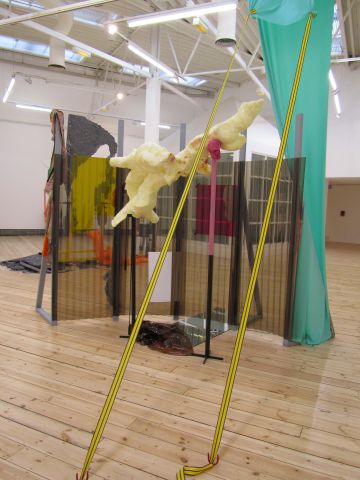 Contour States, Samantha Donnelly’s recent exhibition at Cornerhouse, primarily explores the body as concept, presenting it as a series of intimate and unnerving fragments: isolated skeins of golden hair, dismembered hands, the suggestion of soft flesh and crumpled clothing. In many ways the artist’s sculptural practice is reminiscent of a fashion spread, yet her glossy citrus colours jostle awkwardly against broken shards of material and abandoned objects which are clamped, stretched, amputated, chained up and tied down. The violence embedded in the work is connected to an evident sexual energy and further evoked through emotive titles: Contortionist (2012) and Blind Call (2011/12). Combining the explicit with the playfully anarchic, these ideas are most effective in works such as Detail (2012), in which the mouth of a glamorous woman from a magazine is uncomfortably placed under the leg of a tripod, an effect compounded by the whip-like braids coiled around the image.

The artist’s practice is absolutely rooted in the materials of its construction. Donnelly uses objects taken from the real world, whether found, fabricated or part of a personal collection, that inherently carry their own meanings and references. Her assemblages combine the traditional sculptural materials of plaster and wax, with materials from the fashion and beauty industries, such as bronzer, lace, and false eyelashes, and those more usually associated with hardware or construction, such as glass, house bricks and perforated steel, to form a multi-faceted narrative on the verge of collapse. The viewer is able to engage with Donnelly’s material contrasts and combinations on a number of levels: pink sweet wrapper cellophane, broken ceramics, spilt nail varnish; fur laid against gold leaf and soiled jay cloths in Sharp Orbits Fall Flat #1 (2012). Bringing together gendered materials, both luscious and dirty, her works are an adept conjunction of the fragile and punchy, the beautiful and the repulsive, the playful and the highly charged.

The edited, fragmented and theatrical qualities of the artist’s practice are a result of Donnelly’s background in photography, performance and moving image work. The pieces in this exhibition have been assembled using photographs to crop and reshape her accumulated objects and materials via a flat image, often reusing elements of old works. Theatricality is most literally evidenced in pieces such as Sharp Orbits Fall Flat # 2, (2012), with its carpet tiles laid out like a stage, or the far smaller Dada-esque Metronome: Talon (2012), with its careful balance of tiny unconnected components. Other of Donnelly’s works are reminiscent of make-shift shelters, such as Illusions of Supersaturation (2012), a green tent-like canopy tied with yellow cords. There are absent bodies throughout the exhibition: sets with no actors and dwellings with no inhabitants, only body parts. Donnelly emphasises these uncanny theatrical notions with mirrors and screens which divide and fragment the gallery, skilfully utilising the architecture of the space to suspend works from the ceiling and to anchor scaffolding-like components to the floor. She thereby builds a genuine physical relationship between the work and the site, as well as incorporating traditional methods of display such as plinths and columns.

The installations of Contour States pull influences of drawing, painting and collage into three-dimensions: linear components of rope and ribbon, a strong colour palette and cut-out imagery. The works are not cohesive. Instead, many of the disparate materials and objects used sit together a little awkwardly or appear hurriedly constructed, with materials lying in tangles on the floor, spilling over edges or hanging loose. The tiny details of Donnelly’s tactile assemblages invite close scrutiny, offering much for the viewer to consider, whilst the broad gestures she makes with colour, structure and material ask the viewer to take a step back to consider the work and its complex references more widely. 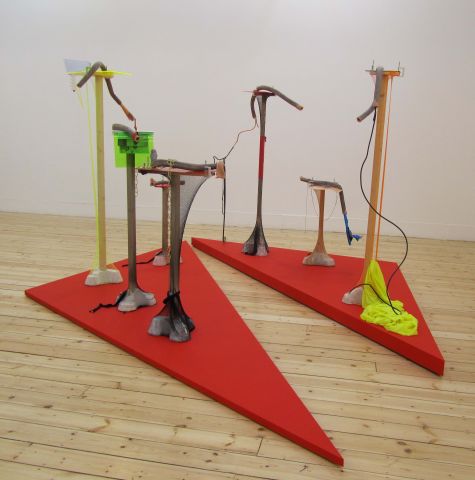