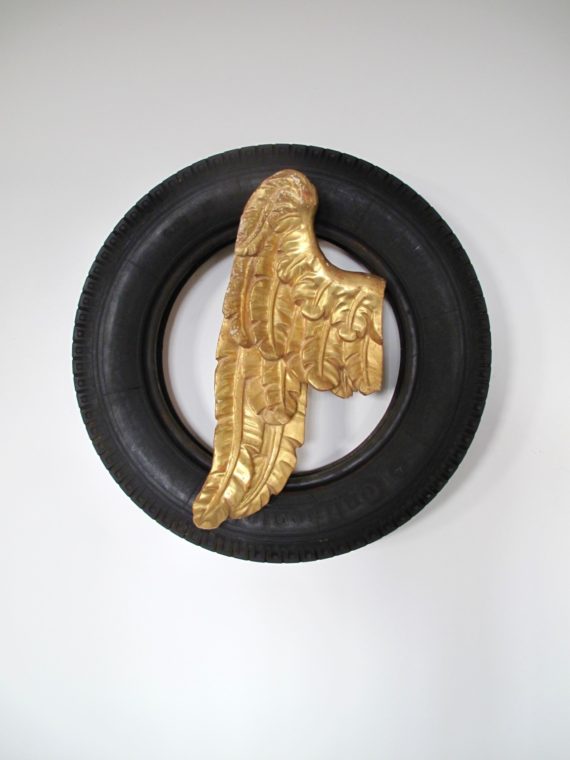 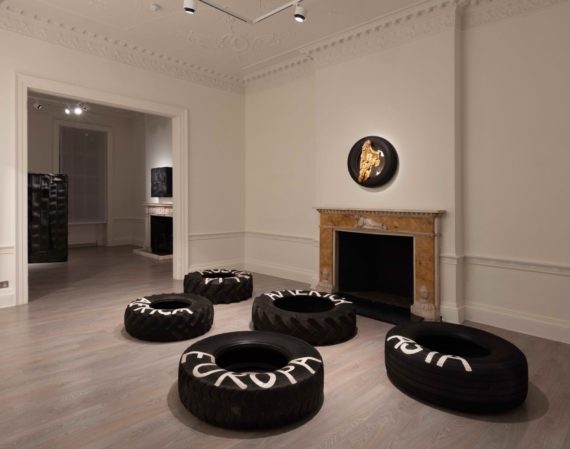 Walter De Maria’s famous installation New York Earth Room in a Greenwich Village apartment was one of the first things Paolo Canevari saw when he arrived in New York in 1989, and with his imperfect English misread “earth” for “heart”.

He was a wide-eyed 26-year-old and enchanted by this notion of 140 tons of soil spread across a second floor SoHo room being captured as the city’s very essence, and started on work inspired by it. It was a happily congruent misconception which he said he felt had a very poetic sense: “Interpretation has to be free, art is not dogmatic”.

And that has been Canevari’s guiding principle through a 30-year career, in which the poetry and the irony of coincidence is as much a driving force as visual effect, encapsulated in this exhibition of 30 works – sculptures, drawings and installations – over the four floors of the Cardi Gallery in London, his first solo show in this country. 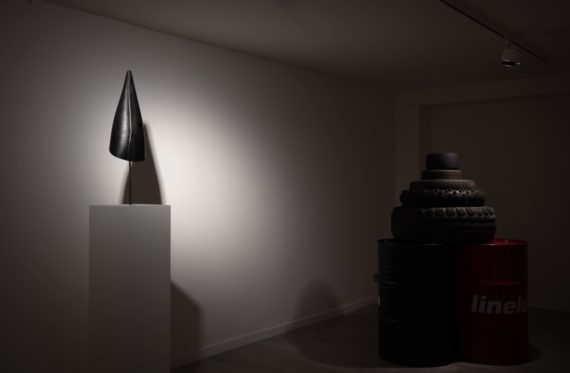 Appalled by the plutocracy of the global art market – particularly acute in New York in 1990 – Canevari turned his back on the painting tradition. He began to make the pieces with tyres and inner tubes that became his signature almost, fashioning shapes and sheets at the foundation of which is not just the rubber, the result of mineral surrendered by nature, but the automobile the tyres allow to travel across the earth spoiling that mother earth with another mineral. The message here is that however abused nature is by us, it will eventually prevail.

“I don’t really create the shapes”, he says. “The material makes the shape itself – I don’t transform something, just manipulate it to find the sculpture that is already inside the material”.

Now 57, Canevari believes that artists are born, and he comes from a family steeped in creativity as only the latest in generations of sculptors, painters, writers and architects. He feels the burden of history, both of his family story and the culture of his birthplace, Rome, where his studio is now, but also of the materials he works with. One of his best-known pieces is a partly performance work in which he bears on his shoulders the model of the Coliseum carved from a lorry tyre.

Canevari took his lead from the Sixties and Seventies Minimalists, such as Robert Morris, and the Arte Povera artists who made their work out of simple everyday objects, which he sees as the start of his trajectory. For a while in New York he was an assistant to Nam June Paik who taught him the value of seizing a moment for art but also, he says, of great humility (even though, with his faltering English and Paik’s heavily Korean New York accent they could hardly understand each other).

Cardi, a long-established Milan gallery founded by Renato Cardi, opened a London branch in a 17th-century Georgian townhouse in Mayfair in 2015, under the auspices of Renato’s son Nicolo. The Cardis have been showing Canevari’s work for more than a decade, and Nicolo’s relationship with the artist is a close one. He sees Canevari’s work, often black in both mood and appearance, as essentially offering signposts, rather than answers, to some of the world’s fundamental issues – conflict, censorship, globalisation, religion, colonialism – and he has chosen this particular moment to give his friend a museum-size retrospective in the art market’s centre, believing, he says, that “art and culture are key for a healthy society and a ray of hope in these tragic times”. For Canevari, even destruction leads to renewal, a reconstruction, and so his work is essentially optimistic. 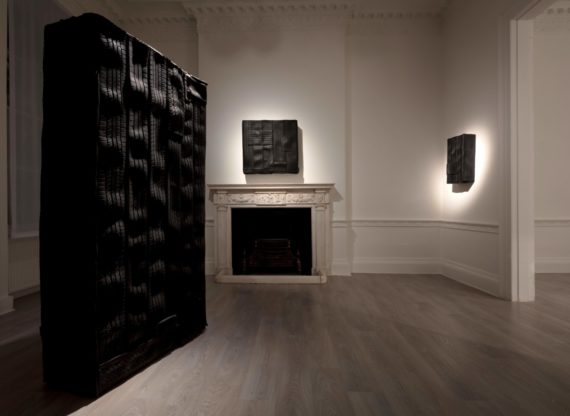 He calls the black rubber Materia Oscura, something that metamorphosises, that has already had several mysterious lives and is also contemporary, but that also has a black aspect and represents, less optimistically, a terrible peril to our natural environment if we don’t act. Materia Oscura is also the title of the earliest piece in the show, 30 vulcanised inner tubes made into a sheet and allowed to fall over an object – “to relate a strange, bizarre, peculiar material in a different way, trying to find the shapes that would give a meaning to the work”. He does not deal in “found” material like the DaDaists, he says – a piece of Carrara marble has had a previous existence before becoming a Michelangelo sculpture – but gives it a new meaning, and it may subsequently have others.

Canevari makes gentle political observations rather than statements, so that a piece from 1998 is a sheet of inner tube stitched in the sleek shape of a cone, but with eye holes cut into it giving it its title, KKK, suggesting that even this evil has a timespan. One of the meanings of a circular tyre is to represent the cycle of life itself, and there is a poignant example in Angel. This is a large tractor tyre with a gold-painted wooden angel’s wing traversing it. The wing was part of a 16th century angel bought by his father who sold it on but kept the wings. The piece, made in 2004, came following the death of a cousin.

One of the most powerful statements is JMB, missiles bearing the names of Jesus, Mohammed and Buddha. It is the last in a triptych and has only been seen in public once before. The first two were three hire cars parked across a highway outside Bangkok with the three prophets names painted on their black cotton covers; the second was three caravans parked in in front of the French Academy in Rome. The three prophets, he says, preached tolerance, love, and peace yet in their name endless war and destruction is waged. In the Second World War it was the practice to paint the names of the intended victims on the bombs before they were dropped.

The current work, his “landscapes”, is better defined. Canevari has taken recycled paper and either soaked it in used motor oil or, for the bigger spaces, brushed it on indiscriminately, giving the image what he calls a “fumantura”, a mistiness, and then mounted them using elaborate gilded frames from the 17th, 18th and 19th centuries. “I love the friction, the opposition, between a material that is raw – used engine oil – and these very refined frames.”

The exhibition opens just as a political row is developing in the UK about the preservation of monuments. As it happens, Canevari once made a piece with the Statue of Liberty toppled and lying sideways on the floor, representing the downfall of the state as a result of globalisation; a simple gesture, he calls it.

And for today’s issue? “For me, monuments have lost value. You don’t need to glorify anything at the moment. I think that glorification comes with a failure of humanity – for me, a bombed building is much more of a monument than another statue. I don’t need a statue in a park to remind me of the value of someone. Much more powerful would be anything that comes from the failure of humanity.” 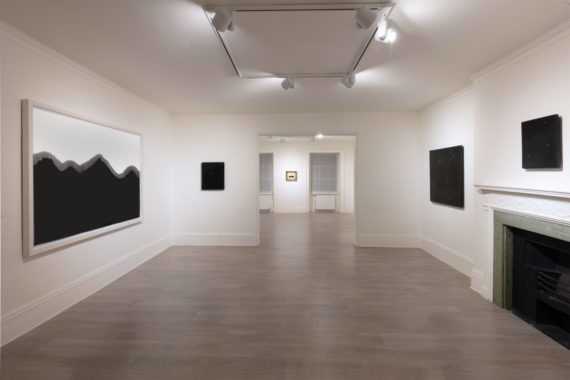 Paolo Canevari is open until 6 June at Cardi Gallery 22 Grafton St, Mayfair, London W1S 4EX open to the public to visit in person from 12th April Monday to Friday 10am to 6pm and Saturday 10am to 5pm. www.cardigallery.com

Simon Tait is the editor of Arts Industry and a senior art correspondent for The Times and The Independent, The Art Newspaper and The London Magazine