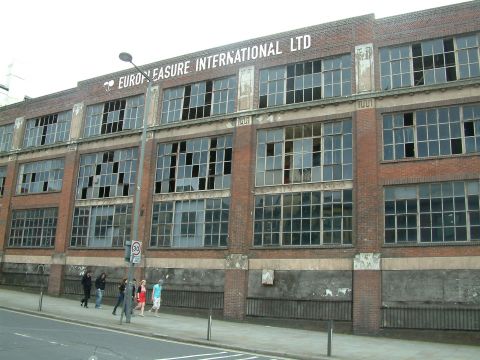 When you enter the swing doors of the derelict Europleasure International building you are immediately immersed in a fairground version of The Beatles 1968 song ‘Revolution’ which instantly sets the tone and atmosphere for the artwork. Directly facing you, beyond the viewing barrier, amongst the debris and red painted girders you are presented with a large screen showing the video of Spanish artist Cristina Lucas, “Touch and Go”.

As with all video art the time element is crucial. As a viewer we need to be made aware of how much time we are expected to invest. We also need to know if there is a specific narrative which requires a sequential reading of the piece. It is annoying to discover that the information label for Lucas’s work does not include the running time; fortunately it does not alter your experience of the video if you randomly enter the film at any given moment, though it could spoil the “punch line”.

The film shows a succession of men and women of pensionable age, arriving outside the Europleasure building and throwing stones at the windows of the abandoned warehouse. Most of the protagonists turn up ready and armed with a stone, others collect their weapon from the nearby pavement and then, in turn, create a deliberate act of vandalism by hurling their stone through a window. The humour relies on the fact that these are “grown-ups” who should know better than to fling stones at windows, even if it is in political protest. However, protest is not the dominant theme of the video as comedy and farce outweigh the political message. Using Silent Comedy film techniques, such as the reliance on facial expression and appropriate music to add meaning, Lucas has created a funny film which resembles an early Saturday evening ‘candid camera’ TV programme; all that is absent is canned laughter at appropriate moments. Embedded in the soundtrack are interludes of plucked stringed instruments which also add comic effect.

Her choice of music speaks volumes about her purpose, the fairground soundtrack creating an atmosphere of frivolity. It also invites us to make an obvious comparison between stone throwing and the fairground coconut shy. We can only guess that Lucas’s use of The Beatles “Revolution” is ironic since the lyrics appear to condemn the destructive act: “But when you talk about destruction, don’t you know that you can count me out”. Maybe Lucas is presenting her collaborators with a second chance at protest or helping them to recapture their “mis-spent” youth.

The slow motion technique used throughout helps to emphasise the deliberate actions of the characters who appear delighted and proud of their transgressions. Their stone throwing communicates as a premeditated, one-off act which induces in them feelings of guilty pleasure.

There are pauses within the action of the film when the camera switches to an inside view of the building and focuses on the consequences of the stone throwing. These sections appear detached from the thematic comedy element of the video and indeed are accompanied by more ambient sounds. Slow motion is employed to beautifully capture stones travelling through window panes, smashing glass cascading onto the stone ground. The light bouncing off the splinters along with the complex spinning and rotating fragments make these moments aesthetically compelling. The broken shards of glass appear weightless as they gracefully fall to earth. Within these fragments of film lies a poetry which resonates with a dynamic clarity of material, light and movement. In this way the alleged element of protest is de-fused and the “sting in the tail” is replaced with a creative vision born of the destructive act.

The action gradually picks up the pace and there is a frenzy of stone throwing before the film ends. Now we see a final wide angle shot of the building played out in real time and devoid of music. The title of the work, “TOUCH AND GO” is revealed in the broken panes of glass as a passer-by walks down the road oblivious of the message high above.

The curiously named Europleasure International building is cleverly used as the venue for Lucas’s video. Once outside the building you can now occupy the area where the drama was played out in the making of the film and view for yourself the message in the windows. Without prior knowledge of the film you could easily be unaware of the work; it would remain just any other neglected commercial building within the city.

The colloquial phrase “Touch and Go” alludes to a dramatic and pivotal moment in time. This video fails to convey a fundamental message of the flux of commercial enterprise and its impact on ordinary people. Lucas’s reliance on comedy detracts from such serious issues as unemployment and protest and therefore this artwork is almost bound to be enjoyed on a superficial level. In the words of the Beatles, “You can count me out”.