A week’s overlap between Sally Annett’s two exhibitions at Bletchley Park and Wrest Park in mid-July provide a serendipitous moment in which to catch the full breadth of the project that Annett has been developing over several months. These two stately homes could not be more dissimilar: Wrest with its stunning Capability Brown designed grounds and faded grandeur; Bletchley surrounded by an auspicious assortment of outbuildings which housed a defining moment that changed the course of twentieth century history. With this weight of history underscoring her work, Annett has done well to bring together elements from their two distinct collections to create a body of work that speaks of common history, memory, and the transitory nature of time.

Starting at Bletchley Park, the home of Alan Turing and the Second World War allied codebreakers, Annett responds to the archive of material still available within the collection. Annett’s work at Bletchley Park is specific to this period, and the individual lives of the men, and particularly the scores of forgotten women, who worked there. We now know their essential role in ending the conflict and destroying the rise of fascism, but for years their position has been shrouded in secrecy, many passing away without their pivotal role being acknowledged. Much of the collection was saved by enthusiasts; squirrelling away any pieces of interest that they were able to. Some items are utterly harrowing; the intercepted announcement of Hitler’s death, an order exhorting all men to fight to the last and follow the Fuhrer into death. Others are charming, photographs of the amateur dramatics hosted at the hall, the performers dressed in elaborate costumes. These fragmented snapshots underpin Annett’s work and emerge from within the prints.

Throughout the project, Annett has been keen to bring the staff of each Park into her work.  This is a way of making public the personal predilections and specialist knowledge of the volunteers, staff, and curators, who through their commitment and enthusiasm, bring these collections to life. One such curator, the senior archivist, Guy Revell, was on hand during my visit to present a selection of items from which Annett had drawn inspiration. His passion for the material, (essentially scraps of paper, blueprints, hand written notations) transforms these items, drawing out their rightful significance and place in history. Through the staff’s interpretations of these materials, we understand the tireless commitment of the codebreakers and their significance to the war effort.

Despite the cutting edge technology that was available, it is evident that human minds and human hands were a key part of the process in cracking the codes of the Nazi’s enigma machines. It can be ascertained from the collection of materials how this was achieved by identifying the individual styles and idiosyncrasies of the German operatives. The incoming messages were scoured by the Bletchley Park codebreakers and eventually they were able to recognise which German operative was the author of a particular message by their singular styles; this inevitably lead to the cracking of the enigma codes. This human side of conflict is present within Annett’s work at Bletchley Park, and paramount to the constructed images she creates.

The machine devised to crack the Enigma code, The Bombe, looms large within the work.  It is inescapable. Its role in Bletchley Park dominates and its circuits form De Stijl-esque patterns across the print series. We have motifs taken from its schematics and blueprints. Yet there is always the human presence: photographs of the codebreakers at work and play, merged with their individual hand notations found on the intercepted transmissions. All of these are embedded within Annett’s prints. The richness of this material is underscored throughout the work, as is the symbolism of the rose, a nod to nationalism and the British history that links both sites and quietly informs the project. Annett’s research has unearthed older links between spaces, places, codes, and cyphers, which continually highlight the Polish influence. From Trithemius, Bishop of Sponheim in the 15th and 16th Century, through Meir Poppers in the 17th Century, and into the 20th Century with the Polish mathematicians Rejewski, Zygalski, Różycki, the nuanced Internationalist aspects of the project are key to Annett.

At Wrest Park, I look through the wallpaper collection in the onsite archives. This provides a valuable insight into Annett’s work. It is the basis of the motifs that appear within the prints at Wrest. Rescued by the GLC from homes earmarked for demolition, the wallpapers were removed layer by layer and preserved. One home uncovered seventeen layers of paper, dating from the 1980’s back to the Victorian era.  These fragments are archived together in chronological order, a testament to our changing tastes, but also to the production of such papers: from the beautifully embossed and hand-painted to the machine manufactured. It is the history of progress and the shift from the privileged to the democracy of production. The papers are stunning despite their condition. These papers attest to the quality of craftsmanship and flare for design

At Wrest Park the presentation of Annett’s work is much more coherent and is allowed to engage more with the location. Within the main house, a room has been set aside, and within this space the prints interact with their surroundings. They blend so well as to seem a permanent fixture, and maybe the currently empty Print Room could be made their permanent residence. However, it is within the dairy that the full scale of Annett’s work can be fully appreciated. Amidst the limestone garden sculptures, Annett has mounted her prints upon wallpaper produced by Little Greene, a firm, who until recently, worked with English Heritage and specially commissioned papers based on those historical fragments from the archive. Annett’s prints reference the beautiful patterns taken from decades of overlaid papers, removed layer by layer from the now demolished homes.

The prints themselves, drypoints etched into metal plates, weave together a tapestry of sourced materials. The quality of the mark-making lures the viewers into the entwined assemblages. The drypoint, a medium requiring a certain amount of pressure to etch the plate so that the ink can be trapped in its furrows, gives a clear sense of the artist’s hand. There is a tension in the marks, a robustness that corresponds with the papers, surviving for decades. Their appearance might be delicate and subtle, but there is a strength and tenacity mirrored in the work and the papers.

Within Annett’s work, scraps of these papers appear: a stylised bird, an elaborate pattern. These are etched by hand in the prints and heavily inked so that the components lift themselves from the mottled background. Again they excavate themselves from the weight of time, the greasy printing ink almost a stand in for the nicotine stains, the soot, and the grease trapped in time between the individual layers. On the surface, sits the residue from the rose petals used within the print process, referred to by Annett as Rose petal transfer engraving. Laid onto each inked plate and run through the press, the rose petals hold the ink from previous pressings and deposit it back on to the subsequent layers. However, this is not all that the petals impart. The pressings retain the oils and this adds a subtle hint of colour to the prints; a tinge of yellow or purple, a bruise on the print. These wallpapers were never meant to outlive the families who installed them, yet they have done just that. The wallpapers are a testament to their domestic lives. They bear witness to the happiest of times: births and marriages, as well as the saddest, illness and death. Annett, with care and precision, captures all this within her prints.  Only the street address of the house is recorded in the archive, and not the inhabitants, yet within the prints their anonymous lives endure. This project of Annett’s is profound and touching, uncovering those absent from history, the glimpsed figures within an archive. Annett gives them new life and takes inspiration from them: their work, their domestic lives, themselves. Annett’s systems of philosophy lays bare the connections. 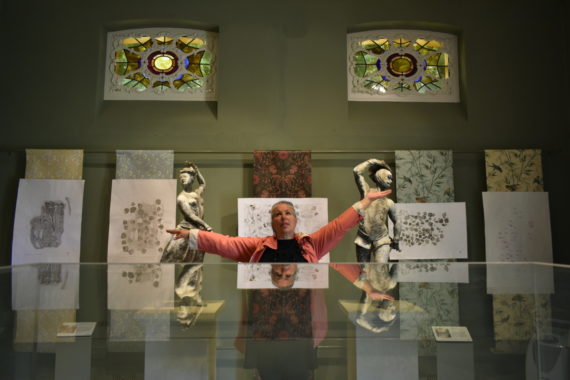