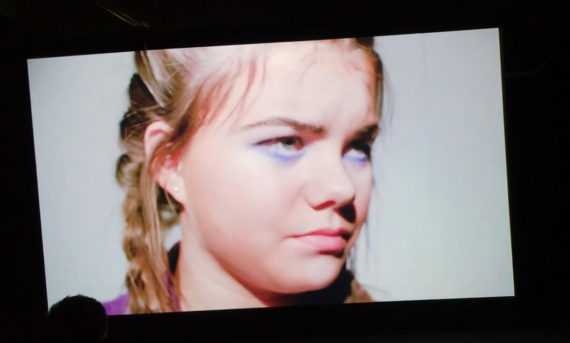 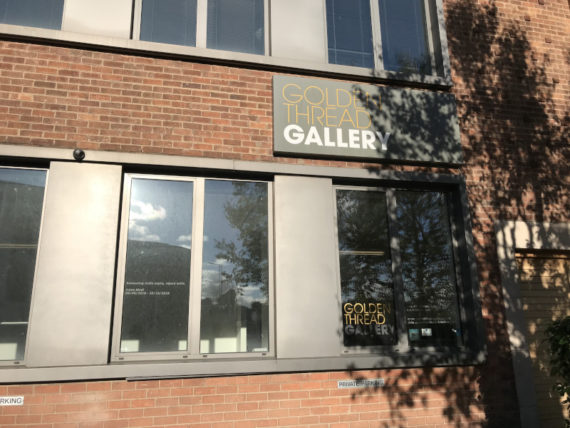 I wander through the city of Belfast.

To see a show titled ‘Death of a Hunter’ by Oona Doherty.

Its my fourth visit to the city.

but the first time visiting a gallery here.

Its a city that fascinates me.

It has a dense and richly textured history

Thats full of both light and darkness.

The recent past history of Northern Ireland is difficult.

I’ve often wondered how art can play a part….

in the healing process.

I find the gallery and enter it.

There are two rooms, so I pick one of them. 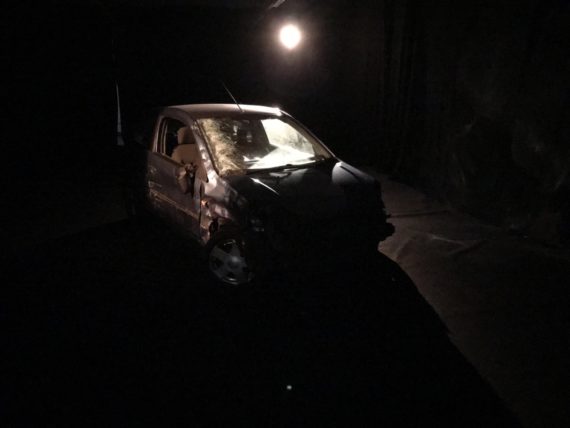 The room is dark with a small shaft of light concentrated on the broken and beaten body of a car. There is a corporeal property here, but it not a given fact thats predicated on the basis that Doherty likes to work with the human body. It genuinely feels that this car is the representation of a broken body.

Audio fills the space and gives a tacit suggestion of spirituality and religion. I easily slip into the reverie of others places, finding myself viewing a ‘laying in state’ corpse of a past history that is fragmented with darkness. The corporeal quality is brought back into focus as a series of Belfast voices punctuate the soft spiritual sounds that swirl around the room.

‘Death of a Hunter’ is the name of the show and this could in-fact be the hunter, laying here in state for mourners to pay their last respects. What I see begs the question ‘has the hunter become the hunted’? This could be a theme in this exhibition, that of asking how we deal with the legacy of the past. 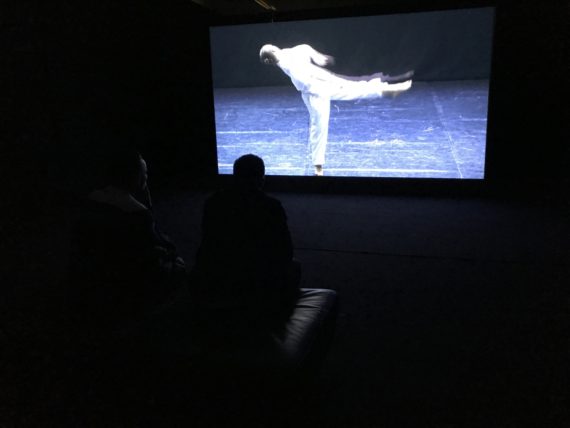 I move onto the main room, where its also dark. There are no objects here, expect a small bench to sit on. Short films are being shown, five in total. I’m in the gallery space, but now leaving it and stepping out into Belfast via the large rectangular projected space in front of me.

Careful consideration has been given to the viewing experience and spatial perception. Clever shots make it feel like the actual performers are in the room. The films gets down to the ‘meat’ of the matter, literally with some mesmerising close up shots of raw meat and pugilism in one film, another shows a young man displaying cathartic behaviour and in others we see Doherty herself performing choreographed dance sequences. 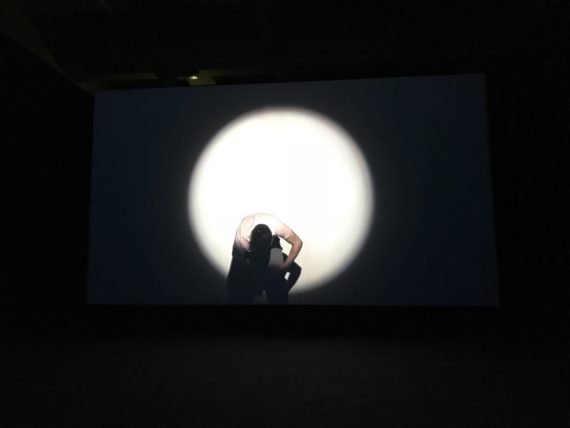 Throughout the films, there is a narrative that steadily swirls and weaves its way around the people and places on the screen.

The films are collectively titled ‘Hard to be Soft – A Belfast Prayer’ and portray:

The art in the show questions established stereotypes and may perhaps even issue a collective challenge to society itself to move on and exit the previous episodic darkness. There is obvious strength in this idea, where culture becomes a collective strategy to challenge the society that we live in. Take the French thinker Georges Bataille work on the subject of Transgression for example. He noticed that society routinely transgresses the accepted norms without ever challenging itself. As a result, more and more things become permissible and the accepted norm until some kind of event occurs that will essentially force society to challenge itself and re-examine how it has been behaving.

Isolation and alienation have long been a subject of art. Typically artists work alone and become acutely aware of it and this becomes a theme in their work as seen in the shadows and empty world’s of Giorgio de Chirico’s metaphysical paintings, in the vistas and interiors of Edward Hopper’s depictions of American society. Wandering around the Belfast area, we can easily observe such vistas.

However what is being displayed here are universal conditions, that are generally depicted as being classless and also somewhat romantic and desirable. Although Doherty’s work is poetic and visually beautiful, she challenges any notions of romance towards some of the problems that are found in a Belfast working class society. A more accurate contemporary parallel of the exploration of the class systems and culture can be found in the work of artists such as Stephen Willats, Tracy Emin and Richard Billingham.

The exhibition notes summarize Doherty’s intersection of art and class:

‘She challenges our expectations of what are often considered elitist practices by forefronting social realities that are so often neglected in the arts….

She explores the complexities of working-class lives in Belfast, particularly of young people colloquially referred to as ‘smicks’ (often in a derogatory way). Her work contrasts – beautiful choral passages accompany the sounds of violent and angry exchanges and her dance shifts from delicate grace to frenetic disarray. In this way, the conflicting emotions of everyday life are laid bare’

At the end of the show, I was left wanting more of the beautiful cinematography that I had just watched. The ideas were clever and the use of simple objects and things to build a complex narrative really worked well. This was accompanied by the skilful dance work of the artist herself.

Ontop of this, a potential warning message can be derived from the show. That we should be cautious that such things as social alienation and isolation do not become the accepted norm within society. It challenges us to examine our own habits and attitudes towards this.

Ultimately ‘Death of a Hunter’ is a show that effectively connects the artists practice and visual language to the area.