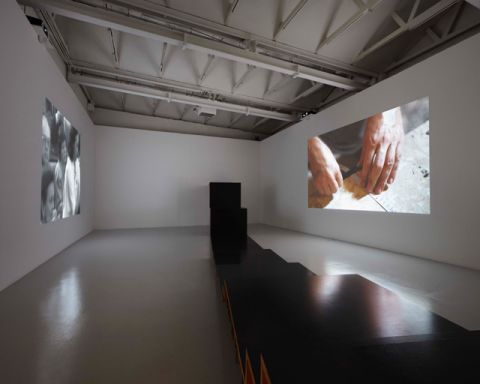 Frequently issue based work can come over rather pathetically in comparison with the magnitude of the over arching issue itself. Passionately caring artists regularly find themselves stumbling into the pit of well meant re-iterations. I do not suggest that as artists we should not grasp the nettle of what concerns us. But we do need to recognise that interesting issues do not in themselves equate to interesting art by mere regurgitation alone. This particular kind of marriage demands a more charismatic and considered consummation.

Adding to this observation, architecture and sculpture have also always been somewhat curious bedfellows. Sculpture still often the accidental afterthought and the best buildings often accidental sculptures by default, albeit with an added dose of function. Indeed Art/architecture Collaborations over the last few decades have spawned a mix bag of results. It is almost as if they can both kind of play the same sorts of instruments, it’s just that one is much better off doing an acoustic set. Rarely do they harmonize interests to mutually good effect.

Consider the fact that DAAR are dealing with art and the architecture and borderlines of the Palestine/Israeli conflict in the West Bank as their creative start point, then its fair to say that with this set of variables the stakes are high. But to say that this show simply rises to the challenge is frankly an understatement. For it rises to it with a grace, aplomb and formal intelligence, that it is an utter joy to witness.

The initial level of encounter is physical. In the first space a thin wall of form redolent in part of a Richard Serra piece zig zags from high to low through the space. As one draws closer various architectural references reveal themselves. Sculptural forms of building shapes sit on its ridge and immaculately etched map symbols show areas of trees, and other information. Regardless of any contextual information this is a wholly succinct and fascinating form which entices and holds the eye with ease and efficacy as ones secondary reflection kicks in. A bit more background information gleaned and the tertiary level of comprehension starts to shed light upon ones instinctive formal response. This calm and meditative work is emphatically paradoxical in terms of its charged content.

The work refers to a line on the map that was drawn to separate out Palestine and Israeli territory in 1993. The line scaled up represents a 5 metre borderline of neither nation state. A beautiful gentle form exploring an area of tragic political conflict, territorial dispute and explosively violence. What I enjoy about this work is its ability to engage with subject on a deep and intelligent level, coupled with its ability to keep true to its intentions as a bit of ‘visual art’. It has a resolute resistance to the predictable and easy path of quasi journalism.

The other work I will single out is a humungous spatial intervention. And again this same issue of territorial conflict underpins the work. I say underpin as again the work is formal first. The issues are essential for the viewer if they are to get the full hit, so to speak, but even without that knowledge, it is still a sight to behold and contemplate.

A flight of black reflective acrylic steps descends into the main front chamber. It is suspended by numerous thin black chords which evoke the elegance of an extrapolated harp or string instrument bisecting the space. The chords enter the suspended ceiling to tie the work and space together. The stairs fall to a plateau then gently rise up a smaller amount on the other side. The work is an immaculate example of spatial sensitivity. The sensually calm and reflective form is a sharp counterpoint to its conceptual departure point. The work is derived from a cross section of a built, but never used Palestinian parliament building bisecting the disputed borderline, neither entirely in Israeli land or Palestinian. Again this synthesis of the political into the sensually evocative is what makes this delightful show a pleasure to visit. It is both candy for the eye and food for the mind. As a viewer it generates serious contemplation on this dreadful situation but manages to do so with utterly poetic elegance.