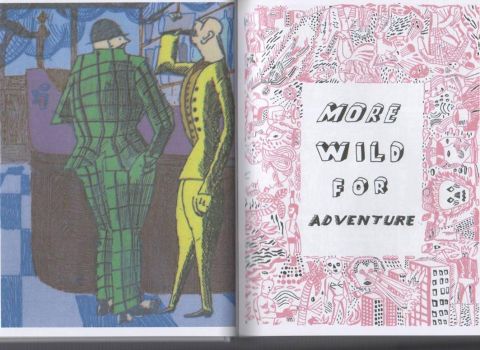 The Die Is Cast

The Die Is Cast is printed on off white paper recycled paper with grey text, the design is beautiful in its simplicity and subtlety; it is bound with a single staple. With a clever layout and binding this small book of only 16 pages splices common clichés together, for example instead of the two habitually used phrases ‘you cant judge a book by its cover’ and ‘call a spade a space’ you get ‘you can’t judge a spade’ and ‘call a spade a book by its cover’. The only common phrase kept in tact is ‘warts and all’ on the centrefold. By reshuffling these clichés the book creates a tension between the old and the new, between logic and chaos.

Drawing Paper is a not for profit newspaper/ publication concerned solely with drawing in its varying forms. It is printed on newsprint and had no binding as with a traditional newspaper. It was limited to 3000 copies, with no adverts and was freely distributed, with each artist paying an equal share for their space within the publication. Drawing Paper gives the inherently ephemeral medium of drawing a kind of permanence. Drawing Paper was conceived and designed by Mike Carney and Jon Barraclough, Liverpool UK. www.mikesstudio.co.uk / www.jonbarraclough.co.uk

John Broadley is an illustrator who lives and work in London, he has been making books for the last 10 years. Each of his books are produced in a very small edition, some of only 10 copies. His work has a somewhat vintage feel due to stylistic connections with print works from the 20’s and 30’s. This book presents a complete record of his publications to date; the covers, sketches, notes, content etc. for the reader to navigate. It’s a treasure trove of the quirky variety that is Broadley illustration.

Confessions Of A Recovering Data Collector

Artist Ellie Harrison was an extreme data collector, from documenting her every meal to her bodily functions; it was an obsession that was the core of her artistic practice for over 5 years. When she realised how intense this introspective and almost compulsive behaviour had become she decided she must quit. She turned to Sally O’Reilly who became the therapist who implemented the treatment ominously known as Hysterical-Historical Praxis Therapy. This book examines the implementation of this therapy and its effect on the artist.