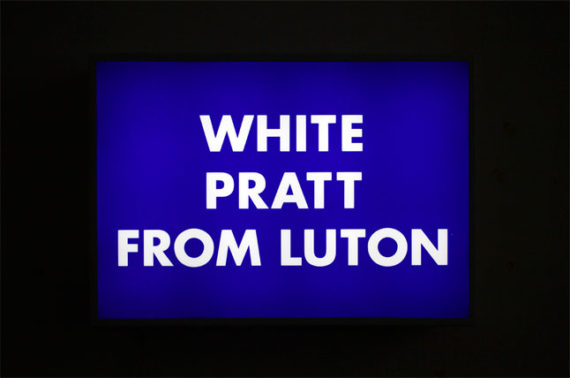 One of the things I love about being an artist is it takes you to places which otherwise might be off your radar as an art fan. Like Luton, for example. With the Metropolis only 30 miles away, it’s easy for a place like Luton to get sucked into an artistic vortex. Proximity to the London art world makes Luton’s cultural position rather challenging. Many orbiting towns wander down the route of commuter belt pleasantry and artistic blandness, subconsciously surrendering to a position of inferiority. So how can a large post-industrial town like Luton assert its cultural validity and voice in a meaningful way? A two pronged attack on part this problem comes in the collaboration between ‘As You Change So Do I’ and ‘Departure Lounge’ with the temporary Gallery ‘Storefront’.

Located on Bute Street opposite the Hat Factory complex. Storefront has presented a range of artists interrogating ‘Luton’ as subject, but never in a half- baked apologetic sense. Under the direction of Matthew Shaul it has a clear critical edge and is anything but provincial in its agenda. The current show by Dominic Allan is a great example of this. The artist is from Luton and articulates this emphatically, via his artistic persona ‘Dominic from Luton’. His work explores his personal heritage in a starkly playful self-deprecating manner. It wrestles with the intimately personal world of life and family and its place as subject matter in an internationally complex world. A series of 3 photographs show an elderly man (the artists father) sat in a wheelchair at home, sat looking at the sea from the promenade and being accompanied by an apparent loved one, whilst looking at the empty sea and beach. They occupy an emotive kitchen sink aesthetic and purvey a powerful sense of family, embroiled with the dislocation one feels, when watching loved ones gradually fading into old age.

Most of us, whether artists or civilians, live pretty ordinary existences. This sense of the everyday and its potential for poignancy is a central plank of the work on show. Indeed a celebration of the ordinary stuff, which governs all of lives, regardless of our origins, simply oozes out from the work. Ans as an artist Dominic Allan steps back and frames this ordinariness for others to see. A great example of this is the large window transparency of a small brick wall in a small suburban Luton front garden. Okay it looks slightly at odds with its surroundings, sitting as it does at a free standing jaunty angle. But as a work it is fundamentally ordinary and lacking in even the slightest whiff of an artistic ego. Probe a little deeper and you get to realise this wall was constructed by Turner Prize winner Martin Creed, during a series of public interventions convened by Allan. The funny thing is, it still lacks an ego, even when you know it’s a Creed, even when you go off to find the wall itself. This intervention and punctuation of the ordinary by the gently tweaked ordinary is a glorious swipe at the oft bullish banality of so much public art which more often than not, resolutely fails to engage with place.

This celebration of the anti-hierarchical object, be it a cut out of his dog spinning round slowly on a motor or the joyfully uplifting light box emblazoned with the text WHITE PRATT FROM LUTON, cuts across this show. A cluster of Tesco and other carrier bags are pegged on a string. Again ordinariness gently re-framed. In many ways, in its essence, this show is understated humanity embodied. And if ever there was a time and need for the re-emergence of humanity, with all its pathos, it is right here right now on planet Brexit.

A sceptic may be left thinking, and….? And that is part of the joy of the show, it asks a lots of and…? And this is work that is difficult to be ambivalent about. This is art treating the world as a speculative creative playground. It is art healthily taking apart the world as encountered.

Plato commented on how the best form of humour was at one’s own expense rather than at someone else’s. The title ‘English man going insane’ seems wholly apt for the show and is imbued with this spirit of laughing at ourselves. One of the few things the English do well, (whatever being English is) is to take the piss out of ourselves and of our worlds as a way of getting to know them, rather than as an act of denigration. I’ve been commuting to Luton and have seen the show over half a dozen times and it still makes me smile.