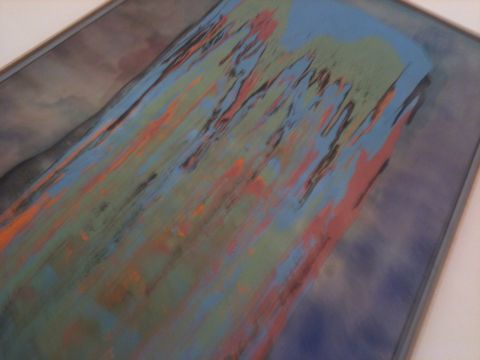 Currently on show at the Tate Britain are a selection of Frank Bowling’s poured paintings from the mid nineteen-seventies. The exhibition takes us back to an era that represents one of the most radical and exciting times in modernist art, something that Bowling consistently contributed towards in his experimental pursuit of new frontiers of visual indulgence. The paintings used what Bowling referred to as his ‘wet-into-wet’ technique that would look to mix and merge different acrylic paints together into a continuous and effluent flow.

In total, there are twelve pieces on show in the Tate Britain exhibition. Seeing these up close for the first time, the multi-layered texture of dense paint brings out a new dimension that images on a screen, or from a textbook cannot re-produce. It breeds new life into the swathing mixture of colours that turn into and out of each other, the luminous ebb and flow of colour sprawled across canvas.

In some of the works we catch obscure glimpses of what we think look like traces of human figures, the most obvious being the little girl in ‘Pandora’s Box I’. In others, such as ‘Crevice Reflecting Morning Light’ we see the faint print of newspaper reems used for canvassing behind the paint, placing fragments of human life that poke out of pieces so abstract as to initially defy being placed in our world. It is this sense of delicate ambiguity in the works that helps summon the true power of their abstract presence. There is an intriguing irony to be found in these paintings, that a form of art-work so technical in its production could give birth to an overall effect so analogous and difficult to articulate. The impression they leave on the eye is distinct yet intangible.

Having become increasingly interested in abstract endeavours into colour upon his arrival in New York in 1966, Bowling began his experiments in paint pouring in the early seventies. He constructed a platform upon which he would tilt his canvas so the poured paint would drip downwards at varied angles and speeds, with unique and innovative results.

As the acrylic tide falls down and inwards into a pit of dense colour, the shape of the drip reveals the life and energy of a piece that in truth now stands still, dead yet eternal. We can only imagine the actual happening of the works in Bowling’s nineteen-seventies studios in Kensington and New York, the pools of coalescing colour that merge and flow amongst each other, the process unfolding before Bowling’s very eyes, as he sat there, a mere spectator to his own art.

This remote dislocation of the artist is what makes the abstract art that Bowling created in the seventies so innovative and bewildering, the idea that it represents something completely beyond human intention. The loss of control helps the artist submit himself to the organic and autonomous being of the work. Putting the necessary devices aside here, it is the colours, accompanied merely by the age-old force of gravity, that play themselves out here before us.

The year-long exhibition will remain on show at the Tate Britain until March 2013.