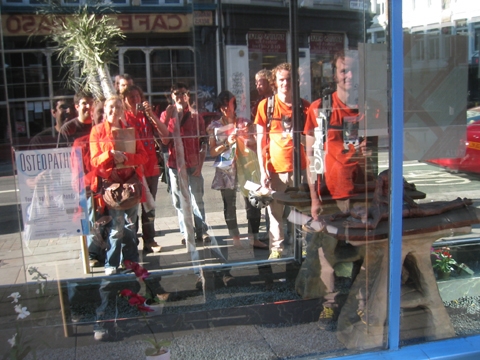 Apparently there is something strange happening in and around the Five Years Gallery: the A.A.S. are investigating a ‘zone of instability’ and are trying to avert a disaster. The peculiar happenings seem to be originating from East End galleries. The A.A.S. believe that galleries are in fact fronts for highly illegal activities or head quarters for hostile organizations.

The A.A.S. is an undercover organisation carrying out various absurd but covert operations. It is formed from a changing collection of agents and “participants are absorbed into particular projects as required”1. but their suspicious behaviour may give then away. The members are given pseudonyms such as Mule, The Viking, The Philosopher, and the Shadow; their special skills, aims, and weaknesses are also recorded.

The Five Years Gallery is currently the A.A.S. control room. As a visitor you can riffle through their recent espionage activities. The spy ring was mapped out on the wall with red string and pins – each linked to an area in the centre then linked to images and text produced from and for the spy event that had occurred at that geographical location. They do seem to be obsessed with poisoning, but I suppose this is the espionage vogue at the moment. The agents’ activities include taking ‘participants’ to different shops to spell out words from the first letter of each shop, code words most be exchanged before play can commence.

The participants’ notebooks contained information gleaned from surveillance activities in the form of notes, sketches and diagrams. Visual data was also presented mini photographs collected papers, perhaps evidence. These were quite beautiful. One of the A.A.S. participants read from this during the opening, but its content was still inaccessible to me. They also had the entire electrical grid of Birmingham on microfilm. How could I not respect these intellectual superiors now? I was in awe of the breadth of the data.

The A.A.S.’s underworld was accessible but so deep with layers of information that to truly comprehend in its entirety was impossible. What you saw was the surface of what appeared to be a total system.Through the spying activities the protagonists respond to the signs systems and structures of the contemporary city but disregard their conventional meanings. They map out a sub system: one that questions the authority inherent within these signs and systems, creating their own, subversive to the core.

Their work reminds me of the absurdist Dadaist events where their actions appeared to be absent of any logic, in response to the barbaric First World War. This same bureaucratic, state sanctioned logic has again brought us to a war on terror where every third person could be a terrorist of some kind. Every time I go on the tube a disembodied announcer advises me to report unattended luggage and suspicious behaviour.