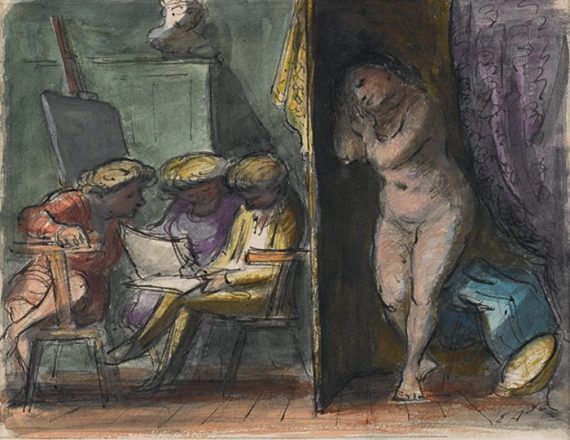 Many of Britain’s mid-century artists have enjoyed a renaissance in recent years, with Eric Ravilious and Edward Bawden (close friends, and both taught by Paul Nash) now fairly recognised after having been unfashionable during the shock and awe years of the YBAs. Perhaps part of the reason for them being forgotten was just how popular they had been, how familiar their work is: they produced commercial work for clients like Shell and Penguin, worked for the government as war artists, used new print techniques to produce mass editions, and decorated ceramics.

Edward Ardizzone followed a similar path, and it’s time for his work to be re-examined, so that he can be considered alongside Ravilious, Bawden and contemporaries as a great British artist. 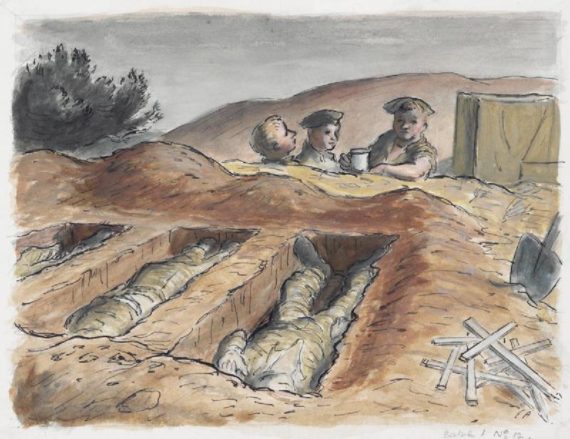 It’s easy to consider Ardizzone to be just an illustrator. That’s how he is best known, after he illustrated and designed covers for hundreds of books, including The Otterbury Incident and Stig of the Dump. He produced posters and editions for commercial clients like Shell and Guinness. He created murals printed onto melamine for P&O’s SS Canberra. He designed work for the New Chelsea Porcelain Co.

But even in his most commercial illustrations, his work is incredibly well observed, drawn simply but always capturing the life and vitality of what he’s seeing. Ardizzone’s work always looks loose and sketchy. But that masks the cleverness of his technique. His careful use of shading, and the occasional looseness of line, adds depth. He never tries to draw a face in detail, but his people are always alive.

An exhibition of his work at House of Illustration in King’s Cross puts this commercial work alongside large watercolours and his work as a war artist. It adds depth, emotion, a dark side, to the more well-known work. A stand-out work, a burial party pausing for a tea break, is one of over 400 war works Ardizzone produced. He was a frontline artist, on invasion ships; but also recording London’s war. He was arrested by the Home Guard for sketching in the bomb-damaged East End.

There’s more to Ardizzone than modern audiences are aware, and the themes in his work – war, national identity, sex – are still relevant today. It’s time you dusted off your children’s books by him, added his war work to your Pinterest board, and looked again at Ardizzone – an artist whose simplicity of technique obscures the power of his work.

To celebrate the last week of the exhibition at House of Illustration, co-curator Alan Powers gives his insight into Edward Ardizzone’s theories of illustration on 17 Jan 2017, from 7-9pm. The galleries will be open late and Alan will be signing copies of his book, Edward Ardizzone: Artist and Illustrator, in the shop.