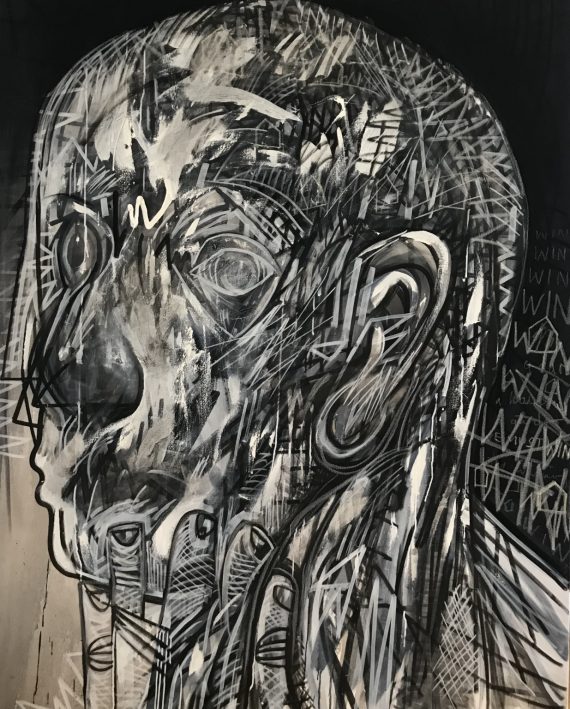 These are troubled times.  Perhaps they always have been, each era bringing its own difficulties.  The longer we go on, the more history builds and its weight becomes increasingly harder to bear.  2020 seems to be a whole new level of hell on earth, arguably epitomised by Dan Llywelyn Hall’s portrait of Nigel Farage being unveiled by Jim Davidson. Now there is an image to contemplate.

In ‘Empire Hangover’, Dan Cimmermann presents us with, amongst other things, a timely reminder of an uncomfortable aspect of British history. Portraits from our colonising past have little to do with an artist’s ability to accurately execute resemblance.  They are symbols of power and control, not only of ruling other people’s waves, but also of an elite class that sets society’s political agenda, to which the vast majority can only stand and watch, utterly disenfranchised.

Cimmermann begins the exhibition with eight large paintings which have portraiture as their starting point, four colour, four black and white.  The dark green of the gallery wall gives them an immediate Farrow & Ball gravitas, as though we are in a museum and the extra reverence that demands.  Each painting in this series has taken on elements that are folded into the narrative.  These paintings have a sense of history at their core, and the surface lays bare their own particular history of several alterations, partial removal, and additions.  The four colour paintings are a dizzying assault of painterly techniques, motifs and references.  ‘Strong and Stable’ is full to bursting with information.  It is a spectacularly visceral overload – Rococo and then some.  Only the left eye, an ear-ring and pearl necklace are clearly left from what we assume was the painting’s first iteration before all the miniature tagging, doodling and dashes of paint.  A guess that it was of a Countess may not be too wide of the mark.  Enough cleverly-positioned clues remain to intrigue us – the elaborate and elegant wig of the day is subsumed by tiny cartoon faces and abstract dabs of colour.  The right eye has been replaced by a goggle-eye and the pair of sweet cherry lips is straight out of Looney Tunes.  On the one hand it is irreverent, dark in its defacement on the other. Its neighbour, ‘Yorkshire Tea’, is less frenzied with more of a Pop Art sensibility in its composition and execution, with a nod to hard-edged contemporary design, whilst retaining a barely-suppressed anger in some of its mark-making.  Cimmermann has allowed more of his original portrait to survive, although it looks to have survived an attempt to be rubbed out.  The whole painting is reminiscent of a Larry Rivers, with flatter areas for the viewer’s eye to rest.  Of the large black and white portraits. ‘Western’ and ‘Nail-biter’ are fascinating to compare, and shed bright light onto Cimmermann’s whole process.  ‘Western’ is the quieter of the two and contains deft modelling of the facial features of what we might presume to be a young nobleman or naval captain.  Thin lines of a twisted perspective are drawn over the top and sgraffito disrupts the surface revealing earlier layers of oil paint and reasserting the picture plane.  ‘Nail-biter’, by contrast, depicts a manic character with a technique befitting the agitated mental state of its subject.  The profile shifts like flickering Futurism, supported by a stylised, nervous hand; one eye stares, the other is barely there.  Zig-zagging brushmarks suggest and obliterate form, and the tension in the painting is palpable. Cimmermann’s surfaces are well worth the effort of forensic scrutiny.  They draw you in and return something quite profound.

The second section of the exhibition features over twenty small ink drawings of heads set against a line-drawing mural of a tropical lagoon. All the heads face left and are drawn with great intensity, half extended doodle, half exploratory exercise in Analytical Cubism, and the whole piece is, at once, part installation, part collection.  So little is certain here; just when you think you’ve got it pinned down…

A huge, loosely-painted skull covers the next wall of the gallery.  A portrait of sorts, there is no attempt by the artist to disrupt or distort the image on this occasion, leaving a stark statement on mortality – when the chess game is over, the king and the pawn go back in the same box.

The last section of this highly impressive and thought provoking show is a series of smaller portraits, hung on a wall painted in a rich, red earth, the colour of Fine Art.  Sketchier and fragmented in appearance.  Enough signs are apparent to imply the subjects’ standing in society. Some are in profile, like the Queen on a postage stamp, their identity redacted by scrapes of thick paint.  In others, paint almost completely takes over and the iconoclasm is a whisker away from abstraction.

To draw direct meaning from this exhibition is to possibly miss its point.  The content is the multiple points of difference – the Posca Pen, the street artist’s weapon of choice sits alongside sumptuous swathes of oil paint – scattergun, eclectic, nothing being fixed, everything being open for discussion and interpretation – reflecting what it is to live, and be aware, right now, to submit to a barrage of signifiers and stimuli from every conceivable angle.

Sidney & Matilda Gallery is open Friday and Saturday from 10am – 5pm, and ‘Empire Hangover’ runs until 29th February