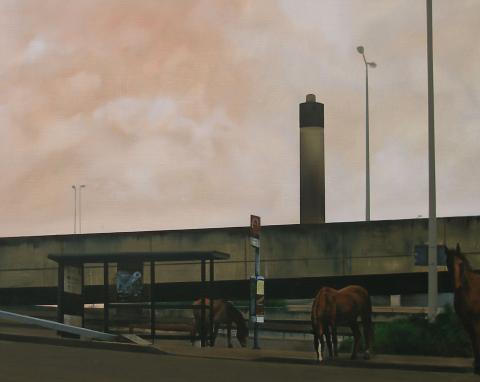 Epoch presents a body of Campbell’s recent paintings depicting mundane suburban environments. Continuing his tendency to represent vacant, lonely scenes we see houses, like those that we live in, and cars, like those that we drive, but no human figures are visible. Where these paintings depart from Campbell’s previous works is in their inclusion of animals. A deer blocks the entrance to a Portakabin, some pigs graze next to a building site. The animals imbue the work with what Campbell calls “ambiguous storytelling”. Why is there a stag in the middle of a suburban street, or horses next to an overpass? The answer, should you so choose, may be that the paintings are of animals taking over the streets at dusk. Or, as suggested by titles such as 'Before The Deluge' and 'The Last Bastion,' the apocalypse is nigh and the humans are in hiding or already dead.

Yet the appeal of these images is not in their apocalyptic overtones. Contrary to being “darkly disturbing,” as Campbell suggests, they are actually rather reassuring, presenting a familiar contemporary suburbia. The animals, often staring out directly at the viewer, do not unsettle (as might a real life animal in your back garden) but provide an anthropomorphic presence. The stoic figure of a bull in front of a graffiti covered shelter, in 'Turf War', suggests the human ability to get on with life even in adverse circumstances. As fantastical elements the animals evoke human imagination, making me reflect on how our interior lives affect our experience of the external world. Depicted individually, or in groups of two and three, the animals represent the solitariness of the human individual, particularly in cities today, and our tendency to group together to make life meaningful. Notice the images of houses (family units) and churches (another congregation). These are images that comfort and soothe, not challenging us with anything new but reflecting back what we already know.

As paintings the works are compositionally strong. But look closer at the details, especially the animals, and they appear unfinished, under-painted. At times the scale or perspective is slightly off. Campbell is apparently trying to move away from his categorisation as a photo-realist and his interest in paint as paint is evidenced in works such as 'Warm Grey' (the title referring to the paint it is rendered with). But the images do not stake out a clear enough identity beyond the photo-realist genre, making it hard not to measure them for their ability to render reality. Several smaller works signal a new direction and the upper gallery shows a collection of works that Campbell considers “sketches”. It would be interesting to see these more experimental pieces, incorporating globs, splashes, dots and drips, worked up into larger paintings.

Amelia Crouch is an artist based in Leeds.