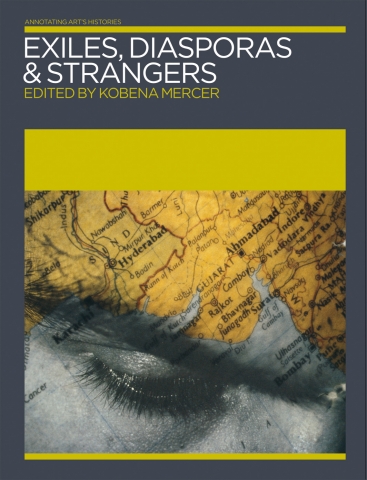 Over the past 15-20 years, there has been a growing legacy of texts and art exhibitions that have addressed issues of exile, displacement and migration, especially in relation to issues of globalisation. However, Exiles, Diasporas & Strangers, edited by Kobena Mercer and jointly published this year by inIVA and The MIT Press, forges a slightly different path. It frames ‘a thematic overview of the critical and creative role of estrangement and displacement in the story of twentieth century art.’ Beyond migration and displacement as contemporary phenomena, it embraces an historical perspective and, in so doing, makes a convincing argument for understanding these circumstances as of central importance in the story of ‘modernism’. This is possible if we accept migration, exile and displacement as experiences inextricable from the political and social changes that generated a wider world ‘modernity’ in the twentieth century, a modernity that extended well beyond Europe and North America.

This title is one of the Annotating Art’s Histories series, also edited by Kobena Mercer, which comprises three other volumes: Pop Art and Vernacular Cultures, Discrepant Abstraction and Cosmopolitan Modernisms. The series maintains the critical momentum generated within the field of art history over the past 20 years, in particular, in regard to post-colonialism and probing questions of cultural difference in the visual arts. It refuses to accept the current terrain of theoretical assumptions and methodologies for interpreting not only the artworks of artists from culturally diverse backgrounds, but also the critical interfaces that provided a crucial context for the emergence of works. It is not so much the terms ‘Pop’, ‘Abstraction’ or ‘Modernism’ that are being critiqued, but the parameters of artistic and intellectual discourses that have defined these movements as Eurocentric.

Taking a global perspective, Exiles, Diasporas & Strangers addresses a selection of specific artists and artworks framed in the context of diasporic encounters and states of exile or displacement during the course of the twentieth century. There is a general chronological sequence, but it is countered significantly by the historical breadth of enquiry in each chapter. The non-linear structure of the text is emphasised by the diversity of artists and global contexts addressed, and the way in which each chapter or story builds a multi-faceted dialogical understanding of the main themes.

The last chapter clarifies a pivotal connection between exile, diaspora, migration and modernism. In ‘Diaspora, Trauma and the Poetics of Remembrance’, Jean Fisher cites Walter Benjamin who ‘identified the traumatic nature of modernity with trauma’s dissociation of memory from consciousness.’ Fisher relates this trauma to the ‘radical rupture’ of ‘involuntary migration and slavery – in the psychic, economic and socio-political consequences of cultural dispossession, geographic dislocation and political disempowerment’ For anyone who has experienced migration, displacement or exile, or is descended from such a history, Stuart Hall’s comment, also referred to in this chapter, comes as a belated moment of recognition: ‘now that, in the postmodern age, you all feel so dispersed, I become centred. What I’ve thought of as dispersed and fragmented comes, paradoxically, to be the representative modern experience!’

The book poses challenges to a number of cultural and historical myths. One is the persistent notion of modernism as a primarily Eurocentric artistic phenomenon that was disseminated in an outward radial direction to the rest, mostly non-western regions, of the world. Ikem Stanley Okoye disputes this in ‘Unmapped Trajectories: Early Sculpture and Architecture of a ‘Nigerian’ Modernity’. In proclaiming the multi-directional flow of ideas and identities, Okoye discusses the work of architect, James Onwudinjo, born in the lower Niger delta region at the end of the 19th century. In the Adinembo House in Okrika, commissioned from Onwudinjo by a wealthy Izhon produce trader in the early years of the twentieth century, the author identifies the formal and conceptual innovation, as well as rhetorical engagement with technology, that informed its design and construction. He argues for the resulting structure as evidence of a Nigerian modernism that does not owe an allegiance to the mimicry of European ideas, with its radical departures from both traditional Okrika and colonial architecture.

Maintaining a critical perspective on notions of ‘centre’ and ‘periphery’, there are also challenges to previously accepted narratives of encounter and cross-cultural appropriation between indigenous and immigrant artists in settler societies, such as those in Australia and North America. In the second chapter, ‘Turn of the Primitive: Modernism, the Stranger and the Indigenous Artist’, Ruth B. Phillips identifies a triangular pattern of encounter in the story of Native North American Modernism. ‘A dynamic association between the de-territorialised western artist, the colonised and dispossessed native artist and the modernist European ideology of artistic primitivism’. One specific example of encounter Phillips investigates is that of Joseph Weinstein, a diasporic Jew who pursued careers in both medicine and art during his life, and the Anishinaabe painter, Norval Morrisseau, in Northern Ontario during the 1950s and 1960s. Instead of a binary oppositional relationship, Phillips sees the process of encounter in dialogical terms, perceiving both the indigenous artist and immigrant (stranger) artist as ‘de-territorialised, although in different ways, the stranger as immigrant or exile and the native through colonial histories of displacement.’ Further, ‘the relationships between indigenous and stranger artists could become strategic alliances, made possible by coincident, rather than identical activities and goals.’ Morrisseau is repositioned, through a study of his paintings and dialogue with the Weinsteins, as astute, selectively procuring advice and appropriating the language of modernist primitivism in order to further his goals of exploring and preserving Anishinaabe concepts and practices.

Ian McLean, in ‘Aboriginal Modernism in Central Australia’, takes issue with previous historical perspectives that have denied Aboriginal artists a place in the story of modernism by also stressing a dialogism in the story of encounter. Rather than emphasising facile similarities between contemporary Aboriginal painting and western abstraction, McLean calls for a narrative of Aboriginal Modernism that begins with the construction of the Overland Telegraph Line across the interior of the continent in 1869-1872. By acknowledging the active agency of the Aborigines in cross-cultural interaction throughout the 20th century, he reinstates the visibility and determining role of indigenous artists in developing a path to indigenous modernism. Thus, the emergence of the Papunya art movement in the 1970s, and the resonant paintings of Central Australian artist, Emily Kngwarrey, are given an important lineage, and related to the influence of modernity in the artists’ lives. McLean suggests ‘the fear that applying theories of the modern to remote Aboriginal art will assimilate its differences into Eurocentric concerns is paternalistic and ignores the ways in which Aborigines have, since the time of first contact, readily sought to translate, assimilate and use the cultural products of modernity.’ He acknowledges ‘Modernity’s apocalyptic effects on all traditional societies, including Aboriginal ones, are undeniable. However, such argument easily slips into a binary logic that flattens the ambiguities of the colonial encounter and silences the historical adaptations of the colonised; thus colonising them all over again.’

Half a world away, Amna Malik reconsiders exilic and diasporic encounters in Britain in her chapter, ‘Conceptualising ‘Black’ British Art through the Lens of Exile.’ Malik examines Gavin Jantjes’ A South African Colouring Book (1974-1975), Mona Hatoum’s performance works of the 1980s and Mitra Tabrizian’s The Blues (1986). She focuses on the connection between the trauma of displacement and exile, as experienced by these artists, and their influential engagement with post-colonial and post-modern critiques of western culture and nationalist myths. Further, how the exilic vision of an artist such as Mona Hatoum, who arrived in Europe following political upheaval in the Middle East, resonated with assertive creative strategies in the face of racism, even apartheid, by ‘black’ British artists in the 1980s. For Malik, the power of the exilic vision accords with Edward Said’s notion of the ‘contrapuntal’. ‘Seeing ‘the entire world as a foreign land’ makes possible originality of vision. Most people are principally aware of one culture, one setting, one home; exiles are aware of at least two…’ In fact, the creative possibilities arising from an awareness of multiple perspectives can, according to Said, ‘make concurrent those views and experiences that are ideologically and culturally closed to each other.’

The interpretative strategies employed throughout this book place an emphasis on understanding the work of artists from culturally diverse backgrounds in the context of complex, multi-faceted and multi-directional interfaces across cultures and histories. There is a sense of the reality of the two way process that occurs when different histories and cultures intersect and irrevocably influence each other. It suggests cross-cultural interactions in our world are too complex to be articulated through the simplistic, binary, even formulaic, window of ‘self’ and ‘other’, or ‘western’ and ‘other.’ The original contribution of this book to current scholarship also includes its redressing of the ‘ahistoricism’ of previous art theoretical discourses on diaspora, migration and displacement in the visual arts. There are many other books and publications that address these phenomena in contemporary societies, and also discuss questions of migration and displacement in terms of cultural studies and art theory. Some also question ideas of modernism. However, Exiles, Diasporas & Strangers takes a further step by rigorously studying specific artists and artworks over the course of a century, thereby proposing a new historical understanding of modernism. At the same time, indelibly grounding the profound long term influence that exile, migration and displacement has had on generations of artists globally.

Exiles, Diasporas & Strangers substantially and eloquently addresses questions of historical importance to our apprehension of cross-cultural perspectives in the visual arts, thereby advancing a significant area of knowledge. It is both scholarly and accessible, and recommended to anyone interested in post-colonial and global perspectives on art and modernism, or who questions the way in which the modernist art movement has been represented. Without a doubt, it should be on the reading lists of educational courses that seriously engage with advanced thinking on art history and modernism, in a global context, today.