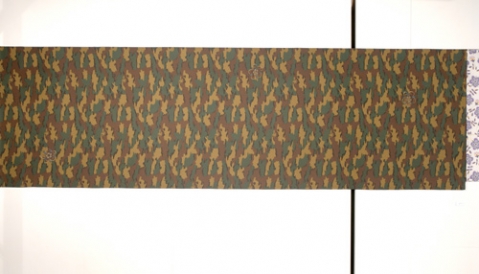 Give sympathy for the 7” vinyl record: two recordings bound by alienated separation; bound together by a conjoined synthetic whole. A Side is the main attraction, glistening with pop pulling power, B side a sonic shadow, a slighter song waiting for airplay, waiting for the needle to touch, to stimulate its resonance. The vinyl recording is a metaphor for duality and the interchangeable, inhabits its own vocabulary of hierarchies, is its own mechanism imbued with codes of manufacturing, modernity, consumerism and the moment. It is a continuous sonic cloth, labouring under the scrutiny of a virulent yet passive needle.

This text hopes to conjoin in a similar way two different yet totally analogous exhibitions recently or currently on view at the Albert Dock in Liverpool, England. Fabric of Protest at Site and in particular the work Terra by Liverpool-based visual artist Nina Edge, and the Turner Prize 2007 featuring Mark Wallinger, Nathan Coley, Mike Nelson and Zarina Bhimji, which in celebration of Liverpool’s Capital of Culture 2008 has been installed at the city’s Tate Gallery, its first presentation outside of London in its 24-year history.

Fabric of Protest, curated by John Byrne, and Paul Domela of JMU and Liverpool Biennial articulates a kind of ‘menace’ of textiles, the burgeoning meaning of surface, decoration, material and dress whether political, religious or domestic. It assembles a group of artists interested in the concoction of controversies, implications and separations that surround the vocabulary of worn and adorn. It allegorizes the unstable behaviour, the compelling, immediate appearance and blizzard of denotations implied by the symbolism of dress, the facade of cloth.
Central to the projects is Terra by Nina Edge, an installation of an array of work that looks at the industrial, emotional and gendered history of fabrics and its more present tense manifestations. Using a workshop mentality it presents and merges print with punishment, mannequin with mistrust, embroidery with extremism. Vogue with violence. Edge affixes, through an examination of fabric, war with poise, fashion with explosiveness, the domestic with misrepresentation which saturates her work with a vigilant sense of disquiet. In particular she explores the iconographies of work, toil, power and hostilities embodied by camouflage, uniforms and boiler suits. Her exploration of work clothes and uniforms parallels Ann Hamilton’s indigo blue (1991/2007), a statement on the building of a nation’s identity; while the appearance of camouflaged wedding dresses and the Hijab and repeat patterns borrow a theatrical and psychologically isolating sensibility from Robert Gober’s Untitled 1992 (the drag wedding dress installations).

Within Terra is a synchronisation of the potent symbolism of Guantanamo Bay orange boiler suits with the motifs of disappearance and the fetishism of the armed forces and in particular the inconsistencies and aggravations between individuality, collective, unity and patriotism. This collage of conflicts is interwoven with statements on the erosion of the concepts of Law and the radicalisation of the unfamiliar. These clearly worthy pursuits are assembled with a number of incisive and amusing allusions to Minimalism and Pop Art seen in her black on black drapes, her broad canvasses reminiscent of Warhol multiples or Fabio Rieti’s decorated, camouflaged buildings, dressed in disruptive patterns.

Turner Prize 2007 shares not only geographic proximity but also the threads of multi-layered scrutiny, intensive research, articulated rigour and a similar set of concerns surrounding social and political realities, economies of war, internationalism, power and contemporary anxieties . However these threads are traces as this is a purified, distilled presentation. It occupies a number of difficult to negotiate rooms at Tate Liverpool and summarizing a year of the selected artists practice, highlighting significant pieces, shows and installations defining them not only as artists now but also in these art hostilities as contenders/combatants. The exhibition is airless, interpreted and curated to the point of prohibition. Its sober atmosphere leaves little to engage with other than the lean selection on view; the audience and its intrigue are negligible, the prize is everything.

Mike Nelson’s AMNESIAC SHRINE or The Misplacement (a futurological fable): mirrored cubes – inverted – with the reflection of an inner psyche as represented by a metaphorical landscape 2007 kicks things off. It is the supposed output of a non-existent biker gang made up of Gulf War Veterans, allowing this fictitious unit to extend without limit the references Nelson exploits in his work, which include politics, cinema, science fiction, myth, history, music and art. Four large grey boxes are installed within a maze-like construction topped and tailed by fake campfires. Entry to Nelson’s imagined worlds is very selective, with only six or seven people allowed in at any given time. The boxes are stagnant and oppressive while the audience orientates itself, finding tiny holes torn into the fabric of the cubes; these holes give access to their innards: an illuminated, mirrored environment filled with sand and fairy lights. It’s a modern amusement, a kind of hall of mirrors, an updated take on Étant Donnés (1943) by Marcel Duchamp. A peephole installation suggesting and serving voyeurism, mystery and claustrophobia. The supposed Gulf War Veterans/Biker Gang reference is lost, or the multitude of cross-referencing that Nelson utilizes – in this installation these are only gimmicky afterthoughts that add weight to what ultimately is a terminally prosaic experience.

In Mark Wallinger’s video projection Sleeper 2004-05 the artist is filmed in an office building lobby, designed by Mies van der Rohe, wearing a giant bear costume; he paces around the empty after business hours space, occasionally interacting with the public outside, running around or disappearing for extended periods. This performance was filmed over 10 days between 10pm and 1am inside a Berlin office building and screened unedited in the Tate to a slightly pissed off adult audience and a hysterically entertained junior audience who loved seeing a cute giant bear enjoying its furry fun. Wallinger works with anomalies and contradictions of culturally-bound behaviours, traditions and contexts. The film is projected in its own specially designed modernist cube which in combination with the performance ruminates on the isolated artist, the spectatorship of the caged beast, the fabrics and forms of utopian ideals, the culture of surveillance measured against the powers and triumphs of modernism and capitalism and the boundaries between different cultures and nations. The bear is Berlin’s heraldic symbol and here Wallinger enacts its symbolic command. He also plays with appearance and disguise, fairy stories and with the bear/artist in isolation a certain amount of cruelty. This is a zoo of outsider/insider, foreigner/national and security/insecurity.

Nathan Coley continues a deliberation of national identities, social certainties, institutions of power and religion and notions of entrance and exit, authority and power, access and denial. He also presents the strongest show, one that offers different textures and a broader, more ambitious range of materials: here we see architectural models, text and light installations, minimalist sculpture and interventionist photographs. There Will Be No Miracles Here 2006 is the standout piece of the entire show; three lines of text rendered in glass light bulbs affixed to scaffolding and originally presented outdoors at Mount Stuart, Isle of Bute, Scotland. It is a declaration that references a tension between state and religion whereby the Crown dismisses the possibility of a higher power by passing a law that negates the existence of the divine or the supernatural. In Annihilated Confessions 2007 , Coley spray paints over photographs of confession boxes, censoring them, half obliterating them teasing us with ‘extracts’ of their representation, titillating us with glimpses of their magnificence and their acknowledgment of sins, guilt, dirty secrets, atonements.

Zarina Bhimji presents a suite of eight photographs and one film, the busiest offering in the show and also its most formal; and with her palette of monochromatic, sun blushed beiges and whites the most beautiful, sterile and commercial. Her film Waiting 2007 is filmed inside a factory in Uganda that processes Sisal, an organic material used to make rope. The yellow-white colouring of the substance sets the palette of the film, while its slow processing sets the pace -– measured, deliberate, serene, reserved. Here she analyses with precision and detail the processing of this fabric, the factory, its modest architecture, its few employees and the poverty of their existence, which in turn deliberates on trade between the West and Africa. These aesthetic qualities and economic reflections are continued through Bhimji’s series of photographs, which also speak of more turbulent, violent, corrupting interactions between state, religion, humans, nature and the dogged pursuit of financial interest and profit.

Fabric of Protest and Turner Prize 2007 are the flip sides of the same 7 inch single: they both display a concern with urban, economic and social processes, they deal with modernism and capitalism and their failings and degeneration, with the Shock Doctrine implied by the rise of disaster, confrontational or antagonistic agendas. However the circumstance of their presentation fastens them to distinct, incongruent, specific motivations. One, ultimately a deliberation on the dismantling of methods of protest, a consideration on the materials and means of dissent expresses a desperation over the indifference/fortification of our institutions; the other is a climate-controlled visual art wrestling match, a strategy for competition and preference, sanitising the artists intentions, pitching their research, explorations and conclusions into the realm of profit and loss. Artistically they are the same thing, contextually they are synthetic, alienated opposites, but both represent a double A side, meriting equal engagement.