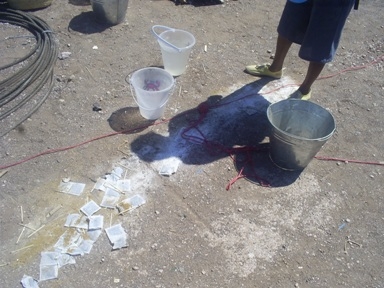 'The Storytelling that thrives for a long time in the milieu of the work – the rural, the maritime, and the urban – is itself an artisan form of communication, as it were. It does not aim to convey the pure essence of the thing, like information or a report. It sinks the thing into the life of the storyteller, in order to bring it out of him again’. (Walter Benjamin, ‘The Storyteller’. Illuminations.)

Across from a tourist information centre we are led to a point. A slab bears witness to timeless history, spanning unconceivable chronologies. A brief history of the area is given from this point. It is hot and necks burn as we traipse across the beach.

We receive the scandalous story of a dancer from a dancer, crab buckets, salt water, balloons, and life jackets as we watch cardboard ballerinas in a miniature theatre. Tales of promiscuity and tragedy, of lost lovers undergoing electric shock therapy, loss and desire, lies and truths. Under the shadow of old boots two stories plait, ravel and loop like frayed laces: a dancer who takes to the arms of a lover, a failed engineer who takes to sea. One continues oblivious to the consequences, the other falls victim to them – both entwined in fishing lines, nets and webs of deceit that litter this beach. Their denominator is this place where we stand. On the shore that looks across to the Atlantic we listen attentively to these tales, we look to maps, charts and faded photographs to decide for ourselves where the facts and fictions lie in these narratives.

The storytellers ask us to hold red ropes. We gaze at spilt salt, unused teabags and matches. Transient objects that lie in the sun amongst the rusty chains and splintered wood. Unfinished voyages and false coordinates, drunken philosophy and creaking decks, shipping forecasts and seagull shrieks accompany our journey to a site where water and granite deposit are mixed in silver buckets. Our hands are grey and greasy as we discover that this was the place from where ‘ball clay’ was exported across the empire. Notions of displacement arise as we consider this oily mass as an object of capital used in the manufacture of domestic appliances and household goods.

Our first story ends here as we stare through holes in the wall to catch a glimpse of the interior of a disused factory from where this commodity was exported. Where we expect to see abandoned machinery, we find artifacts stuffed in the holes of the walls – a small wooden ship, rolled up maps and salted fish. The storytellers stray to a secluded alley and play bowls with the moulded clay.

A village built on a steep incline somewhere between the sea and the outskirts of Dartmoor. A man in a black suit and a black hat roams up and down the street. A toy train is fastened to his back – a grim talisman to guide him through a Sisyphean punishment. This man was blessed with a gift of humanity and directed towards the highest objects, only to be dragged back down to purgatory on the turn of a card. A woman, also in black, peers at a cloudless blue sky through binoculars. It is hot and our necks burn under the glare of the sun.

The storyteller approaches us. He introduces us to a story as old as the rock on which this dusty road presides. The tale of a father, a daughter and a tiger. Myth and geography collide in this place where reality and the imagination intercede and distort. Ancient narratives are adorned by the storytellers to excite strangers to these parts and unsettle the villagers. Hybrids of the human/animal are well documented in mythology – their connections with the dark powers that threaten to invade the places in which we so carefully build our lives and devour us is explicit.

The daughter stands in a bucket filled with soil. A rare rose that is watered with considered care. Once sated she sings songs to enchant the creatures that surround this valley. The lady in black is an oracle who communicates with the birds that observe from above. A deserting wife? A distant mother whose physical presence vanished a long time ago? Her bearing is palpable amongst a tranquil scene of flowers, strawberries and bees. Behind the trees a tiger prowls and stops to doze in the sun – watching his prey from a distance. The father brandishes ancient water filters.The water here is pure and free from tiger poison. All is immaculate and we need not worry about pollution from the outside.A wound to the wrist of the daughter disturbs the father. His distress is doubled at the site of the tiger that lays down a challenge for the daughter. The father agrees to gamble his most cherished and most valuable asset. Without hesitation or caution he is ‘all in’ regarding this round of perilous poker.

We are offered vegetables and fruit – we hear the contents of a letter. Has father already lost his daughter? She is caught in the tiger’s spell. The beast quenches his thirst and drinks from her skin. The father climbs a hill. He stands on box and holds a picture frame before a white tower in the distance. His former glories embodied in stone, high and prominent amongst the green fields and hills, but no longer in his possession. The tiger and the daughter approach to instigate his final destruction. We consecrate the father’s downfall with spring water and plastic glasses followed, of course, with a queer old ditty. Animal, vegetable, mineral. Animal,vegetable…

Our storyteller wears a Panama hat and stands with a travel trolley. We gather in an archway laden with Russian Ivy. After crossing our first threshold we peer into the grounds of a mansion house. Our storyteller pauses and listens. The sounds are imperceptible. We encounter an unnamed monument – slabs of granite piled on top of each other – the narrator’s hands rub and pat the stone with water. More thresholds are crossed. Each step is a movement towards a future uncharted, achievements and follies, discoveries and failures.

Banging on a stone wall with a stick and the indication of an absence. A fellow storyteller that can’t tell his tales for he lies trapped in a big house. We stroll down a dusty path and meander through trees and brambles to a bridge. A plastic crab sits in a tree. Our storyteller removes it and it falls into the river to join its fellow crabs. Will it be accepted or ostracized owing to its man made state of reproduction? It is rescued by human hands. A singing gate again echoes the presence of a missing accomplice as we cross a bigger bridge marked with chalk. We stand on these points to observe the flow of ducks and traffic. Flows in either direction. North and South, East and West. Like starlings on electricity cables we stand on an invisible axis, trembling between coordinates as the bridge bounces and bends. Comings, goings and abandoned cycles.

Wandering around an industrial estate – a miniature zebra in our minds. A footnote to the cultivation of natural elements in order to manufacture desired objects. The lines between goods and commodities become blurred. False satisfactions from survivals that increase through emigration and immigration. Poverty is not transcended in these flows: it is merely gilded.

Economic abundance and the concentrated results of social labour become visible here in Newton Abbot. Reality is in effect a product of this labour as we find ourselves surrounded by its inventions. Motorways, CCTV and Pylons follow and mark the edges of these urban borders. The trees and rivers bear witness to the length and breadth of this land that has became a faithful portrait of commodification. Objects encountered on these peripheries recite their own stories. Speeches that need only occasional prompting as African music accompanies a human monologue.

Passing the greasy spoons and paint factories. Animal, vegetable, mineral – repetitive and circular transformations of matter. We stop at the foot of a toxic river. We launch a boat inscribed with a poem. The verses are read as we ponder the importation of snow to satisfy the eccentric desires of colonists far away in Africa. The storyteller hands out postcards. We are encouraged to correspond with the ghosts of displacement. We straggle through the industrial estate – past the power station and the dangers of death. We listen to the story of a sculpture bought in Zimbabwe. It seems this object was displaced in the home of the narrator, no matter where he positioned it. The music of our missing storyteller fills the air, its source revealed as a device in the travel trolley.

We return to the monolith, still stained and damp with the narrator’s palms and water. The square lawn is august yellow. The misplaced Zimbabwean sculpture is removed from the travel trolley. The woodcarving depicts two fellow travellers sharing a common burden. Sandwiched and finally resting between granite slabs. A missing jigsaw piece. A solution to a riddle. The end of a mystery.

Multiplicities and synchronicities are tied together in an isolated moment of infinities.

These narratives and events are evidence to the emergence of a site specific arts practice and the integral role it plays in relation to local culture, identity and history. The combination of dancers, performers, visual artists and storytellers parallel to a conceptual framework that includes notions of the psychogeographic and the mythographic reveals a methodology and a process that thrives when located in a public context.

Form, content, performers, audience and site are fused together and each element feeds and re-configures itself in relation to a multitude of possibilities and risks that are fundamental to return of the storyteller and the socio-cultural integrity of his/her living immediacy. This paradigm of phenomenological and experiential artwork complicates the site of its own production not only as a tangible and physical arena, but also as a location that is constituted through social, economic and political processes.

The walks are indeed fabulous.