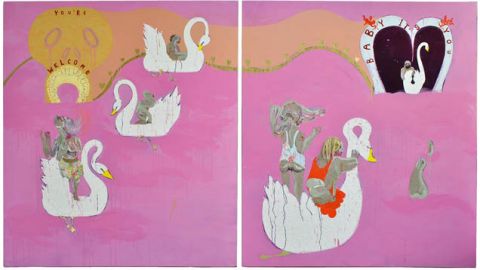 Face to Face at Transition Gallery has a soundtrack, the hypnotic circus music of Kate Lyddon’s whirling sculpture ‘The Amazing Wall of Death’. By casting a faint pink glow her ‘Tunnel of Love’ diptych has temporarily altered the very atmosphere of the space. Her fairground colour picks out the girly purples and blues of Manon Bara’s tattooed men on the wall opposite, and the words and pictures inscribed on their bodies echo back to meet the names and lyrics hidden in Lyddon’s fairground rides. In fact all of the works in the exhibition from Gallery d’Ys in Belgium seem to be interconnected, sharing themes and messages back and forth.

Put together to redefine ideas about portraiture the Face to Face artists build layer upon layer of references, imaginings and stories into their work. The accompanying essay by Alex Michon describes them as ‘17th Century pirates, they plunder their iconographic booty of representational imagery, picking out any particular diamonds that catch their eye’. Manon Bara’s painting of tattooed men are the end result of a process which exposes a desire to know her subjects and to mix their identities with her own, embellishing their own tattoos with her version of their life stories and then making a portrait of the end result. The canvases of Bruno Hellenbosch reference all corners of the imagination from fairytale animals, pixelated graphics and flouro paint patterns, building a dark world around their central subject.

Both using mythical igonography Yasemin Senel and Annabell Guetatra create intricate drawings. Yasemin Senel’s magical creatures on paper are made up of different body parts from pagan rams to painted ladies and lovehearts to hidden Madonna’s. The crowded mixed-up drawings and midnight pastel colours give the impression of a raucous, heathen celebration. In contrast the negative space around Guetatra’s delicate drawings exude a desolate and dreamy atmosphere, helped along by the dark sexuality of the scenes.

The darker side of love is explored by Lyddon as her fun seekers drift through the tunnel of love to find what waits at the other end, two are locked in passion and one disgruntled character seems to have lost his partner. Partially obscured lyrics, wallpaper swan boats and swimming costumes and synthetic hair are mixed together on the canvas to weave a theatrical story, and the setting of the fairground brings to mind retro Hollywood portrayals of love, and warns of predictable sad times ahead.

The constant mixing of darkness and light of all kinds makes all the work in this show seem so complex and personal, drawing the viewer into the worlds not just of the subject but of the artists too, making this ‘everything is possible’ style of portraiture really quite moving.