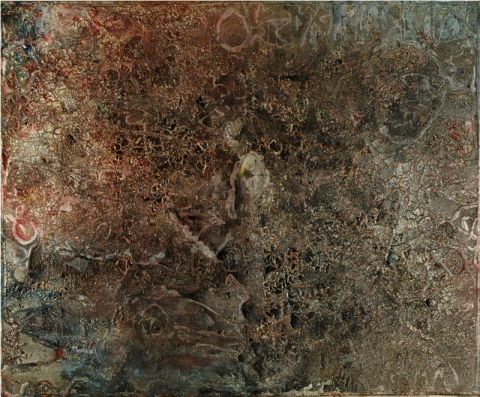 Derek Hill’s paintings appear to emerge from some kind of physical process. Some of his work has been compared to vast geographical processes. They could be interpreted as having the appearance of a satellite image of earth or a view of the moon. The mind is tricked into seeing traces of river systems, landscape contours or the pitted surface of a lunar landscape.

Other canvases have a metallic quality, with the textural appearance of a surface formed by physical hammering or other physical manipulation. And yet, Hill’s works are formed by the chemical reactions of the mixtures of oil paints, industrial paints and solvents which he applies to his work. The artist is the catalyst which sets these paintings alive, growing and evolving them meticulously over many months.

The experience of these paintings, like the works themselves, is very intense and rich. The paintings have different qualities depending on the distance from which they are viewed. ‘Zooming-in’ for a very close look is a very satisfying experience. The textures formed by the reactions of paint are intriguing and close examination reveals many layers. Colours and textures shrink and ripple to varying degrees of intensity. One almost expects to see the surfaces scuttling about, receding and advancing like a time-delayed photography film.

‘Zooming-out’ and standing back from these works would be as satisfying but for the presence of Untitled 13. This one canvas stands out uncomfortably from the rest of the exhibition, dominated by an unattractive quality of line and disagreeable colours. To me, it is as unpleasing as the others are exciting, and unfortunately a study of this canvas, as I wonder why this one is so different, fixes the lines of this piece in my mind. As I then stand back from the other Flaw pieces, I see similar thick lines underlying the textures and shapes in many of the other canvases. This becomes distracting until I manage to filter this out again.

On the other hand, it would be difficult to single out a piece from the remainder. Each has a powerful presence and, if I can forget Untitled 13, the stronger lines do give the pieces dimension and structure at a distance and prevent them blurring into homogenous texture alone.

A subset of three paintings appears in the adjacent Small Gallery. These have been built up over lace net and flocked wallpaper. They have a darker, grungier fell as the alchemical process of production has simultaneously created and destroyed surfaces. This generates a tension in these works that adds depth to an ultimately successful exhibition.