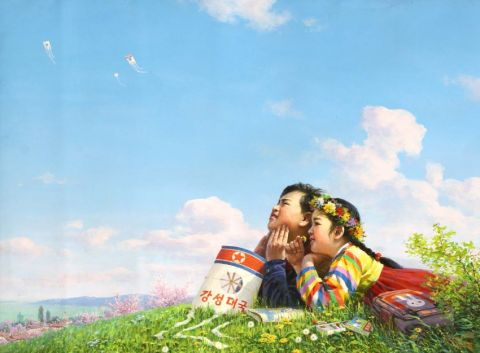 What follows is a cross between review, rant and note taking:

Laughter is infectious apparently, and smiling too. It is difficult to tell whether visitors to this exhibition of North Korean art were smiling with or at what was presented. Almost every character portrayed in the mesmerising display of paintings and prints is grinning too, outwards or upwards, from within their respective, mostly large scale, rectangles. The impact is curiously uplifting, then you feel sick. These are only pictures after all and ought not to be trusted any more than we believe the eerie upbeat expressions strapped onto the faces of our Western Prozac users.

On that point, and digressing slightly, it would be easy to marvel at all this rarely seen contemporary Socialist Realism as a terrible exercise in propaganda but are other societies any less peculiar? Outside the MAK which hosted the show stood a billboard framing the huge face of a smiling election candidate next to related slogans. Are not games worlds like Grand Theft Auto, the common uses of computer graphics and photographic manipulation, as media writer Lev Manovich suggests (initially in his essay The Paradoxes of Digital Photography, 1995) ominous too, effectively shaping our minds or making a wretched world seem exciting. Thirdly, isn’t the mass of deliberately meaningless corporate art, and purportedly conceptual art too by the way, so opposite to the dictates of Juche, too convenient for what is called capitalism? No wonder for instance Michael Kimmelman instructs us that Matthew Barney is ‘the most important American artist of his generation”‘ (New York Times Magazine, 1999). At street level maybe graffiti is a crude equivalent of North Korean Realism, once intense, both consciously didactic and witty, now endorsed by governments and councils and, if containing any message at all, it is one that glamorises gangsterism in the way movies often do. And this is not even to begin considering the holiday snap, the family album, wedding photography and other traditions which often, but not always, amount to misinformation, idealisation of the nuclear family idea and so on. The history and uses of religious art deserve a mention too…

Rough notes in no particular order:

+ For example not all characters smiling

+ The torn traditional blouse and bloodied shoulder of female portrait

+ The People of Kosong Assisting Soldiers at the Front

+ Priorities to a Remarkable Increase in Coal Production

+ Establish a Reading and Studying Atmosphere Throughout the Whole Society

+ From September to October are the People’s Health Tests. Let us all Pass the Tests.

+ All for Following the Law and Improving Quality in Construction.

+ The Forest is one of our Important Resources. Prevent Forest Fires and Protect Forests.

+ Above may be translated poorly.

+ and involve text with image

– Many social scenes depicted, often with characters at work.

– A wall listing Juche groups around the world

– Reverence for the leader(s)

– Individual artists associated with most pieces

– Some of the artists:

– How happy are the people here by comparison with the West?