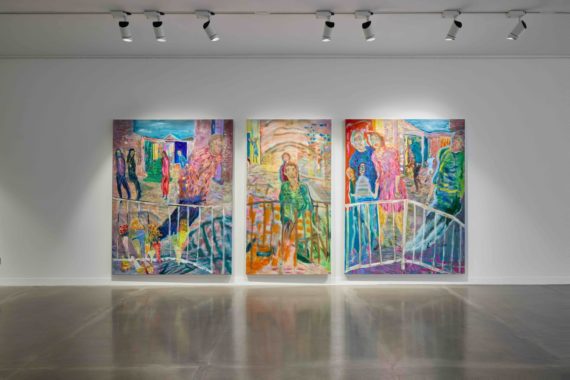 Andrew Litten admits, ruefully, that he’s a painter’s painter. “Most of the people who like my work are artists, and that’s the last thing you want”, he says. “Sometimes appreciating art is down to the ability to read it, and sometimes it takes a while to get into something. You have to find the connection”.

Litten’s expressionist paintings challenge for engagement. Complex, varied and layered they reach into the human condition and draw out the viscera of mind states: depression, sex, dependency, anger, fear, all our most private corners are opened. The pictures are exciting and calming at the same time, because they seek to reveal the mind, not really the artist’s but somehow the looker’s, and explain. 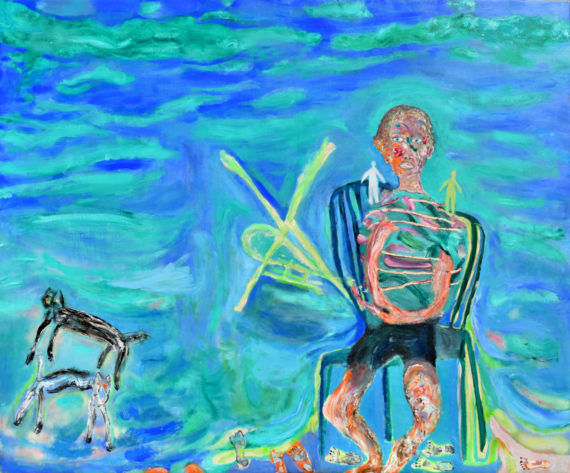 At first look, the images seem to be surreal, but they are not: the figures aren’t themselves distorted, but different elements are included to give a multi-dimensional narrative, a narrative you the looker give. He uses colour to match the emotion of the scene. He takes his ideas shamelessly from everywhere, including other works of art, online images, friends and domestic objects, even the stack of 500 or more paintings going back to his teenage years and stored in his attic.

Even though his work has been exhibited all over the world including at Tate Modern, Litten’s first London solo exhibition at the JD Malat Gallery in Mayfair, Fragile Together, is the emergence of an artist whose career has been stood steadfastly on the periphery, resisting convention and defiant against accepted rules of practice, with fiercely impasto brush strikes and almost violent colour choices. The word uncompromising arises all the time.

This new group of paintings and sculpture emerges from a period of tragedy and deprivation that could have had the opposite effect to the warmth and positivity that comes across here. 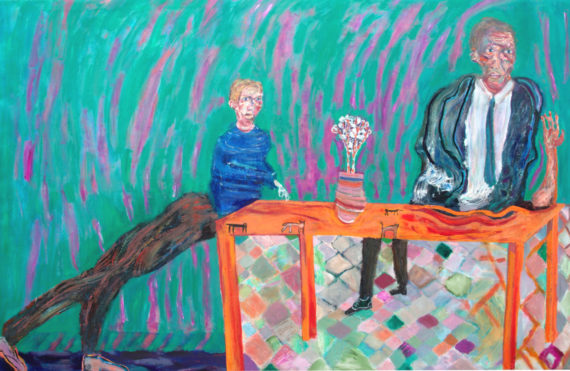 Born in Aylesbury 50 years ago Andrew Litten has always been able to draw, and from the age of about 12 could draw a portrait from memory. He went to art school in Amersham but dropped out, repelled by the competitiveness and the restrictive atmosphere. He pursued his own inspirations for his figurative work, sometimes in rock songs, always relating to everyday life, sometimes bizarrely reflected, often with humour. Sometimes he would invest the canvases with bits of found material to add a hint of a new facet to a painting’s narrative.

At college, a waymark moment in his life came when he met Emma Neame, a writer and art historian, and they married, and two children came quickly. Living by then near Oxford his art took second place to supporting her and their children, and he worked as a photographer’s assistant, touching up the blemishes on black and white images.

Another waymark came when a friend who happened to be the gardener for the pop artist Richard Hamilton who got him an introduction to Hamilton’s studio. “It was an amazing, extraordinary thing to see the ambition and the seriousness of the work and how he went about it, and I suddenly thought ‘I need to particularise’. It just made me want to take things seriously”.

So in 2001 he and his family left London for Cornwall, for Fowey, where he found a large and welcoming community of artists, and a host of encouraging galleries. He flourished, showing at the Royal Cornwall Museum and Falmouth Art Gallery, being elected to the Newlyn Society of Artists and joining the Contemporary British Painting group.

By 2007 he was on a roll, but had had “a run of bad experiences” with the London art market. “It’s really frustrating because you can’t do anything unless you have a dealer that makes the press calls”, he says. “I mean, it’s a complete myth that artists just get discovered”. He made Dog Breeder, “a really angry painting”, with paint and pubic hair, in which a sexualised dog-human is fed from by four pups on heat, an uncomplicated parable of a twisted art market and its commerce-orientated hierarchies. It was shown at London’s Vyner Street during Frieze week where it passed unremarked, and then in Cornwall where a critic described it as “sick and depraved”.

Back in Fowey, however, his work was becoming established, with a 2018 solo show at the Anima Mundi Gallery in St Ives and a partial retrospective at the Royal Cornwall Museum in Truro. In 2020 he took part in a group show at the Malat Gallery supporting artists affected by the Covid lockdown, selected by a panel of artists, curators and dealers. And Litten’s work, says the gallery’s owner Jean-David Malat, was the stand-out success prompting to him to offer him his first London solo exhibition.

But worse than the pandemic was the sudden and shattering loss of Emma in 2019. It was, he says, completely life-changing. The lockdown followed before his grief could take shape, but it gave him the means to cope: “I just worked” he says simply. “Hard. It gave me a new intensity, and it’s given the work a new gentleness as well. I want more warmth than I did, more compassion”.

All the works in the exhibition were made in 2020 and 2021, though several had their genesis years before. His triptych Regenerate is three images with street barriers in the foreground, progressing from a roadside shrine of bunches of flowers to a young man, the central character, declaring his eagerness for the future, to a family gathered, still behind the barrier but all with the background of familiar town centre architecture.

Regenerate began ten years ago and has gradually grown and changed over the years – all his paintings are constantly being modified with additions, subtractions, colour changes and characters’ physical attitudes changed. Clouds began as a boy on a chair thinking, which grew with the addition of a toy helicopter, a toy but also a means of escape with the character yearning to leave behind the childhood signified by the two tiny figures on his shoulders. The title of Drugs Combination3 seems to indicate a dark subject, but actually, it is a portrayal of tranquillity, a peacefulness induced by anti-depression medication with a female figure dressed in red plush sinking formlessly into the red plush of comfortable wing-backed chair. Ventriloquist shows two women – or are they? – fighting, each one’s fingers lining up with the other’s mouth; the scene is behind a table beneath which two naked pairs of legs stand, slightly refracted from the figures above, suggesting another narrative – the pattern on the table was the first component of the composition – and the composition is reminiscent of van Eyck’s Arnolfini Portrait. Existing Together is an unequivocally tender portrayal of a couple whose forms are melded into one. The Giacometti-esque bronze sculptures are fond portrayals of affection. 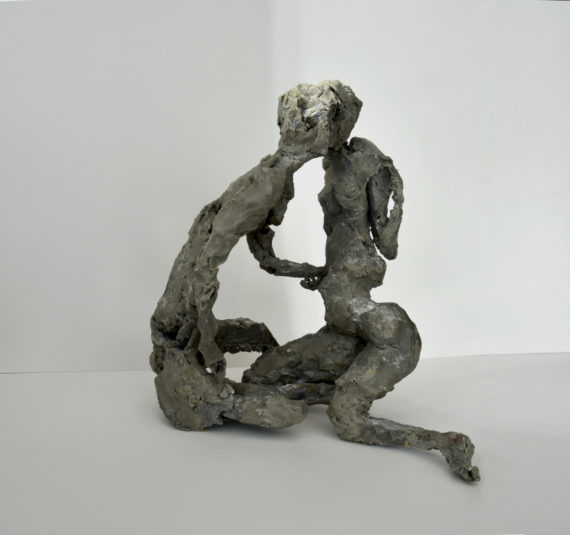 Malat gave Litten carte blanche, even to choosing the exhibition title: Fragile Together. “It was quite a lockdown thing, that we were all in it. Vulnerable”, he says. He has always painted alone, no-one is allowed in his studio while he is working, no-one sees a painting or sculpture until it is finished. So alone-ness is normal for him, loneliness is not a factor. Through the lockdown, however, he kept in touch with other artists via text, but discussing only the management of the situation, never art. “Empathy, I’ve found, is a very powerful thing, and art can prompt empathy”, Litten says.

“I found a quote by Maggi Hambling where she said we need to make friends with our painting. I want the work to be challenging and disturbing to me, but I think lockdown suddenly made it very clear that she’s right. I really do need to make this work my friend”.