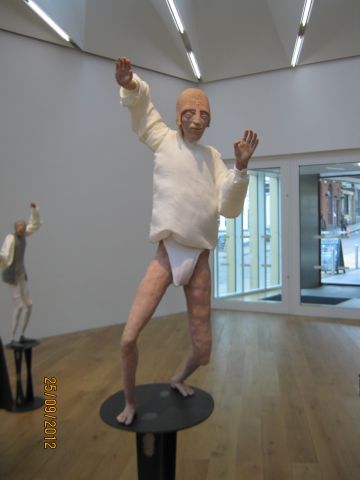 Accepting it doesn’t have to be an either or game, artistic intention is arguably a key factor in the interpretative interface of the public Gallery. And for me, with the work in this show, unpicking possible intentions seems of a particular importance if one is attempting to engage beyond the initial sense of curiosity that these sculptures undoubtedly exude.

In the first space one encounters a grouping of approximately 10 third height gangly figurative sculptures modelled with naturalistic features and accurate flesh tones. Particular fine detail is applied to faces, hands and feet. These parts are highly crafted and shades of Ron Mueck spring to mind. However unlike Mueck, these works have closed eyes and do not engage as such with the viewer despite various lunging gestures and postures. They also have elongated crude bulgy arms and legs, which put them closer to fantasy figures rather than ‘real’ life depiction. They are based on the elongated forms of the Bayeaux tapestry and occupy a similar level of visual absurdity.

There are two other key differences between the work of Upritchard and Mueck. Firstly She does not make the work herself, therefore She has a very different relationship in terms of the ‘author’ function. She initiates and directs. Secondly the use of the retro style plinths again commissioned not self made. They look wonderfully at odds with the pristine gallery, arguably close in aesthetic to pound-stretcher plate stands than any typical minimal contemporary display strategy. The collaboration with her husband a cool designer to evolve these curiously anomalous anti modernist plinths is highly considered and is no accident.

This dialogue with craft and the skill question seems central to the investigation of the work. The plinths are in raw metal with no attempt to mask the welding burrs. There is the deliberate leaving of visible lines of modellers ‘green’ putty, which repair fault lines and reveal the construction of the forms. This is a kind of nod toward ‘truth to materials’ honesty and is also part of this visual exploration of the art, craft, designer, maker, author discourse. It is this that stops them teetering over into quasi special effects visuals, and a potentially banal closure of meaning. It is also this that also stops the show in the second space being that bit too close to a display of crappy puppet forms.

The other thing that halts this possible creative death sentence is the sheer sense of pathos that the forms imbue. They gesture in combat suggestive postures, but they are resolutely feeble. This is emphasised by the clothing, pale and white and the pallid impotent sense of their baggy pants pulled up wedgie style around their decidedly un-endowed groin areas. Even in the other space where one yellow form sports a boner, there is something emphatically silly, lost and anti sexual about the yellow washed figure to whom it belongs.

In the other space, the introduction of colour is a reference to Kandinsky and expression. Here the forms make less of a collective group and evoke more of a sense of isolated and alienated forms. This amplifies the sense of pathos that rides through the whole show. This feeling of the sheer futility of endeavour and being adds a powerful emotional connection with the concept of disconnection. This is in weighty addition to all the aforementioned contemplative triggers. Crappily made artefacts also don the gallery to place a crown on this overwhelming sense of failed human aspiration.

This is a show that makes you, think, work and feel. All good for the creative soul. Go and see it before it closes.