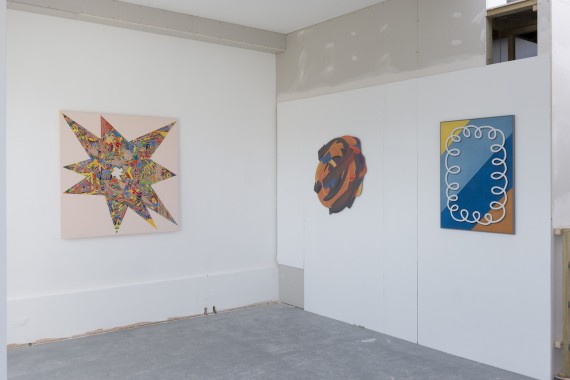 Abstract, largely geometric or reductive art is alive and well in the UK if this exhibition was an indication. Organised in collaboration with the online forum Saturation Point and featuring twenty three artists from every decade from the 1930s to the 80s, many of whom were linked to one another through teaching or friendship, the works were in a wide variety of media including painting, sculpture and drawing.

Giulia Ricci’s work, reminiscent of Jaray’s in its use of repeated geometric elements, employs laser engraving and painting to present patterns which disrupt almost organically, as if the two dimensional design was being disturbed by something rising from beneath the picture plane.

Geometric abstraction can’t avoid being haunted by various modernist ghosts. I couldn’t help thinking of Bridget Riley when looking at Patrick Morrissey’s dazzling canvases with their progressive variations of forms, and the influence of Frank Stella was visible in other paintings, including those on shaped supports.

One such painting, evocative of Stella’s three dimensional works but softer and subtler in its choice of colours and application of paint, was Julia Farrer’s A Knot in Time II, a mass of interlocking softly-rendered forms. Precise and detailed without losing warmth, it was one of the paintings here evoking a stronger sense of sculptural form and pictorial depth.

But the real surprise for me was that of Richard Plank’s work. The whole show was staged in a building still undergoing conversion into apartments and the unfinished appearance of many of the walls and floors encouraged an initial reading of Plank’s sculptures as three elaborately arranged but oversized projections of electrical cable or piping. In fact the satin black forms were 3D printed sculptures, and this application of still-developing technology to make something apparently much more hand-worked was an appealing combination. Perhaps, for sculpture at least, new technologies such as these are a way towards innovative forms.