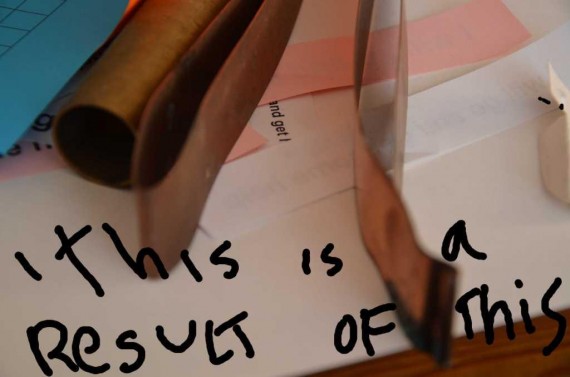 As a younger artist I sort of had an idea of where art could live and what it might be. It was a smaller and seemingly more logical sphere, comprising of several or more art worlds and it almost made sense, I say almost. There was kind of structure from DIY artists initiatives upwards, Frieze was not born, neither was the super Curator.  You sent off slides (return postage included), things happened. It was already an art world considerably more than objects and venues, but even new media art was, looking back, decidedly old school and the thing called the internet was not even a maybe. Things have changed.

Today for much art, the internet is still very much a site of tertiary consumption or translation. From object to image to web to viewer. And for any maker of stuff this inevitably has certain caveats. It is a wonderful dissemination tool, but is still frequently not the intended site of primary consumption. What it does do though, regardless of whether the work is intended for, or simply placed on the web, is to provide great avenues for reaching out to un guess-able global audience.  And most importantly it is open and almost democratic.

While still the maker of visually challenging and oft exquisite objects, Graham Keddie, an active interrogator of places, spaces and situations, has recently sallied forth into the realm of twitter as an host vehicle for his ‘probable impossibilities’ project. From march 6th 2015 to April 13th  2015  he posted a total of 33 visual posts on his twitter feed. https://twitter.com/grahamkeddie This is billed as ‘only on twitter’. Made for the web, on the web.

These posts comprise fragmented images from a limited pallet of; lines of typed text, some gridded paper, bits of cardboard, bits of hardboard, frozen moments of TV screens, scraps of metal, crude plans and a scalpel.  Each image presenting both a changing re-configuration of these, plus additional fragments of partially cropped marker pen written scrawl.  Combined they seem to bear witness to a evolving making process. For the viewer this gives glimpses, teasers and forensic clues but never reveals the whole picture.

As we progress from post to post on daily basis, we are clearly on some kind of journey, but not quite sure where we started or were we are going. Repeatedly occurring placed text lines phrases like ‘I will go and get some help’, place a sense of anxiety in our midst and at times I am reminded of the fragmented narrative of the TV series Lost, only on a playful pound shop budget. In the final image I see an object made, a crudely fashioned small silver space shuttle like form. Adjacent to which the words ‘men are morta’ in a cropped bit of marker pen scrawl. This deliberate cropping, allows the viewer to complete a word which might not even need finishing. This sits well across from the silver craft. It reminds us that we are ultimately insignificant, we are mortal, or maybe we are  just morta.  This choreography of matter, text and latent message is also fun to engage with.

This commitment to low brow media, in part a contemporary take on Art Povera is an aspect of Keddie’s work which is dear to my heart.  As a sculptor he eschews the hierarchically tainted materials of bronze, stone, with all their egotistical baggage and works with the very basics at hand. And it is this paired down poetry that makes his work all the more honest, sensual and evocative.

As an artist Keddie is very much both a planter and excavator of ideas. For his work sited at Fermynwoods entitled Title: 10:05:13-11:05:13/10.05.13/GK. Subtitled: The ‘Fieldworker in a Superposition’. He buried a sequence of everyday objects from ceramic plates and spoons, to safety glasses, lump hammer and a rifle form in a  Paddock following a one hour period, reading art theory. These still lay grassed over like archaeological finds for the future. An exercise in pure, joyful futility.

His strategy for deliberate and or random placement and recording is a shown in the subsequent publication. This shows a whole elaboration of crudely fashioned quasi surveyor’s poles with horizontal stripes and strings but as he stresses himself ‘the book is not the work’. Where the work begins and ends is itself part of the delight of his practice, as you can enter at various tangents and exit with any number of fragments.

Another key example of his varying strategies  is ‘The Lancaster’ One Metre Measured, where he re fashioned a square metre section of 20 year old Axminster carpet into the sculptural form of a WW2 Lancaster bomber, based on a childhood air fix model. A first reading suggests the domestic consumption of warfare as entertainment from the comfort of our own homes. But like all of Keddie’s work this is only the first of many potential references. For Keddie is an artist who firmly believes in research. Not as a po-faced academic exercise, but as a pragmatic working tool. His information reveals that the Axminster factory manufactured aircraft parts in during World War 2 and the motif on the carpet is borrowed from Turkish origins, which brings in referent to both historic and current Middle East conflict. The house from which the carpet hails is on an historic and current flight path. And one other thing, it looks great, using visual playfulness to draw the viewer into a complex and intriguing set of concerns.

Graham Keddie is an artist clearly committed to complexity, who invites you in as a viewer to glean, while he himself is in an perpetual state of gleaning. This honesty about the creative process is raw and down to earth and can be connected back to ideas of the ordinary as celebrated by the French Realists like Millet. Their initial transition of subject matter from the high-brow to ordinary, can be arguably seen as a forward nod to the inevitable shift of artistic process today. There are some artists who have ambitions to be ‘special’ and others who just want to ‘be’ and share in this quest of what it might be to ‘be’ through their artistic pursuits. I see Graham Keddie in his latter category.

Here is an artist that demonstrates how you can work with object, site or virtual place. And all are as valid as each other.