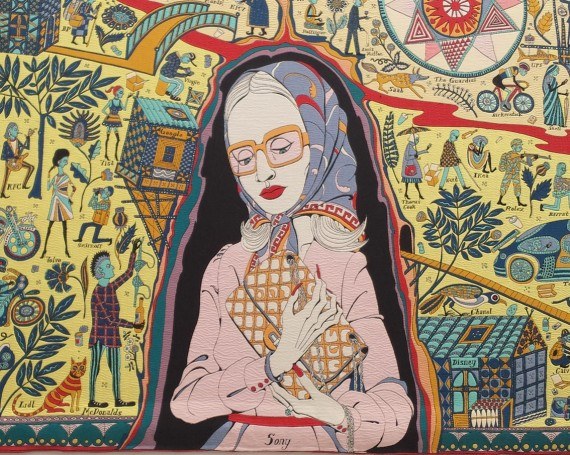 Back in 2001, I was asked as a MA student to list the three artists who most influenced my work. I said Hieronymus Bosch, Grayson Perry and Henry Darger. All the other students were naming conceptual & minimalist greats such as Carl Andre, Chris Burden, Richard Wilson, and Lygia Clark. I admit that it did take me a while to appreciate the vast range of ideas and languages which existed within contemporary art. However, I quickly learnt that my choices weren’t quite in keeping with my fellow students, and that in the elite world of the London art school, there were fashions and tastes which were frowned upon. The biggest of them being art that is popular.

Fast forward to 2015, and I find myself invited to the Grayson Perry opening down in Margate. I have followed his rise to fame with much amusement. A real outsider art hero, turned into establishment darling. I find myself doubting my loyal super-fan devotion to his work. Will his new Turner Contemporary show have the rawness and pleasure he managed to create in his Turner Prize show back in 2003? Or will I be subjected to the vacuous display of a dandy, consumed by his own ego?

Thankfully Mr. Perry did not let me down. The Provincial Punk show contains a condensed retrospective of some of the artists best works, many of which I had not seen. There is a room full of pots which are gloriously rude and imperfect. There is a room with a few of his maps, and a mixture of early and more recent ceramic works (including stuff from his TV shows). There are several smaller rooms which show early super8 films and animations. These are unresolved experiments, giving the visitor a glimpse of his early development where I imagine he was still uncertain of what his work was. Flooded by the light, three epic tapestries hang in the final room, their intense colours exploding from the walls in a manner which could rival the Holi festival.

Yes his work is in-your-face, scribbly, and shamelessly narcissistic. However, it is also honest, witty, sexy and in many ways very British. His clear showman charms have seen him rise to the status of celebrity, making Grayson Perry one of the most popular UK artists alive. Therein lies the danger; has Grayson Perry’s work fallen under the curse of the popular? Are we tired of hearing his Essex twang on radio four? After seeing the show at the Turner Contemporary, I still would happily own a poster of one of his drawings on my bedroom wall.

Perhaps the fact that so many people ‘get’ his work is proof that it is actually good? William Morris was hugely famous and popular in his lifetime, and his legacy has not yet crumbled, now that he is not here to charm us all on TV. Why does the art world have such a problem with art that is popular? Is it somehow damaged or stained by the thought that ordinary people, you know, the sorts of people that work in 9-5 jobs, and then go home and watch TV appreciate it?

Hear speaketh Jonathon Jones, art critic (and hero worshiper of Anish Kapoor giant Olympic phallus), on how meaningless Perry’s work is (http://bit.ly/1PBtTmp). I can just imagine him getting all red-faced about having to take the two hour train journey down to Margate to review his least favourite artist. He accuses the work of lacking mystery and otherness. Not every artist wants to linger in the tortured realm of expression without directness. The fact that Perry is willing to talk about his work and explain his process in a way most people can understand makes a refreshing change from the norm, and does not dull the lustre of his earthenware. Maybe by breaking this art world taboo; the curse of being popular, that Grayson Perry is performing his most contemporary work of all.

Nicole Mollett practise includes drawing, socially engaged projects, and performance. Nicole is interested in public art and what happens when art is created outside of the gallery context. Having worked as a lead artist on several regeneration projects in Kent, she actively promotes a more democratic approach to commissioning public art. www.nicolemollett.co.uk @NicoleMollett