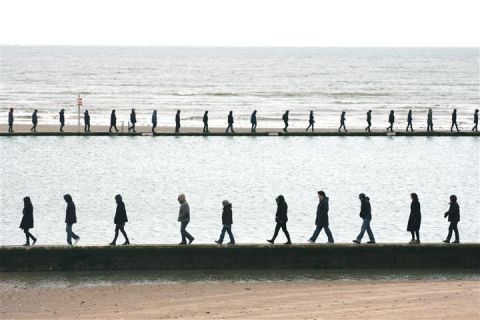 Walk: Where is the work?

Hamish Fulton is a walking artist. And I like walking – as a pastime, an art form, a way of moving, a way of thinking. And as I sat in the Turner Contemporary watching the film ‘Margate Walking‘ which documents a group walk in Margate specifically commissioned for the exhibition I was mesmerised. 198 people, one metre apart, walked seven times around the perimeter wall of a boating pool. The image was striking. Ant-like black limbed bodies marched in formation against the background. Bodies imposed onto the nature of that day; they demarcated the space and gave life to Fulton’s statement that ‘A walked line, unlike a drawn line can never be erased.’

This walked line which Fulton speaks of is the starting point for any work which he makes: ‘If I do not walk I cannot make a work of art.’ The resulting work varies from large wall texts to photographs- such as the one of a Buddha at the top of Chomolangma wrapped in scarves and prayer flags (although he does not consider himself a mountaineer Fulton has climbed Everest) – to small painted wooden objects resembling mountain shapes.

Yet I find myself more interested in ‘the walked line’ than in the work itself. And this was the fundamental difficulty I had with the exhibition. Fulton’s walks, I felt, did not transpose well into the Gallery space and while I did find little nuggets of interest, such as the aforementioned film with its intense and understated beauty, on the whole I was underwhelmed.

While Fulton steadfastly calls himself a walking artist it leads to the, perhaps obvious, but nonetheless pertinent question: where is the work?

I would suggest that a lot of Fulton’s work lies in the act of walking. Whether walking alone or in collaboration the walk is the work itself. Fulton is making his way through time and space, creating walked lines in the landscape. The art is in the moment, in the event of walking.

Yet that does not mean there is not space for art to happen in the representation of the event. While, as Fulton states, ‘an object cannot compete with an experience’ another experience can arise from the viewing of the object. As a viewer I wish to connect to the work, to find a reaction in myself to the work, to let the work transform me, to lead me somewhere.

Some of the work did do this. Black and white photographs told of walks in the past,at a time when walking as an artform was less known. Fulton notes that ‘As time passes, the physical action of walking only becomes more and more important.’

These works were beautiful in their simplicity: an old signpost with the text Three and a half miles to Newport Pagnell, a poster documenting a walk which took place in 1967 when Fulton was a student at St. Martin’s school of art, and, perhaps my favourite -Hitchhiking Times 1967 – a list which documents in time and place a journey Fulton took with two fellow students from London and Andorra and back again. These works imprinted on my mind a little of Fulton’s journeys and some of his experience became mine.

Then there was other work which left me empty. Fulton’s wall texts, which documented through text walks which Fulton had done, featured in this category.

Whilst not provoking any emotional response they did tell me of Fulton’s interests: the elements, the natural world and more political concerns like the Chinese invasion of Tibet. These themes are still running in my head and, although at the time I failed to appreciate the work, as I write this I wonder if maybe I missed the point. Perhaps Fulton is more interested in provoking a theoretical rather than a visceral response.