Heat Waves in a Swamp: The Paintings of Charles Burchfield - a-n The Artists Information Company 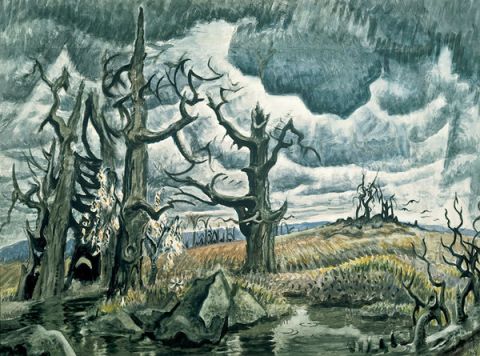 The famous Whitney Museum of American Art has amassed a reputation as being an important institution of American artwork exhibiting the likes of Andy Warhol, Cy Twombly, Edward Hopper and many more in the showcasing of what makes American art what it is. This summer, we are being granted a taste of photography, performance, sound and fine art the likes of which might declare The Hayward Gallery to be a little sister to this uniquely American institute.

Amongst the many exhibitions being housed at the Whitney this summer, it is Heat Waves in a Swamp: The Paintings of Charles Burchfield which stands out as an exhibition of painting in a range of media that captures our imagination. This exhibition is a collection of more than one-hundred major works by Charles Burchfield which includes watercolours, drawings, oils on canvas, sketches, notebooks, journals and doodles, almost rein acting a piece of American history that most of wish to forget: the early 20th Century. During this part of the 20th Century, America and indeed the world was subject to the Great Depression; Wall Street crash; World War One and modernisation. These were subject matters that many artists chose to focus on but even Charles Burchfield, who lived near Niagara Falls, found solace in working exclusively with watercolour and depicting the nature-based landscape. These were anything from lakes to woods and from swamps to the rare domestic architecture (houses, towns).

Charles Burchfield was under-appreciated in his day and in 21st Century art remains a bit of an enigma amongst the majority of art practitioners but any watercolour artist ought to know his work because although it is not over-the-top intimate and comforting, it is still important. Perhaps a contributing factor to his unfamiliarity is part due to the crash at Wall Street, economic crisis and WWI which brought even the most famous of entertainers out of the limelight for moments at a time. A great feature about working as Burchfield did in those days was uplifting people’s spirits by depicting not necessarily the full glory of natural landscapes and areas but rather depicting their cycle of life as means of ‘religious paintings’. Many households are probably subconscious collectors of his work which include wallpaper, Hallmark cards, decorative designs and more. Then came WWII and again, Burchfield’s work was enough to lift the spirits of a generation and country at war right up to the 1960s when change in the world was still not as central to Burchfield as were his landscapes.

Burchfield’s highly expressionistic light imbued in most of his work created clear-eyed representations of the world and for the rest of the time, provided a unique mystical and visionary experience of nature. It was also Burchfield’s unnatural man-made architecture which found its way into some of his work perhaps an ever changing transformation in nature and indicating the destruction of beauty for man-made structures going from poverty to prosperity.

It is for this reason that Charles Burchfield’s work might be reinterpreted by us as background pieces for a larger piece of foreground work such as a portrait or print. This exhibit would come recommended to all watercolour students as an in-depth exploration into nature in natural art.