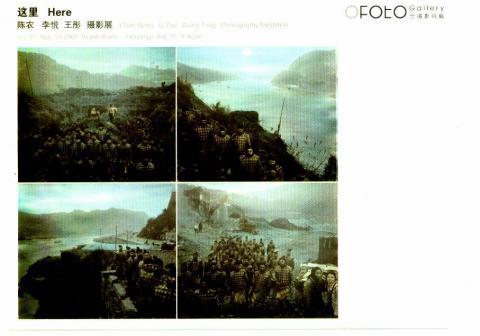 Several years ago, I was leafing through a large packet of curling black and white photographic prints. Taken by a relative as he roamed the streets of his home city, Shanghai, under siege in 1937, they captured both the smouldering tragedy in the streets and the profundity of events that would change the direction of many lives. This was one individual's attempt to grasp sense of the ‘here and now' as the past lost focus, the present disintegrated into uncertainty and the future was yet to be written. In New China, in 2007, Shanghai is rediscovering its passion for the future, but the globally familiar glass and chrome skyline images of Pudong do not speak for the many overlapping realities of life in China today. More salient is the complexity of the city's fabric and humanity; the dilemmas, contradictions, vulnerability, as well as the unstoppable strength and potential.

A group exhibition, entitled ‘Here', by three photographers, Wang Tong, Chen Nong and Li Yue at the OFOTO Gallery in the Zhabei district, therefore, struck a prescient note. It was an exceptional show, a quiet, but powerfully erudite ‘conversation' between the artists about the relationship between past, present and future in contemporary China. With an absence of worn cliches and latter strains of political pop, each artist had explored a different perspective and range of imagery resulting in multiple resonance.

For Wang Tong, the national political project of ‘Constructing a Harmonious Society' became the title of a series of nine acutely focussed colour photographs of walls. Hung in close juxtaposition, each image presented a length of public stone wall, framed to crop extraneous space. The focus became the complex multi-layered collective surface, where jaunty cartoons espousing the benefits of the official ‘one child policy' competed with more recent maverick graffiti, exposing an idiosyncratic and lively dialogue between the hands of past and present. Weathering and overpainting resulted in unexpected juxtapositions, even narratives. Here was a dynamic unofficial story of modernity in China.

Time suspended in a surreal monochromatic field characterised the series, ‘Dolphins, 2007', by Li Yue. Each print explored a scene of distant figures enacting ambiguous rituals, or games, in a desert-like scape, while above, in the sky, dolphins leapt and plunged. The sense of soulful release in these pale, technically exquisite images suggested a fragile thread of the past, or dreams of the future.

It was ‘Three Gorges 1' and ‘Three Gorges 2, 2005-06', by Chen Nong, though, that transfixed my attention. Here, allegory and art touched a truth. In the first series, eight extraordinary scenes, each hand pigmented on gelatin silver fiber paper, portrayed epic landscapes, a world of waste heaps, rubble, bulldozers, scattered residential housing blocks, rivers, highways and distant city horizons. The suggestion of a terrain gouged and excavated, chimed with removal and displacement, while, in the middle and foreground stood clustered groups of ‘terracotta soldiers' (individuals attired in painstakingly handmade cardboard costumes). Resolute and vigilant, the figures were both rigid and alive, as much residents and villagers of the present as relics of the past, but either way, destined for migration. The remade horizon maybe their tomb or a world yet to be imagined. However, if these ‘soldiers' were imbued with possible tragedy, then the inconspicuous intervention of female figures with infants in baskets, standing amongst and behind the gathered groups, were signifiers of a more hopeful fate. Extensive hand-colouring, in shades of blue and grey in the first series, and more surreal hues of green, red, yellow and orange in the second, only served to intensify the conviction wrought by the painterly hand in combination with the graphic ‘reality' of the photographic medium. In Chen Nong's vision, the voices of past, present and future engaged simultaneously. This was confident and mature work that, without farce or parody, had something profound to say.