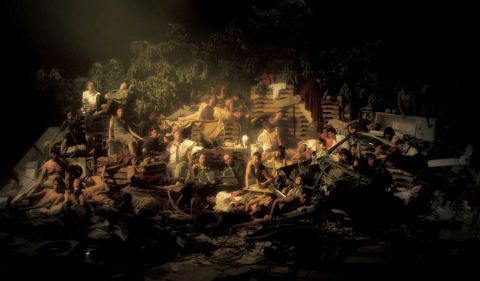 Singaporean artist and filmmaker, Ho Tzu Nyen, is not a newcomer to the international exhibition circuit. His first feature film, HERE, screened at the Cannes Film Festival in 2009 and his artworks which bring together sculpture, painting, filmmaking, performance and music, have been shown at international exhibitions and biennales over the past decade.

This year the artist is holding his first major exhibition in Sydney at Artspace in Woolloomooloo as part of the 2011 Sydney Festival.

The exhibition, titled Earth, takes the name of one of three major videos on show and is characterised by Ho Tzu Nyen’s mastery of moving image works based on biographical and philosophical narratives that are visually both poetic and visceral.

Projected at cinematic scale in the gallery, and 42 minutes long, Earth unfolded at a painstaking pace as the camera moved with measured precision across a theatrically choreographed scene, revealing frame by frame the detail of a post-apocalyptic landscape. Amidst timber and industrial detritus and overhanging clumps of vegetation, the limbs of prostrate human figures came into view, caught in the hiatus following an unknown natural or manmade disaster, seemingly in various states of unconsciousness, sleep or death.

Bathed in a surreal light, suggestive of dawn, and accompanied by a soundtrack of synthesised guitar music, the event portrayed seemed nothing short of the end of life on earth.

The artist has spoken of the influence of European painters and there is a definite resonance between Earth and the painting, The Raft of the Medusa, by French artist, Théodore Géricault. Géricault depicts the moments between life and death for fifteen survivors of the French ship, Méduse, shipwrecked off the West African coast in 1816, as they lie sprawled across a hastily made timber raft drifting aimlessly in a tempestuous sea.

The artist explained that “at a thematic level, Earth could be seen as just a film of cycles, cycles of people waking up and sleeping, or dying and being reborn, which would be a manifestation of the most basic way in which I understand life on earth.”

Despite the impression of watching a video of a painting, the artist was emphatic that the slight movements which occur during the 42 minute film are crucial.

A more conventional narrative was evident in the video, Zarathustra: A Film for Everyone and No-one, which was the culmination of a course the artist conducted with students of film, musical theatre, acting, fine arts and music at LASALLE College of the Arts in Singapore. Based on the philosophical novel, Thus Spoke Zarathustra: A Book for All and None, by German philosopher, Friedrich Nietzsche, the video explores the journey of the protagonist, a black caped Zarathustra, who descends to earth from a tower like construction (alluding to mountainous reclusion) and moves slowly and awkwardly through a shadowy landscape of discarded books, sheets of plastic and cardboard boxes. After delivering his message to people earth bound that ‘man is something that is to be surpassed’, he leaves his followers and climbs laboriously back to the freedom of the mountain.

It is a compelling narrative about the human struggle for self-mastery and will to overcome the environment. It is also the struggle of pedagogy and creativity.

“I think, in a way, Nietzsche’s Thus Spoke Zarathustra is the narrative of a creator, rather than an artist, someone trying to create something and the struggle that he goes through, which is metaphysical at one level, but it is also important that it is also physiological,” Ho Tzu Nyen replied, “The moments of haziness are not purely metaphysical, but you experience it corporeally with the body. I look at the video piece that I’ve done as a drama of haziness and lightness, carrying burdens, being slow, climbing upwards or falling down. It’s a way to translate the ideas of Nietzsche’s Zarathustra into a purely physical drama.”

“I think Nietzsche’s Zarathustra is very much a book about pedagogy, to share and spread knowledge,” he added, “but, at the same time it is about the contradictions of pedagogy and the tragedy of it.”

Moving from philosophy to science, Newton was the third video on show. It offered a highly abbreviated, quirky and anecdotal biography of Sir Isaac Newton, the pioneering seventeenth century English physicist, mathematician and astronomer.

An endless loop of eight scenes, each eight seconds long and filmed entirely in white, presented a sequence of brief actions: a book falls off a shelf and hits a man’s head; he turns the page of a book and types on a computer keyboard. A printer whirrs and emits a sheet of paper, which the man adds to his clipboard as he lifts a megaphone to shout ‘action!’

The work was obsessively repetitive and mesmerising, embodying references to Newton’s Law of Universal Gravitation and Laws of Motion, which include his theories that for every action there is an equal and opposite reaction, and that an applied force on an object equals the rate of change of its momentum with time.

Clearly, Ho Tzu Nyen is inspired by formal questions as an artist, but I was interested in the relationship between these works and the Singaporean context.

“For myself, at a very personal level, these works have as much to do with western philosophy as certain Eastern ideas,” the artist responded, “I feel very close to Taoism and certain aspects of Zen Buddhism. So the form itself would, for me, have certain resonance with aspects of these beliefs and practices.”

At one level, the Buddhist belief in the cycle of suffering and rebirth can be seen in certain scenes and narratives, as well as the cyclical, non-linear form of his videos, where a sequence of images continually loops, with the last frame the same as the first.

“Another very important thing for me is that I could be making works based on collages of western paintings, but the bodies in the works are bodies found in Singapore, which has always been a crucial part of what I do,” he continued, “That is the way I see my work. I think it is very much rooted in where I come from, but maybe not in an obvious way, like referencing Singaporean icons, but the rhythm or the nervous system is Singaporean.”

Ho Tzu Nyen is currently editing his second feature film and planning a solo exhibition to open at the Mori Art Museum in Tokyo on 26 November.