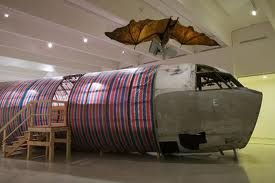 If one accepts that part of the primary function of a flagship regional contemporary art gallery is to present the provinces with international art as an elucidatory window on the writhing forces of global capitalism, shifting cultural power and the big conflicts and imbalances in our rather unjust world. Then how can it do so without issuing yet another tiresome and somewhat predictable preach to the already converted?

How does art deal with issue without simply being poor journalism, or for that matter second rate documentary? Particularly when the invention of the camera shed art from this burden long, long ago. Enter the works of Huang Yong Ping & Wael Shawky.

Huang Yong Ping has created a series of wonderfully bizarre visual tableaux that manage to utilize humour, play, subject juxtaposition and high production values to generate a delightful cocktail of visual absurdity and subversive polemic which attacks and unpicks the forces of global capitalism, religion and cultural position.

In one piece a life sized facsimile Asian elephant lays as if shot by a poacher in front of a make shift shop selling plastic Budha paraphernalia and utilitarian plastic goods. At first glance it looks like an actual dead elephant, but closer examination reveals a highly crafted facsimile made from Buffalo hide. Placed in adjacency they spark associations with spiritual, religion and the seeping forces of capitalism. The dead elephant sacrificed at thealter of consumerism.

Whilst this is serious art, the efficacy of Huang Yong Ping is to activate an uplifting viewer encounter and generate a balance between visual signification and the use of allegory with the sense that this is, on a primal level, work well worth seeing. Something that is in its essence, most extraordinary.

Another work is the historically informed Bat project, in which the front part of Lockheed air plane (as used in a catastrophic US spying mission over China), is combined with a crazy striped nylon and curved bamboo tunnel full of dead hanging bats. Like the Elephant this visually seems to belong, but is patently ‘out of place’ in the context of the pristine gallery setting. This deals intelligently with serious historical incident, but does not get bogged down in po faced sobriety for fear of losing gravitas.

Another smaller work involves a Godzilla sized stuffed Bat holding a cardboard US plane wing in its mouth. It is a visual treat that will hit the spot for any number of viewers. Power, predation and issues of global domination all come to the fore in this work. But not to the extent of killing the exuberance of the viewing experience.

Onto then Wael Shawky. His puppet films moved with a deliberate clumsy motion that makes the thunderbirds elegant by comparison, and as such they are highly visually entertaining and funny to watch particularly when you first sit down. Things start to change when you digest the narrative, which deal with historically informed depictions of the complex, cruel and savage campaigns of the Christian crusades battling to claim the Islamic and Arab worlds. Images of a human body being roasted on a spits, heads being planted on stakes creates an unsettling interplay with the more comedic connotations of the puppet theatre. The mix of sublime lighting, artful editing and poignant dialogue (albeit subtitled) left me touched, deeply moved and enriched. The relevance to the atrocities still being waged in the region in name of the West and the madness of the Israeli/Palestinian conflict springs very much to the fore when seeing the mistakes of history repeated over and over again.

This is a must see show, so much so I’m of again for a second look, first thing tomorrow.