Hugh O'Donnell: Being Gay in the G.A.A part 5 - a-n The Artists Information Company 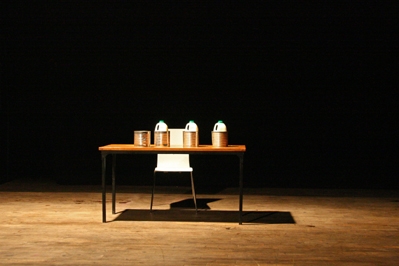 'Gender reality is performative, which means quite simply, that it is real only to the extent it is performed'.

'A homosexual cannot do the job of a footballer. The football world is not designed for them, it's a special atmosphere, one in which you stand naked under the showers'.

Ribbed Metal tins and a plastic carton of semi-skimmed milk have been symmetrically organised on a table. O’Donnell emerges from the audience carrying a gold handbag. A black and gold pair of football boots are removed from the handbag – the laces tugged apart, feet eased in and laces tightened. Handbag over the shoulder, O’Donnell circles the space distributing torn pages from a bible to each attendant witness with sad apologies; “Tá bró norm”. A table where milk is poured and spilt. A salt circle scribes a white threshold between him and spectators.

If the body is a historical situation then O’Donnell reproduces this situation, challenges it and subverts it. A coercion into a male/macho sport because of his gender and genealogy, he is expected to follow in the studded footsteps of his male predecessors; successful figures in Gaelic football. An assumption that a script will be strictly observed in accord with certain sanctions and proscriptions made on behalf of family and friends. Through these sustained social pressures and notions of abiding masculinity, O’Donnell finds himself on the football field on a cold winter morning, bewildered and fearful of the post-match showers where arousal may incur disastrous repercussions.

O’Donnell’s performance work invalidates and overturns fictions of gender reality. The effect of gender is produced through a stylization of the body and hence, must be understood as the mundane way in which bodily gestures and actions constitute the illusion of a ‘true’ gendered self. His transgressive performance work resists a universally enacted heterosexuality and ruptures an enforced patriarchal order where non-heterosexuality actions a radical politics – the personal becomes the political and the political is performed.

The handbag is placed over the head. O’Donnell spins in a circle. Milk splashes the floor. The ‘Match of the Day’ theme tune is hummed as circles are cut by scissors to expose a blue breast. Milk saturates the teat, flooding the nipple gorged and swollen. His gesture inverts the notion of maternal care as a primary model of seduction. His milk spattered breast is not an erotogenic zone of exchange which provokes and demands excitation, but a zone where assimilation into the oedipal triangle is rejected. O’Donnell expels himself from phalocentric prescription. He spits himself out of it and in the same motion establishes his own identity. Repeating with the other breast; cutting, flooding, squeezing and pulling. Attendant witnesses are confronted and breasts are pushed in their faces before O’Donnell disappears.

The white markings that once restricted and distressed have been traversed and a post match shower is well deserved. We hope its okay to be gay in the G.A.A. (Gaelic Athletic Association).