I Am Kurious Orange - a-n The Artists Information Company 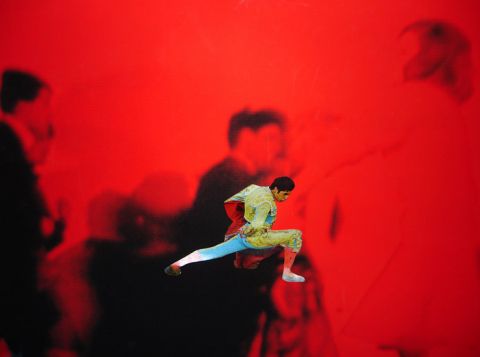 What distinguishes Anne Colvin’s curatorial project I Am Kurious Orange seen recently at David Cunningham Projects in San Francisco is its desire to rely on contingency, anticipation and occupancy above conclusiveness and completion. This Scottish artist and curator who has been based in San Francisco for some time and is earning a considerable reputation on both sides of the Atlantic has devised an exhibition and performance scenario whereby both artists and audiences are challenged by the simultaneous appearance of a residency, a series of performance rehearsals and an ongoing mutation of objects, materials, texts, props, music and video. Her show combines a camp theatricality within the white space context, a garage band mentality to process and presentation and an experimental, experience-led sensibility over the commodity and consumerist; a sign of the times and resolutely stating: Don’t Let the Bastards Get you Down. And “repeat viewing is not recommended, it’s required.”

The background to this project is a ballet and soundtrack: Mark E. Smith/The Fall and choreographer Michael Clark 1988 collaboration I am Curious Orange, released on vinyl as I Am Kurious Oranj. The work is themed loosely around the 300th anniversary of William of Orange's accession to the English throne, while the album is also notable for its reworking of English poet and visionary William Blake's lyrics for the hymn "Jerusalem”. It also side tracks and alludes to performance art phenomenon Leigh Bowery and video artist Charles Atlas’ film Hail the New Puritan and infers socio-political circumstances such as post-punk ideologies, queer politics, disobedience and sectarianism. It is this condition of reference, influence and experience that leads to a project that reflects more on the happening and live experience above the sedentary and passive. It is about the activation of a space to occupy multiple live actions and implies the need to participate rather than consume as second-hand ‘documentation’; it questions: “where you there?”

Anne Colvin presents a suite a new collages in one space that reflect on a video screened in another. It creates a symmetry based on physical presence and a divided spatial ‘narrative’; three large-format prints show abrasive collages between physical performance, dancers and bullfighters, and the still cinematic frame. The cut-out figures she employs touch on elegance, sexiness, ritual and physical prowess while punctuating the film stills, which include a Godard frame, with a post-punk disruptive punch. The video, Cracked Actor, shows dissonant repetitive frames from footage of a David Bowie concert, the light and the heat of his performance implying the fervent drama of rock and roll, the sweat of being there, the fan’s passion. Connecting these works is a black box pristine installation which shows a cut-out of Michael Clark from the cover of Artforum, the original Sadler’s Wells poster for I Am Kurious Orange and an assembly of associative materials from the original show: French Fries from MacDonald’s, a tin of Heinz backed beans, silver foil, and copies of original The Fall vinyl and cassettes. It is evidence of adoration and a subtext for the show on the nature of influence on the art artists see and the art they make. Colvin’s work, accented by appropriation and Postproduction, delivers a sensory animation on “fragmented forms, torn pictures, clashing ideologies. crumbling symbols and broken icons”. Finally she reprints William Blake’s poem Jerusalem, a collaged, visionary narrative combining an alienation toward the modern world, with a desire for heaven on earth: the poem was inspired by the apocryphal story that a young Jesus, accompanied by his uncle Joseph of Arimathea, travelled to England and visited Glastonbury (famous now for its annual rock festival) and another politically and patriotically slanted symbol and rock and roll mythology is intercepted and re-assembled. On the final night Colvin recited the poem as an introduction to a three-act performance, which combined live art happening, monologue and rock concert and kicked-off the proceedings with a kind of theatrical, hallucinatory mystique.

Marc Arthur, a young performance-led artist presented rehearsals in the space over the course of the project, working these into an installation of painted props, ephemera and a large-scale wall drawing. His ensemble played out a variety of scenarios towards the final night’s happening, a performance called The Key, which used Irving Berlin’s Let’s Face The Music and Dance with scenes from Milton to appropriately, for San Francisco, bizarre queer effect. Arthur takes on the mantle of Leigh Bowery in perfumed, ornamented audacity. His work featured a wrecked-out crew of characters lost in a world of amusement, hedonistic abandon and dislocation and on the final night, moving to an external location, turned the gallery from stage to spectacle. Using the orange from the show’s title, Arthur repainted the world in its hot hue, the colour becoming lipstick, paint, stain and mimic of bodily fluid.

Karla Milosevich, a Texan artist and curator, who has been based in San Francisco for a number of years, also used the space as public rehearsal. She played with gender role and expectation taking on the considerable reputation of Mark E Smith himself, and fronted a tribute band to play out selected songs from Smith’s arsenal. The equipment from these rehearsals were sited in the space as an installation, accompanied by lyrics, amplifiers, lighting and drum kit. Milosevich accepted the challenge to play Smith with complete dedication, learning to play guitar from scratch and devising a band, which included artists and musicians Cliff Hengst, Scott Hewicker and Kota Uetsu. On the night of the grand finale the space was elevated to pop history as she and her band, named Oranges for the night, played a tight set of re-interpreted The Fall songs including Mr Pharmacist, Cab It Up, and US 80’s-90’s (from the album Bend Sinister). It reflected in Vladimir Nabokov’s novel Bend Sinister: “This choice of a title was an attempt to suggest an outline broken by refraction, a distortion in the mirror of being, a wrong turn taken by life." Milosevich’s practice uses both Nabokov’s and Smith’s discourses to marvellous effect synonymous with this show’s premise: the magical moment, possibility, auditory illusion and allusion, the superstar condition, the fan condition, audience and artist becoming indecipherable .

Alex Hetherington presented in the space a double screen showing the same affirmative video, out of synch to each other and featuring a constant text: Yes O Yes, while behind, double images slicing through each other, one a bodybuilders’ competition, the other a series of ‘performance’ scenarios relating to re-enactment and the artist residency contrived to distort representations of the performing body, the gaze, the self-consciousness of performance and narrative. The film is silent though found its soundtrack nicely in synch with a variety of The Fall songs which hummed through the spaces on a loop of reverence. The monitors were accompanied by collages and prints mounted on tracing paper: a reproduction of Hieronymus Bosch’s painting of St Anthony and a poster from Steven Spielberg’s 1977 film Close Encounters of the Third Kind. Here Hetherington implies the visionary within the ordinary, the reclusive within the urban, and represents a neat joke on reconciliation, superstition and the outsider: Leigh Bowery, Mark E. Smith and Michael Clark as alien transfigurations. Hetherington’s performance on the final night narrates a series of interlocking statements, extracts and narratives surrounding shyness and social status, a reticence compendium delivered to an American audience unfamiliar with introversion and modesty. The texts includes a quote from a review on the French artist Jimmy Robert, who has re-enacted Yoko Ono’s Cut Piece, quotes from Dada and Marcel Duchamp on the readymade, and a series of observations on personality type, specifically the introverted and socially phobic, as described by self-help psychology publications and to the circumstances of ‘stage fright’. Hetherington’s final contribution is a series of collages, framed by ideas around double-consciousness that abrasively place one image inside another. The final effect is a nervous yet hypnotic affair which combines a slightly sinister take on personality and its appearance with a study on Mark E Smith and Michael Clark as opposite ends of the performance spectrum: magnetic and repellent at the same time.

I Am Kurious Orange inhabits that elusive of conditions; right place, right time. It rewards its audience with an evolving, challenging stratosphere of reference and multiplicity and requires of its artists and curator to brave the challenges of the inconclusive, the uncertain and the instantaneous. It is a study in re-enactment, motivations to perform, playing out ‘character’ and interlocking narratives all crashing and colliding, importantly, for one night only.