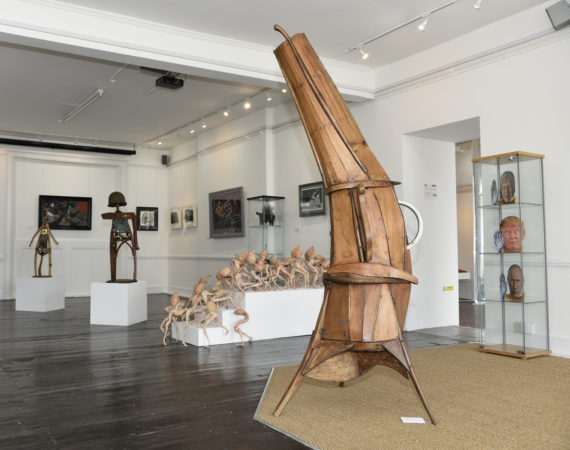 Techniques, surrealism is bound to its techniques – core of its substance, technique as content. Technique begets style and style is a way of being in the world, a statement of value, a living of what is valued. Postcard pastel, hard edge, illustrative style, repurposing, reusing, recycling – things and ideas. Language, visual language, noun-arms plucked from story – chairs, crabs, connotations shifting sideways. Jane Hoodless repurposes, function implicit in her ebony and hair pieces. Strands of hair project from a black ebony perfume spray bottle that will not be squeezed – inversion, reversal, an upside down world? 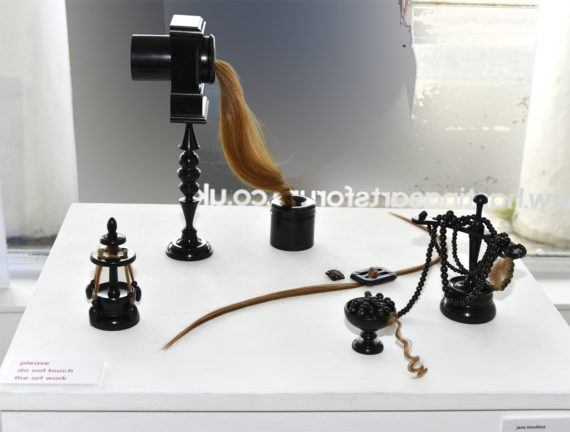 Hair that has been touched, carressed, brushed, admired , flicked, loved, pulled, flows into the Bakelite-looking telephone-like form of ‘Hair Receiver’. Such clean lovely hair. might hide a multitude of sins, or disguise them, never having been carressed or loved. Maybe it whispers an alternative truth into the reciever. Spider crab shells used by Jo Redpath – given (a) purpose by Jo Redpath? Life might be pointless but purposeful; Spidercrab shells may have a point but are incapable of purpose. Jo’s work extends the meanings that arise from the shell. All meanings are, like the crabshell, a matter of context. There is nothing in the world that cannot be influential; the power of influence is a function of the power of the imagination. So with surrealism. This show is ‘in the Light of…’ ideas, movements, the ‘ism’, the work of individuals,- we sense the presence of Dali, Magritte, Miro, Man Ray, Graham Arnold, Leonora Carrington, Samuel Palmer, Tanguy, Picasso, in the light of the unconscious /subconscious. Uncanny parallels between a purse, a pipe case and genitalia are suspended on a wall. 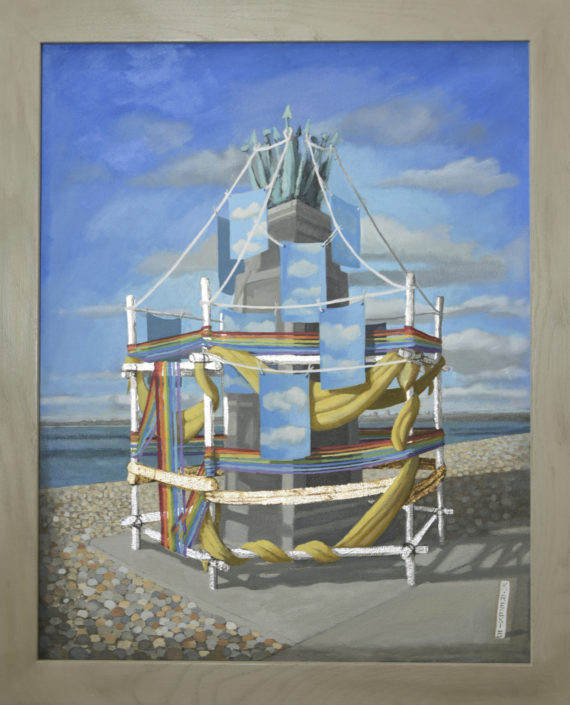 There is softness in the work of Katharine Reekie and Brian Catlin, softness in Jane Hoodless’s hair-pieces. Gentle graining and surfaces stroked by innumerable touches nuance Tim Riddihaughs ‘Chair’. Handle at the top, wheel in the middle, a bellied-boat-wooden-construction-with-small-doors- and – a – grille attests to the power of the lovingly-made ridiculous. In ‘Soldier’a set of brass taps stands so solidly for the genitals of a one-armed soldier, that its gush is almost audible. Tired bottle-top medals adorn his chest, With a motherboard where the heart is, his wooden limbs point to the past, a parody of prosthetics, an impossible robot, its motherboard awaits the future spark.
Hoodless and Jo Redpath are collectors of things. Collecting is connecting. The working fishing community on Hastings beach is a source of material for Jo . Her hybrid creatures formed with the shells of Spider crabs scurry up steps and through a door into the dark to who knows where. Their scurrying reverberates in the work of Gus Cummins. 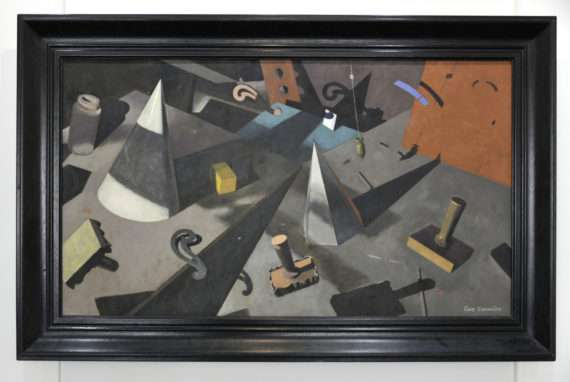 Gus Cummins is a painter. Shadows, black and material fold from floor to wall, objects appearing weightless cast shadows to the floor below. There is something on the move. I can hear the Sorcerer’s Apprentice? Disney? Disney and Miro embrace – inside the plastic paint – some occult force invigorates pictorial space. Fantasia’s score sounds. More Sorcerer than Apprentice, Cummins knows how to suspend the flow; his is an obedient brush. Muscular, pent up kinetic energy stores in the moment, and in the painting. Named ‘Impending Order’ its title says distrust, subtly objects to, undermines the orderly. Dali peeps in.
A White Rabbit casts a shadow in his enigmatic ‘Toy Box’.
Katharine Reekie’s paintings offer us strange constructions on the beach. Her paintings  feel subdued in their brightness. Her technique, of precision and control, or is it precise control, gives birth to a stillness of composition. Colour and edges evoke pastel softness, the sense of time stilled also. Tinted grey stones, pantings of stones, simplified paintings of stones, abound, lend an edge to stronger yellows, blues, primary colours. Where Cummins coils the spring and holds the moment, Reekie’s work is replete with stillness. 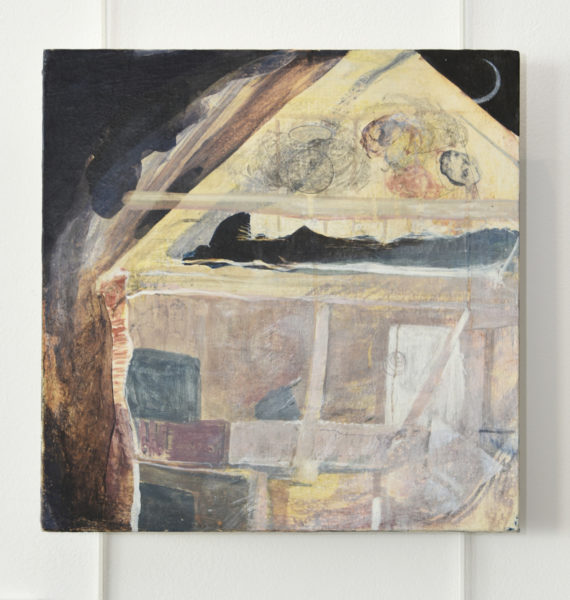 Brian Catlin’s three small tempera paintings have an Englishness about them, about their colour, their transparency. ‘Haunted House’, a little of St Ives, Ben Nicholson tints, gesso smoothness, ‘Another Flea’ shudders with anticipation. ‘Red Carpet’ a yellow snake makes ripples in the sky as it writhes down to a red carpet hovering. Behind it a cliff?
Jo’s Redpath’s ‘Shrimpman’ lies in the window, claw -handed hybrid exhausted missionary creature.
‘Nu Sans Visage’ nods to Man Ray, partially solarised, a photograph by Jacob Welsh. The French language creates an uncanny sense of authenticity, with  an elegance missing in the translation, ‘Nude Without a Face’
Mick Rooney works are weightily decorative and theatrical, linear detail drawn over surfaces, bodies and faces allowed solid form, a mix of substance and fragility, the contrast set in motion is both seriously playful and playfully serious. Observation and inventiveness dance together.
Kathleen fox’s pieces, ‘Arcane Lustre 1’ and ‘Arcane Lustre 2’ find constellations in the earth. Her ‘collaboration’ with small creatures in river mud, in this case from the Darent in Samuel Palmer’s Shoreham Valley. The creatures are not conscious of their patterned and textured creation as they move through mud that she has applied to paper. Into the muddied texture Fox ‘intervenes’ figures whose postures unite cosmos with microcosm through constellations stitched on them with coloured thread.The title of her small sculptural piece, ‘Cry Wolf’ can be read and reread, stated and restated, a kind of spoken sculptural metamorphosis of sounds and meanings in itself. The Wolf waits.
In Jo Welsh’s ‘Collage, Frottage, Montage’ a slow coming together of a kiss as two faces turn to face each other. Their proximity creates a third, negative space that in a tension of ambivalence and ambiguity unites and separates. 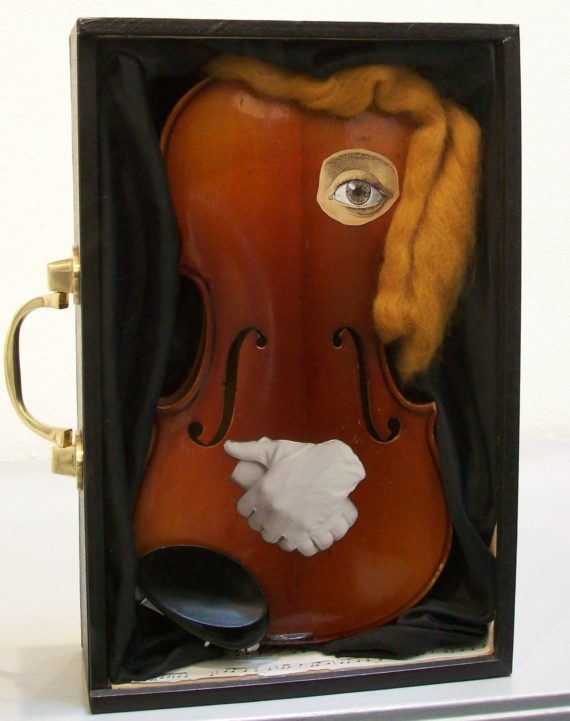 A neckless violin sits in a lidless case, in black cloth. ‘Virtuoso’ makes play with preconceptions. An eye and gloved hands cut and pasted, hands lying at rest on the belly- body. There is soft yellow hair – who is she? Is she, ‘she’? An opened and unshut case – what is this virtuosity? A virtuosity of identity, of gender? The figure questions, confronts us – ‘Well then? What then?’

Antony Penrose presents a simple trio of portrait photographs – Teresa May, Donald Trump, Vladimir Putin. Each politician’s raised hand is cut through with the sign of its nation’s currency. ‘Stigmata’ is the title, the rich and powerful stigmatised.The bottom line. Different faces, similar aspirations. Only since 2013 when Russia took on the values of the west has there been a sign for the Rouble. Capital is the stuff that nails all together.
David Minton