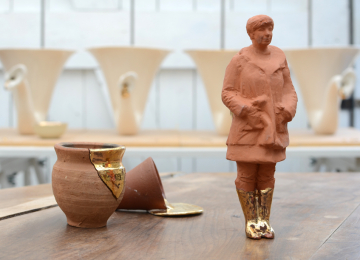 There is something deliciously forbidden about touching artworks in a gallery, even if, as with Ingrid Murphy’s current show Seen and Unseen, part of the Language of Clay series, at Ruthin Craft Centre, we are encouraged to do so. Murphy’s written endorsements for us to interact with her ceramics, though polite and respectful, are mindful of their fragility, exhorting us to ‘gently’ touch or ‘gently’ tap. A generous act of trust that pays off – for Seen and Unseen is an entrancing experience.

A series of fifteen installations, interventions, interactions, experiments – call them what you will – Seen and Unseen, though chock-full of quirky, up-to-the-minute technological wizardry, is, in essence, a homage to the ordinary, the familiar, those taken-for-granted objects that clutter our homes.

I love the domestic object, says Murphy in Lauren Heckler’s film that is playing on a loop on a small screen in the gallery. The film then cuts to an image of the artist stirring what looks like brown water in a huge tub between her legs. I don’t work in a linear way, she is saying: there are maybe ten or twelve stages to the making of each piece. Another cut, and she is now looking at a computer-generated image of a vessel turning on a monitor.

All this technology seems at odds with the essentially sensuous, organic humanness of her oeuvre. There are the found and then re-made objects, such as the chai cups in Sounds of the Pink City – a heavy three-legged table tattooed with what maybe a street grid and scattered with gold filled or patched terracotta vessels that when touched emit the street clamour of Jaipur. Or the re-cast souvenirs and mementos that sit atop an old 1940s radiogram in Sous Veneer: the doll’s head, the toy aeroplane, the rhino and the religious icons that when stroked discharge sounds from the various radio frequencies of their origin – that one is Jakarta, that Bulawayo, that Los Angeles, that Cork and that one the Dordogne.

There is an acute specificity to Murphy’s objets trouvés. In both aesthetic and tone they ooze a complexity of hard-to-pin-down nostalgia. Across the gallery the 1950s gramophone in Ceramaphone is coming alive seemingly of its own accord, sputtering static and flashing yellow lights. In two speakers, up-ended and exposed and fixed to the top of the cabinet, little clay pellets pop and scatter with the vibrations. Five clay plates with their splashes of gold, to be played on the turntable in place LPs, await our selection.

Standing before The Campanologist’s Tea Cup – an installation that reminds me of Marcel Duchamp’s up-turned urinal but is in fact five large porcelain renditions of an ear trumpet – I can hear Murphy’s voice talking about how she wants her objects to do something. Instructed to ‘gently ping the teacup’, I do so and the little rubber balls suspended from a marvellous Heath Robinson-style contraption above each trumpet begin to cavort and spin, creating a sonorous, ping-ponging echo. I am utterly entranced.

Murphy uses the word playful a lot. Her Grumpy Dogs, fifteen re-takes of the classic Staffordshire dog where she has invited other artists to customise them – one is covered in hair, aka an English Sheepdog, another has a face made from pen-marked tennis balls – are both playful and irreverent. Staffordshire-ware figurines and groups feature a lot in her oeuvre. There is that self-same, deeply-glazed white porcelain, unadorned except for the occasional touch of gold, but always with that wry twist, a computerised bar code, or as in The Cast, a series of portraits including one of Philip Hughes, Ruthin’s Director, holding a harp.

I don’t know what the pottery purists would make of it all. Seen and Unseen breaks rules. Is it ceramics, science, or is it mere spectacle? Clearly Murphy has set out to challenge our preconceptions, getting us to see the everyday in a new way.

Reaching out to place my hand on the ceramic hand of IO Touch, I hear Murphy’s voice talking about connectivity. The ceramic hand lights up. At the same moment, the notice tells me, its partner hand in Murphy’s home will also light up. The thought makes me smile and I repeat the gesture several times.