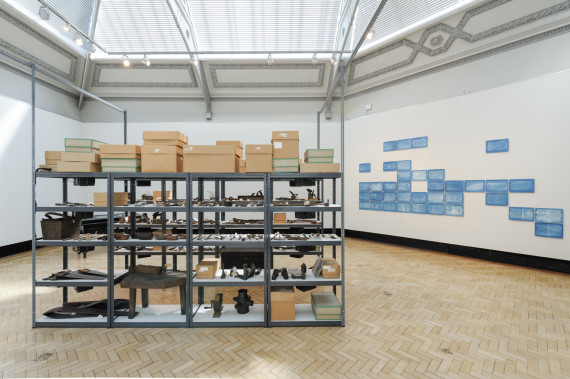 Jack Welsh: The New Opportunities Award, which aims to support experimental, artist-led museum interventions, seemed to be the catalyst for the exhibition; can you discuss how your proposal developed?

Hannah Leighton Boyce: The then curator of Touchstones got in touch and asked if I was interested in applying for the award; we wanted to work together and it seemed like an ideal opportunity. Once we’d started discussing potential ideas, I visited the Touchstone archives to start the thought process.

My proposal was concerned with reactivating dormant objects which are stored away from view in the archive, proposing different ways for galleries and museums to access them.

JW: Is the archive held within the Touchstones building?

HLB: No, it’s offsite in Rochdale. I was interested in the atmosphere of the archive as it’s a resting place for so many things. After speaking to the archivist and chatting about the site and history of the building, I learnt that the building was an old engineering works where they manufactured handtools. When I reached the collection of handtools in the archive, it seemed a natural progression from another of my recent works, The World Said, And The Consequence Was (2013-14).

JW: That almost seems ironic given the context.

HLB: Yes, the current archive is a modern building but some significant architectural features remain, memorialising the building’s historical significance. Crucially, I see the archive as the ‘resting place’ for these former handtools, a tangible link between the impact industrialisation and the rise of automation in contemporary society.

JW: Is the Touchstones archive mainly focused on the Rochdale area?

HLB: In my understanding, Rochdale’s original approach to acquisition, like many museums, was all encompassing. A shift in thinking in regards to collecting items with a local connection occurred in the 1970s/80s.

There’s a tangible link between the American Civil War and Rochdale; the workers of Rochdale went on strike in solidarity with Southern States [1] and they sent flour to Rochdale in recognition of this. The area has such an amazing history as the birthplace of the cooperative movement and this rich history drew me to the handtools in the archive, which, for me, represent the era before we became disconnected to what we make and how that’s impacted on how we approach work.

JW: As you say, there is a natural development from your work, The World Said, And The Consequence Was (2013-14). Instruments of Industry seems to be more faithful to your multi-disciplinary approach; the act of ‘ringing’ these inanimate objects to produce sound is performative.

HLB: The ‘ringing’ of the tools was a direct riposte to the inactivity of the archive. I rang a tuning fork in the archives and it met with the hum of the air conditioning; the sound disappeared. This fascinated me. I was influenced by how the actual musical instruments in the archive possessed a cobbled DIY aesthetic. This got me thinking about instruments and our connections to sound, the human pace, rhythm and musicality of making prior to mechanisation which resulting in me methodically ringing the handtools in the space.

JW: ‘Ringing’ as in hitting the objects?

HLB: In a way yes, but it was more of a gentle tapping… I had to suspend them in order to capture the different sounds and resonant frequencies. I was looking at ways to ‘touch’ and converse at a distance to these objects as I was unable to handle and work with them as tools; they had lost their ‘tool-ness’ and had become museological objects. 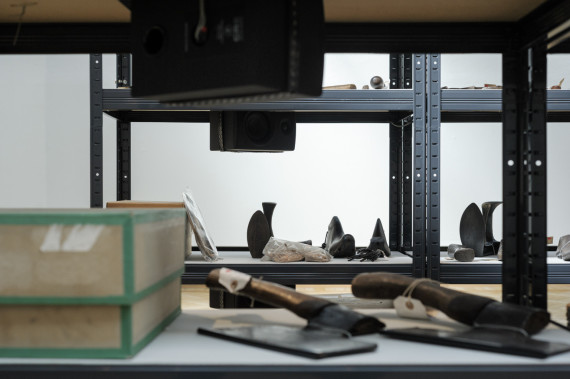 JW: Instruments of Industry is comprised of audio, drawings, archive material and 37 Blueprints of the notion of the score; can you talk about how you coalesced these different elements?

HLB:  I took me a while to decide how to compose the score but I eventually returned to my original idea of following the placement of the tools in the archive itself; I wanted the objects to ring from their ‘resting place’.

Each shelf (in the archive) is broken into a timeframe, this allowed me to place the sounds of each object into the composition as faithfully to their position the archive as possible…and not to interfere with it. The sound installation is composed as a series of eight movements, played through 8 sets of stereo speakers. The piece re-sounds all the 8 movements at one time, they generate, shift placement and position within the composition during the course of the exhibition.

The Blueprints reference the context of the engineering works and as an early way of copying documentation, each blueprint is unique – and a drafted process. There are also several ‘working’ metalpoint drawings’ which look at the fundamental frequencies captured from the ‘ringing’ of each tool within 8 octaves of the musical scale and archival material from Thomas Robinson and Son’s Railway works. 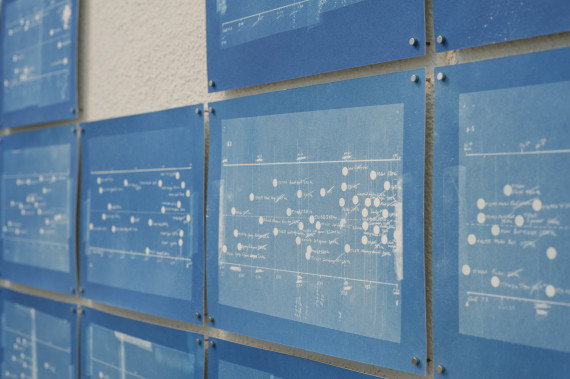 JW: The vitrine in the gallery contains documents from T. Robinson & Son of Railway Works, Rochdale – was this the company that used to be based at the archive?

HLB: Yes, they made tools and machinery for woodworking and later the processing of flour.

HLB: Yes, the firm closed in 1989 and its history is really well documented with many newspaper cuttings documenting its progress and its fate foretold in several articles and headlines “Robinsons’ buys the computer that does it all”, and again a later an article in 1985 states that in the name progress, ‘increased efficiency and better use of space and facilities’ that 85 jobs would have to go. 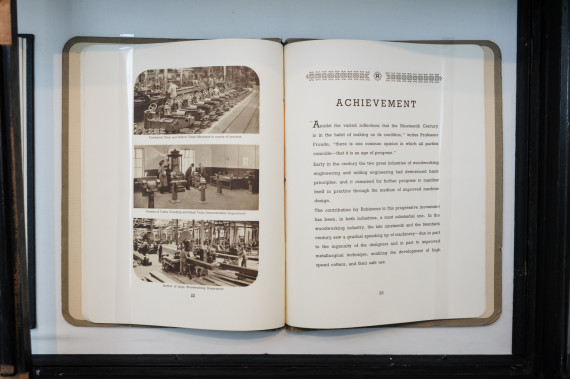 JW: The presentation of the tools is comparable to a police evidence archive room. It’s quite touching how something as banal as a rounded hammer can be so suggestive. I couldn’t help think of ‘history from below’. How do you approach these lost histories without being anachronistic? It feels crucial that you leave this open to interpretation.

HLB: I didn’t want to prescribe a romantic notion of the tools. I wanted the work to question our relationship to work now. The ringing is a signifier of the conversations those tools are having with each other; there is a resonance between the tools and us and our approach to work.

JW: I found the tones, responding to the weight and physical attributes of the tool, individualised each object.

HLB: As I was recording the sounds I was amazed at the range of sounds and frequencies and their individuality of them, it was really quite magical and an intimate level of conversation. 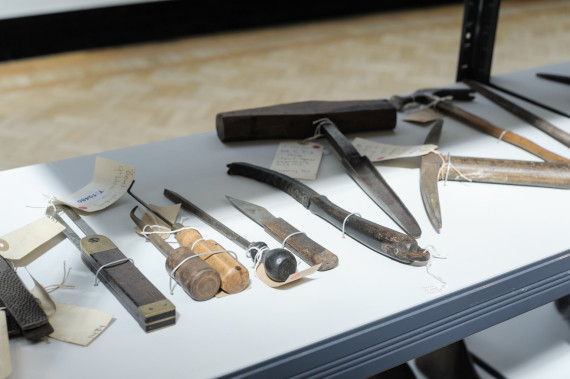 JW: The exhibition is meticulously structured and controlled in all aspects. This creates a tension between the societal responsibility of both the archive and museum; I considered it a direct challenge to the museum.

HLB: There is a definite tension between how we collect and store objects. These disembodied objects remove the human stories, the relationship between the tool and those who used it. We preserve the object to represent this history but we lose the physicality of its existence. I consider this a link with technological advance. I recently saw a child who was so used to swiping on a touchscreen but didn’t know how to use the non-responsive device. We’re increasingly becoming removed from using our hands in a complex, skilled way.

JW: That regurgitated meme asking what the relationship is between a pencil and a cassette tape springs to mind. Technology continues to rapidly advance from decade to decade.

HLB: When you’re making something with your hands, you possess the ability to control and alter it, to manipulate a material, you’re also aware of your actions and consequences/results of them. This one of the conceptual questions at the heart of the exhibition.

JW: The obsolete tools are physical representations of the Marxist concept of the relations of production. As I looked at each worn-down instrument, I kept asking myself how will our tools of work be displayed in a 100 years time? What does the rise of automation mean for the concept of work itself?

HLB: I feel our relationship to work is really important, for me, making and using my hands is a part of my processing of my thoughts, it’s connecting and gives a bodily intuitive understanding, a thinking and relating to the world through your body. Automation of ourselves increases a ‘mindless’ activity and disconnection rather than work where someone is valued and feels fulfilled.

JW: It’s worth noting the continued prevalence of computers in artistic practices; for many artists, their studio is their laptop.

HLB: In the last few years I have become increasingly interested in notions of ‘disembodiment’ as we are more than often elsewhere from where we actually are and labour becomes increasingly immaterial. What is absent, the social/human relations and how we’ve become the surplus…the effects of this disembodiment and disconnection from ourselves, our physical location and people around us. While it’s quite subtly put forward, I’m thinking where to go next.

JW: A handwritten note on one of the archival boxes caught my eye; ‘image of the object with its jpeg T10490.jpg’ I thought this was a subtle, possibly unintentional, tie-in with automation and work that summed it up.

HLB: It was unintentional and I didn’t spot that in all honesty. The way that objects are documented in the archive is very impersonal and unemotive. I think that is changing, objects all have a relationship to humanity. In a way, the text sums up concerns in the work.

[1] Rochdale supported the struggle against slavery, when cotton workers in Rochdale mills refused to handle slave-grown cotton in support for the blockade of the southern states cotton exports. During the cotton famine (1862-3), the people of Lancashire received donations of food carried from the USA by the ship George Griswold, specially donated by President Lincoln.

Hannah Leighton-Boyce is an artist based in Manchester whose works investigate our shifting relationship to place.

Using a research led approach, an exploration of place specific materials and process she explores historic and present day narratives, use, behaviours and language surrounding a place. Her works seek to animate, converse, resonate and perform in response to or within a specific site or location.

Jack Welsh is a freelance researcher, writer and artist based in Liverpool.

All images courtesy of Simon Liddiard.

Jack Welsh is a freelance arts producer and writer. www.jackwelsh.co.uk