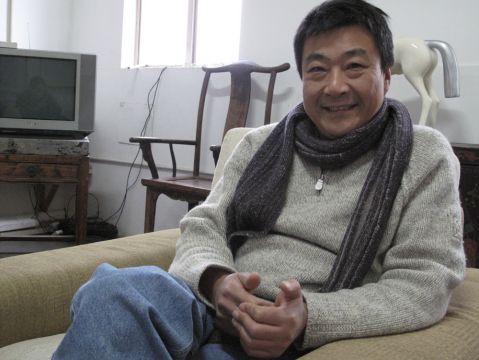 LH: You are an artist but you also run a gallery. Can you talk a little about this? How do you see these two parts working together?

LL: I have to say that since I have had the gallery, I don’t call myself an artist. Though I do a little of my own artwork.

LH: what do you think about the transition from being an artist to running a gallery?

LL: Artistically, I think it is quite easy. But, on business side it is not easy. I am personally happy with how I have promoted and helped other artists.

The reason to have the gallery? Well, most the time I see this from my own point of view. There just weren’t enough spaces for artists to exhibit in. As an artist, having more spaces to exhibit in was the most important thing. At that time, a lot of artists went overseas because it was impossible to show some kinds of contemporary art here. It was very difficult for them to make any money from art at this time. These are the reasons why I set up the gallery.

LH: What are your plans for Eastlink over the next 10 years?

LL: Big question. Back in the beginning, I think I would do it more for other people, for the community’s sake. I did not think I would not be doing it for such a long time. Yet, I keep finding a reason to keep doing it. I will continue, if I’m not the director for the next 10 years, then I would find someone to continue Eastlink, this is why the gallery is not the Li Liang gallery.

Contemporary art is still very new to the majority of people in China. If you want to promote contemporary art in China at least you need to be showing it to the public. There is not enough of this and ten years from now I still don’t think there will be enough of this. It is also to develop Chinese collectors. From the beginning artists were only able to show overseas. The largest numbers of collectors are from overseas too. It is not balanced. So if Chinese art always relies on the overseas market or overseas exposure, I would not be able to call this ‘Chinese contemporary art’. For Chinese art to develop it needs to be supported by its own community. I think this is my goal.

LH: You said that Eastlink and its history has been an emotional experience can you explain this?

LL: I think it is hard. If you go back to 1999, in a way it was also quite fun, much less commercial. The things that everybody was thinking about were all quite similar. The typical example is the ‘Fuck Off’ show. For me I put a lot of effort into this show at this time. At that time, politically and financial I put everything into it.

LH: While researching for this interview I read about the ‘Fuck Off’ exhibition. In hindsight, how influential was this exhibition? Do you think that other shows were as influential?

LL: I think it did a lot of different things. All the things were according to the times and what the art community needed. I really don’t care about the presses views. That ‘Fuck Off’ became the most famous one is really beyond my control. But you come back and look at it and it makes sense why this show was the most important or influential.

LH: In the West we perceive China to have stringent censorship. How in the day to day running of a gallery are you affected by the control of central or local government?

LL: For example the show I have on now. The Australian artist Rodney Pople said that he would have more trouble if the show were exhibited in Australia. This is very interesting. You change the position and the impact is quite different. Of course I don’t want to make shows to be based on ‘shock’ value. I never had this kind of intention. In the early days of course you get hassle from censorship, often ridiculous and not serious reasons and often the authority were unable to say why they did not want the show.

Back to the early days before China opened. Abstract art was Capitalism so we were unable to show this kind of art. But, from another angle I can’t see why people were afraid of this kind of art. Now there is less tension between the government and us. The last show that I remember that we could not open was an artist called Yu Da Hong, all his work was related to the Cultural Revolution the show was him and his students and they used Cultural Revolution content. Because that year was the 35 years anniversary of the Cultural Revolution the government didn’t want to draw attention to this. Just before the opening, the artist (who also worked at a local university) was put under pressure by his boss and the gallery itself was put under pressure to not open the show. But, it doesn’t really bother me because we live in China and we all know these things sometimes happen here. You can still do things that are valuable to the society, community.

LH: To me a large percentage of the Chinese population are interested in economic gain as apposed to or cultural enrichment. How do you think this is and will change?

LL: Still I think this is challenge. I agree with the government that this is a developing country. Only now, some people live in a big space where they can hang, or have artwork on the walls. It is only now that people don’t have to worry about next month’s food or school fees. In my youth everyone experienced this. And this is something that everyone experienced. It is only less than 30 years, or in effect less than 10 years. So we have to give people time. We have to give people time to adjust to that. People do need a culture.

For the next exhibition we are contributing to charity. We are putting the money towards the construction of a bathhouse in Gansu province. But, compared to Shanghai the people there are really poor. The people there are so into singing and dancing. They are really enjoying life. They are not any less cultured than people in Shanghai. In a way people are always into culture. It is only when people have more money do they buy expensive contemporary art. You can’t really say that people really always focus on money and forget about art or culture.

LH: You spent sometime in Australia as an artist. How instrumental was this to setting up Eastlink?

LL: I lived there for 12 years and shared a studio with other artists. One big impact on my in time Australia was the art community. We started to do things together because in Australia we faced a similar situation, lack of space to exhibit or display work. We were in a warehouse, which was situated next to the water. There was an economic boom in Australia so we moved to a new place but a developer wanted to buy this space as well. We all teamed together to try to buy the warehouse, to own our studio. But we failed because the developer put more money on the table. This experience was very useful to me when I moved to Shanghai. The first space was also on the riverside. So I thought, get together a few artists and get a studio and then it happened again, a boom in Shanghai, so we moved to M50. We were told it would be only be temporarily but more voices joined and now we have the M50 cultural centre so we are quite lucky.

LH: To you what are some of the greatest achievements of Eastlink and why?

LL: It is hard for me to say that. I always. I realise that there are lot of things that we need for the whole contemporary art scene. One thing we need is a good education system. Not only educate the public but the kids too. I really support education in the arts. We will give University students a show for example. It is about what I can give in terms of education to society or community. I think this is one of the greatest things Eastlink can contribute to.

LH: Many galleries in Shanghai only exhibit Chinese artists. Eastlink exhibits both Chinese and international artists. Why did you decide to do this?

LL: Two reasons, one reasons only showing Chinese artists is quite boring. You want to have a conversation a working relationship with different minds sets. The other thing is that for the Chinese audience gives them a good chance to see something else too. Maybe they only see it on the Internet.

LH: Members of the art community in Shanghai have said to me that the art scene here is changing rapidly and for the better, especially over the last two years. How do you agree with this?

LL: I believe it is improving. There is progress. I see it as very interesting there are few things that are in good way to develop. One way the old gallery ShangArt, foreign owned gallery, but we also see other foreigners open galleries in the city. I think it is really important that this is happening in Shanghai. They all love art and work with visitors and artists. I think this is very suitable for Shanghai because to me I think Shanghai always has a good mix of international cultures. Then of course you see the young people who feel they can do something with contemporary art or with other forms of culture. We see this as new energy. I think it is very good.

LH: Eastlink now has gallery in Beijing too. Why did you decide to open a gallery space there? How is the art scene there different from Shanghai?

LL: I have to say that the East Link Shanghai shows lots of artists from Beijing. At least half of the artists exhibited come from Beijing. I go to Beijing quite a lot, and I think. ‘Why not have a show in Beijing?’ Of course the reality is quite different. When you visit a friend or studios in Beijing to when you run a gallery there, it is quite different. I feel quite exhausted. Of course things are quite different there. Beijing is the capital; very important place and you meet different people. The people in Shanghai are different, less artistically minded. Of course I think I can get artists from Shanghai to show in Beijing.

LH: What advantage do you think the art scene in Shanghai has over Beijing?

LL: I do believe that. I dream that China will have two cultural centres, Shanghai and Beijing. I hope that it will be better, because Shanghai is quite an organised city, people are doing things quite rationally here in Shanghai; this is good for the arts, because we need to think long term. Every time I say the next five years will be better. Up to now, Shanghai has not had much advantage over Beijing.