Although painting and sculpture are normally spoken about as different art media, they intersect in fascinating ways. One thinks for example of Giorgio de Chirico’s silent piazzas with their haunting monuments. Or the relationship between Henry Moore’s remarkable drawings of the London Tube during the Blitz in relation to his well-known, massive smooth abstract sculptures.

Islam Zaher is a painter whose work strongly references sculpture. The paintings in the show Passive Constructions are not pictures ‘of’ sculptures, but they reference sculptural forms and the materiality of objects in space. This is manifested not only in the imagery and the evocative titles of the pictures, but also in the thick impasto techniques he employs with palette-knife and brush.

Passive Cruxifixion in a concrete space, Islam Zaher
Zaher’s eerie pictures – paintings and drawings – were, according to the Cairo -born artist, inspired by the idea of Pompeii, which was in turn stirred by his viewing the film Pink Floyd Live at Pompeii. It is always fascinating to discover how different art works – especially films and music – affect artists. Zaher relates the film to his own experiences of  walking the streets of Cairo amid the ongoing demolition and rebuilding of the city: ‘a deformed and crosslinked mixture of randomly designed buildings with concrete columns and shattered concrete beams that protrude from them and are crowned with iron fences.’ * 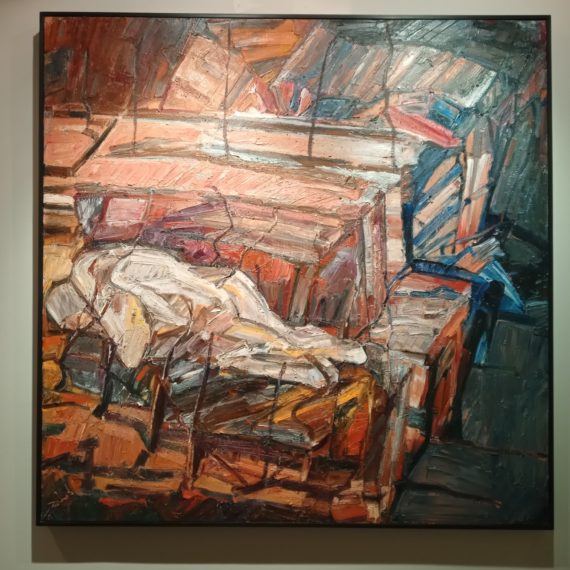 Zaher’s use of the word ‘passive’ in the show’s title and in the naming of many of the pieces is tantalizing. The pictures are anything but passive: they are chunky, solid forceful structures of paint and canvas or paper, depicting large and inescapably solid things. Inert they may be, such as the white Chair in the dimly-lit sepulchral space of A chair in a passive concrete space (2019), but each seems to contain with it a sense of imminence. Nothing is happening; something has happened; something is about to happen. Tension and stillness suffuse each picture, a strange yet deeply satisfying experience for the viewer.

* I would like to quote from the show catalogue here as I think Zaher’s text is wonderful, very evocative. I didn’t read it before looking at the pictures and forming my views.

He describes walking the ‘…Streets without names and an unrelenting absurd struggle between demolition and construction, as government departments represented by localities chased unlicensed buildings that violated building codes either in height or protrusions. Chasing them by demolishing the violating floors. The result is a deformed crosslinked mixture of randomly designed buildings with concrete columns and shattered concrete beams that protrude from them and are crowned with iron fences. Mouths and gaps penetrate the walls of red or concrete bricks to form dilapidated rooms similar to the burrows of small animals. The struggle between demolition and reconstruction might intensify until it reaches the degree that these buildings can be inhabited before the construction is completed. Grey and featureless people crawl inside as if the inhabitants catch the infection of incompletion from the building.

I used to walk every night between these buildings, which are unevenly stacked like the irregular breaths of long patients. Meanwhile my mind continues to reproduce these scenes that depict the residents of the stricken buildings as if, someday, they will also be evacuated by  someone, explorers, who will light them up and picture them in their burrows with their scarce furniture, mummified by bursts of concrete deposits and penetrated by iron skewers like fossilised flesh, while faces that lost all features and the burden of expression for so long … until they turned into vague statues depicting nothing.’

Gillian Mciver writes, makes art and films. She wrote 'Art History for Filmmakers' (Bloomsbury Press) and lives at www.artsite.org.uk Her main blog is at www.theartraveller.com