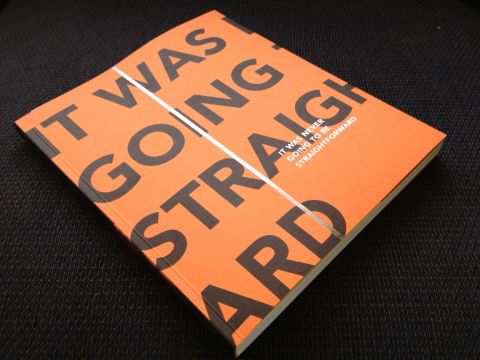 It Was Never Going To Be Straightforward exists as a celebration of the achievements of g39’s founders, Chris Brown and Anthony Shapland, and its staff, artists and volunteers during the first 13 years of its existance. In his text within this book, David Trigg suggests that all art writing is a form of pointing, in reference to a Clement Greenberg quote. On that basis, all I am permitted to do here is to point out that within this book, everybody and everything is pointing to Brown and Shapland, but in the most polite and congratulatory way possible.

Having studied fine art in Cardiff between 2006-2009, I feel I have grown up as an artist with g39; many other graduates from the Howard Gardens campus since the late 1990s will tell you exactly the same. Whether you are developing your ideas as a direct response to one of their many exhibitions or being tutored by a WARP coordinator, g39 has as much a say in the development of these artists as the art school itself. Now a freelance artist and curator, I have encountered many people around the UK and Internationally who can reflect on the effect g39 has had on their career, including a chance encounter with a previous exhibiting artist, Dave Ball, in Berlin. To a lot of people, g39 feels very much like an extended family.

During one tea-fuelled meeting (making use of the much-heralded chipped enamel teapot) I was introduced by Sean Edwards to a book that he described as a bible for exhibition installation – an essential manual for any aspiring exhibitionist (sic). In many respects IWNGTBS very much occupies the same mantle for me: if you are looking to establish your own artist-run gallery, this is the book to read. And while it doesn’t exactly serve as a manual as such, it offers insight far beyond that. The book catalogues key exhibitions in a manner that acknowledges a strict chronology while also neglecting it in favour of a more lucid narrative. It illustrates the highs and lows of embarking on the adventure that is running a contemporary art gallery; it highlights the perils yet never fails to amuse by pairing old exhibition texts with previously unseen documentation and commentary from valued contributors.

This is a book that doesn’t require sequential reading; one can dip in and out of. It serves both as a reflection and an entry point: a point of departure for many and a reintroduction for some. As I flick through the pages at random I am reminded of many artists and realise just how many of them I have been introduced to by g39 – also, several artists I have encountered in later years that, subconsciously, I must have been aware of through seeing their work on Mill Lane.

The inclusion of a small scale DIY model of g39’s former premises at Wyndham Arcade in many ways reflects both the gallery’s ability to exist and expand within the huge sector it operates, but also how it has come to be seen as something of a beacon for contemporary art in Wales.

In reference to Shapland’s comparison between a curator and a chef, if g39 were a restaurant (which it ironically now is since the location on Mill Lane now houses Bill’s Restaurant) then its reputation in Cardiff would surely outweigh those of the ‘bigger’ chains that affected its relocation to Oxford Street.