Joan Jonas: The Shape, the Scent, the Feel of Things - a-n The Artists Information Company 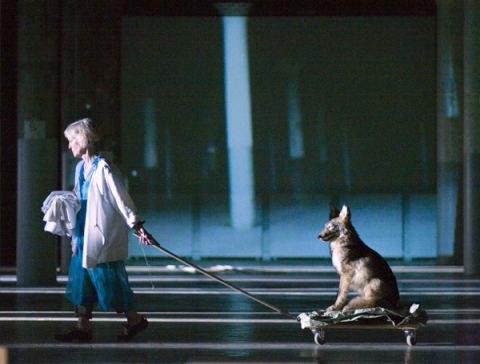 Joan Jonas is a leading figure within a group of artists whose use of live action and video at the beginning of the late 1960s and early 1970s gave rise to the contemporary genres of video and performance art. From her seminal performance-based manoeuvres of the 1970s to her later tele-visual narratives, Jonas engages viewers in a subtle, complex and highly theatrical portrayal of female identities, the performing body and its relationship to media and space, employing a distinctive language that combines rituals, calculated performative and cinematic sequences, texts and symbolic objects that include props, masks, mirrors and costumes. She maintains a practice that unite highly sophisticated technologies with an earthy, spiritually absorbed, physically sensitive attitude that occupies various critical territories, quotations and aesthetics that lead to multi-layered installations, multiple screen-based presentations and multiple meanings discernible through an immense group of highly-charged concerns.

The Shape, the Scent, the Feel of Things, is no exception to Jonas’ output and sees a five screen video installation accompanied by large-scale drawings of snakes, angled surfaces pinned with multiple images of animals, art history, places and abstract symbols, and a large cut out display of a coyote on a cart. Two of the screens show a woman and the coyote green-screened against a background of huge vistas shot around the deserts in the American Southwest, another shows the same woman and dog accompanied with neon signs, electrical power stations, vistas over Vegas, while a third shows empty spaces as seen on a journey through empty canyons, railway lines, high mountains in the distance, a more romantic take on the American landscape.

This is the basis for this work, retracing journeys through the American Southwest, through the plains in California and Arizona. One of the journeys retraced is Jonas’ own: she recalls through the work her own travels in the 1960s, which exposed her to native American culture, in particular Hopi traditions and rituals. Here she tracks and observes her own previously taken steps, now with the maturity of an old woman and not the allegorized youthful woman seen on the double screens. The second journey she layers through the project was taken by the German art historian Aby Warburg during the nineteenth century, early in his career, exposing him also to native American cultures, including, like Jonas, the Hopi traditions and their ritualized cultures. This journey was significant to Warburg’s later influential writing on Western art and was also the basis for his unfinished visual autobiography, the Mnemosyne Atlas: “A Picture Series Examining the Function of Preconditioned Antiquity-Related Expressive Values for the Presentation of Eventful Life in the Art of the European Renaissance.”

Warburg also suffered from schizophrenia and his voracious collecting, assembling and note taking, as well as his art history lectures to his doctors combines to build the body of the script and scenarios performed for Jonas’ principal video screen. Here we see an actor recreating Warburg, while numerous video screens appear and disappear behind him, or the video cuts to strange ritualized behaviours, like a man trying to fly with newspaper wings, or people in gardens cutting the long grass with ornate implements, close-ups of flowers, objects collected and placed in odd combinations and then cutting back to Warburg as the women around him, recording his statements, draw butterflies and moths. The soundtrack, to accompany the spoken texts, is by the Jazz musician Jason Moran, giving the whole space a light, hypnotic tone.

This divergence of meanings, visual materials, sounds, spoken voices, recorded information and numerous interwoven sequences and disquieting ritualized behaviours make for an uneven and complex experience: the performance of Warburg’s texts is delivered with emotionless clarity offset by the meandering, drifting video and visual material, it is nonetheless captivating, more so since I am about to take a similar journey taken by both Jonas and Warburg through the Southwest, which quite coincidentally will take me to the places shot and mentioned throughout the videos, America’s Southwest and in particular the deserts in Arizona (So I now feel bound up in its romanticism, its exposures). Jonas’ explicates the dimensions of this American space in both romantic and spiritual terms, concluding her work with a merger of past experience and present, fading, shapeless memories. It is underscored by the pull of these places, both in her mind, in her memory, in retracing other’s similar experiences, in the physical world and our romantic idealized visions of America’s great open empty spaces. She also concludes on the experiences that shape and define the categorizing and indexing of contemporary art, one that she attempts to filter through a more magical, contemplative, questioning eye/imagination: one though that could never, ultimately, be captured on these intricate, dense, beautiful yet inadequate video screens.