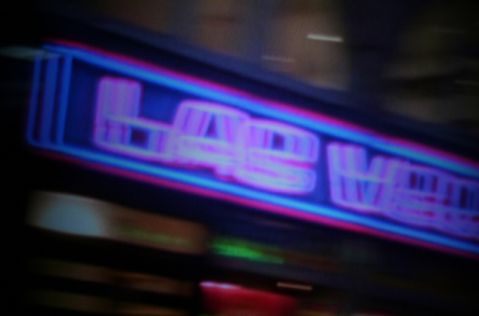 Entering the exhibition from the light-filled atrium into darkness suddenly shifted the perception of the audience, as if dropped into a basement without feeling the descent. Faced with an empty space but for 3 screens and one seating area, there was nothing but a voice and abstracted flickering images to guide the viewer.

Each video was shown individually, two inactive screens displayed time codes counting down until their next showing. From a central position my understanding of the room was limited by the dark, directed by the illumination of one screen and the soundtrack of the video. Starting towards the end of one narrative, it startled me how quickly my perception of the speaker was formed from her voice about her age, her background, even a mental image of her and the clothes she might wear.

These 3 videos, featuring a botanist, a gangster and a gay activist seem smaller and more intimate in reflection. At the time they were overpowering; uncomfortable moments were difficult to bear although my attention barely wavered from the direction of the audio even in pauses and moments of blankness. Each is a narrative portrait which is aided by visuals and emotive soundtracks but is driven by the voice.

While two of the videos feature archive footage, the third, that was used for ‘Nasty Piece of Stuff’ was made specifically for the work. In camera editing has been used to create jolting animation of a Soho street scene. The video starts as the speaker, Alan Wakeman, begins and the screen falls dark when he pauses. This video was the one which had the most emotional impact for me as I followed the narrator describing a rape, his calm tones becoming strained. The speeding up images and the tension-stretching pauses pushed their way inside my head.

The portraits, the characters’ stories, are compelling, whether they are sinister, shocking or upsetting. The voices are so distinct on recollection. ‘Inside Man’ slithered sleazily, the accompanying footage of a young woman dancing, the references to ‘sexual prowess’ and his self importance all enhanced my repulsion. I knew this character, with the voice of Ray Winstone, a British gangster from films and documentaries. The characters were immediate, I made connections and assumptions as soon as they began speaking.

My understanding of portraiture is limited. Recently an exhibition at the Thomas Schultë Gallery, ‘Video Portraits’ by Robert Wilson spelt out for me how short my attention span for portraiture is as I was enthralled by the interactive element. Each portrait was a video shown on a wide screen monitor with the subjects still but for tiny movements as they held their poses. The duration of each was activated by an audience member approaching with a remote control and increasing the volume to reveal the musical accompaniment.

With that in mind I am particularly interested in Baseman’s assertion that he attempts to make work that is ‘entertaining… very accessible but also reliant on a lot of work from the audience’. The removal of preamble in the form of press release, exhibition guide, invigilator introduction, vinyl direction or anything else that could intervene within the exhibition space was important to my understanding of the artist’s intentions. This is someone confident in presenting the work without background knowledge. While the work is completely constructed; the set up, the audio/visual elements, the composites of the interviewees, the audience is entirely focused on one voice, one portrait, at a time.

The work of Jane and Louise Wilson which uses four screen immersion techniques to engage the audience with architectural spaces is an interesting contrast to this method of presentation. In such works by the Wilsons there is no escaping the format. The individual is surrounded, the scenes are often in motion, panning and focusing on different spaces, showing them repeated across screens or attempting to create a sense of three dimensional space by showing multiple angles of the same room. In comparison Baseman attempts to remove the audience member from an awareness of the room around them, pacing and controlling the experience with minimal interference.

Using the documentary format is one way in which Baseman shortcuts the over-interpretation of everything surrounding the work. We accept the format, we know the conventions and a voice, a story, is listened to intently without a conscious decision being made. Then there is the darkened room and the time codes. There is a basic sense of the space, there is a knowledge of the order of screening and there are the flickering video images. The time codes are elegant, they lead without directing, inform the audience of a rough total duration and provide minimal illumination to the extremities of the room.

While the works are individually titled: ‘Joy on Toast’, ‘Inside Man’ and ‘Nasty Piece of Stuff’ the exhibition is given the name ‘The Most Powerful Weapon in this World’ relating to, well, the individual, the power of story telling, of video? From reading the text that accompanies the exhibition I would assume it is the power of manipulation. The editing process blurs the truth that comes from a first hand account. The addition of soundtrack and the separation of speaker from their image, replacing this with archival and newly made footage, subtly undermine the authority of the documentary format.

Baseman detaches the source and the manner of presentation, he employs cinematic techniques and creates dramatic tension. This provokes an active engagement with the videos, drawn in by the speakers but on some level aware of the difference between fact and the construction of the film shown. As Baseman (2010) explains himself, ‘I only let them say what I want them to say’, using their words but condensing and changing to put across his own message.

In further researching Baseman I was able to watch a number of videos on his own website and found the press releases for earlier shows, including among others ‘don’t stop ’til you get enough’ at Matt’s Gallery. I was keen to find how previous works have been exhibited. Watching a series of clips had less drama, although it is clear there is a driving force behind the work to create these composites, to not illustrate a story or dictate to the audience but to encapsulate motivations and lived experiences. The videos are a close up, providing just enough information to demand engagement. In installation, as with his carefully constructed films, there is time and consideration put into how to catch and hold attention, to make the audience behave in certain ways, to put pictures in your head, without you knowing it.