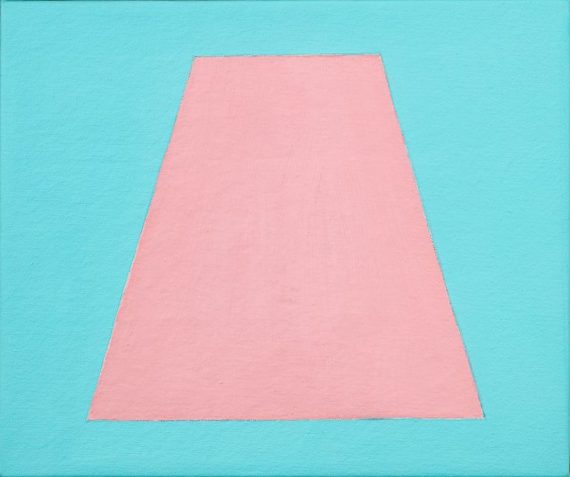 Julie Umerle’s second solo exhibition at Bermondsey Project Space, ‘Recent Paintings’, comprises pretty much what it says on the tin: new work, made over the past few years, both in and out of lockdown, pre- and mid-pandemic. Although comprising numerous series – Umerle’s series are, after all, always open-ended, with an idea for a new painting often deriving from a previous one – the works might be seen to fall into two main groupings: those with solid, architectural shapes or polygons (the Split Infinity, Black and Red, Polygon II and Unfolded Polygon paintings, for example) and the Clear Light splatter works, made during the first lockdown in March 2020. 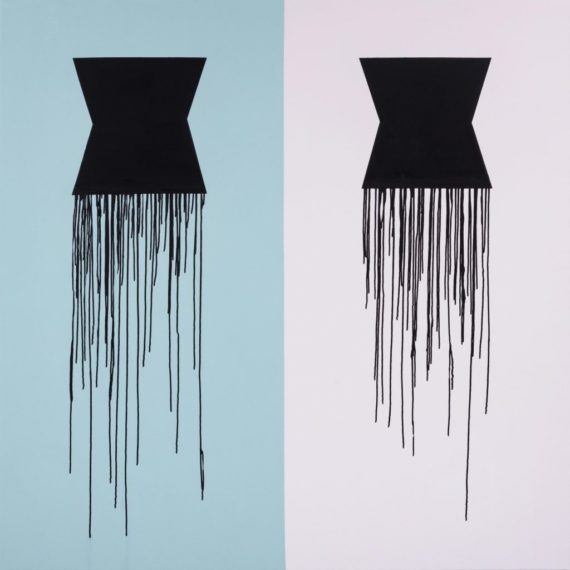 The Black and Red series, for example, dates back to 2018 and depicts solid forms on raw canvas. The simplicity of the neutral ground focuses the viewer’s attention on the coloured form – be it an octagon or the squashed cylinder referred to by Umerle as Ellipsis. Positioned so as to almost touch the edges of the square frame, the black versions suck you in, as if into an empty, echoing void, whereas the exact same shapes rendered in red do the polar opposite, leaping out at you, visceral and taking up their own space. Strongly influenced by the Abstract Expressionists and Minimalists, in particular Robert Motherwell, Umerle uses a red which epitomises the American artist’s comment that: ‘The “pure” red of which certain abstractionists speak does not exist. Any red is rooted in blood, glass, wine, hunters’ caps and a thousand other concrete phenomena.’ There is certainly a sense of concreteness here: certainty, absoluteness and even absolution. These works, too, are symmetrical, typically a sign of health and strength when found in nature. We humans are attracted to symmetry, and our brains are programmed to recognise and compute it more easily than asymmetry.

‘[S]ymmetry represents order, and we crave order in this strange universe we find ourselves in,’ writes physicist Alan Lightman in The Accidental Universe: The World You Thought You Knew (Constable, 2014). ‘The search for symmetry,’ he continues, ‘and the emotional pleasure we derive when we find it, must help us make sense of the world around us, just as we find satisfaction in the repetition of the seasons and the reliability of friendships. Symmetry is also economy. Symmetry is simplicity. Symmetry is elegance.’ 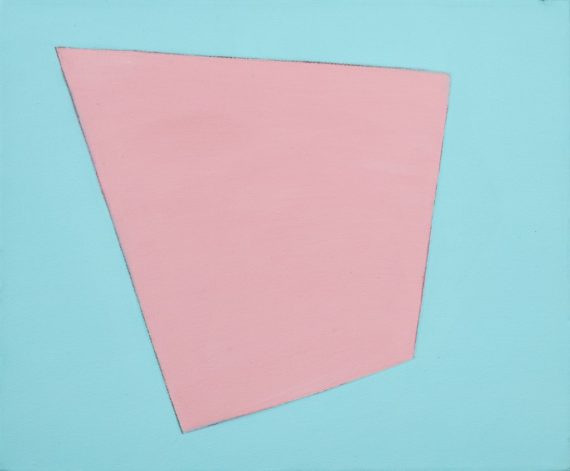 That said, research by experimental psychologist Johan Wagemans suggests that, while perfect symmetry might be more pleasing to the brain, it is not necessarily more ‘beautiful’. ‘Both art novices and experts prefer art that strikes an “optimal level of stimulation”,’ he says. ‘Not too complex, not too simple, not too chaotic and not too orderly.’ This concept might be summed up by the Zen aesthetic principle of fukinsei, which focuses on creating balance in a composition through the bringing together of irregularity. And so to Umerle’s Unfolded Polygons. Here she frequently turned to origami to ‘find’ her shape – hence the ‘series’ title – or, alternatively, worked with drawing. Although still solid shapes, her choice of light, soft colours and tints, using oil and beeswax, creates a delicacy and luminosity, a suggestion of birth (enhanced by the baby blues and pinks), or the unfurling of a new life form. Although still made pre-Covid, in 2019, it could be seen as prescient that the traditional form of origami is the crane, and 1,000 paper cranes are still sometimes offered to someone who is seriously ill, to wish for their recovery. The trajectory, then, is one of moving away from the absoluteness of the earlier works, to a more fragile, uncertain, and unbalanced composition. Furthermore, whereas traditional origami consists of folding the paper to create a sculpture, here, Umerle is doing the opposite – ‘unmaking’ a work of art (albeit in order to make a new – painted – one). There is an intimacy, not just in the smaller scale of these works – especially as compared to her much larger ones, such as the Split Infinity series (2017-20), with its mixture of architectural shapes, pastel backgrounds and viscerally coursing drips – but in the way in which they speak to the viewer, less boldly, less decisively, teetering on an edge, although what that edge is, remains, as yet, unknown. And how true did that play out to be?

Because then the pandemic hit. And the world changed. As did Umerle’s approach to her work. In her Clear Light paintings, the solidity has dissolved entirely, and Umerle, instead of painting stable, concrete forms, splatters white acrylic paint on to optimistically spring-coloured grounds. This looser, much less controlled technique reflects the growing sense of uncertainty and anxiety felt both by Umerle herself and by the nation – and global population – at large. Famously, Jackson Pollock, the father of the ‘splatter’ or drip painting, was an alcoholic – someone out of control, looking for control, through an uncontrolled means. 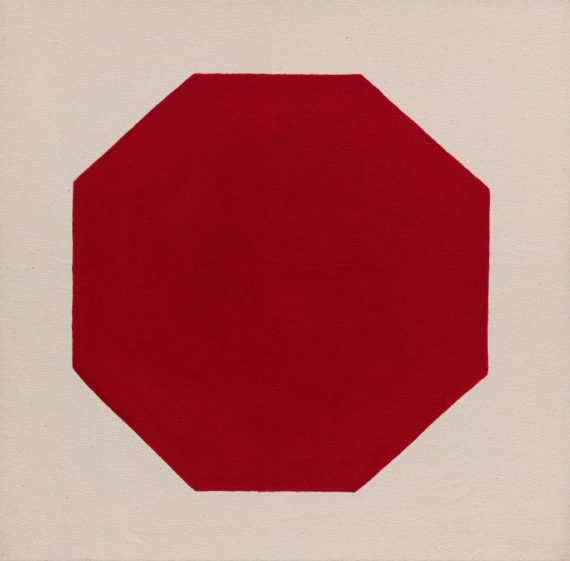 ‘The world is so unpredictable,’ writes American novelist and film director Paul Auster. ‘Things happen suddenly, unexpectedly. We want to feel we are in control of our own existence. In some ways we are, in some ways we’re not. We are ruled by the forces of chance and coincidence.’ This last sentence equally describes Umerle’s Clear Light series of paintings – a celebration of spontaneity and improvisation, a freedom not available in the concentrated architectural pieces, and yet simultaneously a reflection of worry, hesitation, and lack of confidence (not as a painter, but in what is happening in the world around her). The relationship between power and freedom – two concepts usually taken to be reciprocal and mutually exclusive, since being free means not being subject to someone else’s power, while to have power is typically to constrain someone’s freedom – is a helpful analogy. In instances where the power structures between those who give and take are balanced, the loss of freedom might be experienced as a gain, and the power is thus more equally distributed. Here power and freedom might co-exist. Bringing this back to Umerle’s work: on the surface, where the solid, concrete, decisive and decided architectural forms reflect power, the splattered light paintings represent freedom. And yet the question remains: which style is actually freer? Is there not more freedom in the former, where there is also that sense of certainty, safety and groundedness? Might these solid forms not represent both power and freedom? Do the splatter paintings from the first lockdown, while free in form, not represent a powerlessness, only translatable as something negative? Or is there a power in this freedom and uncertainty, too, as suggested by the spring-like ground colours?

As the Irish poet and priest John O’Donohue writes in To Bless the Space Between Us (Convergent Books, 2008), returning to Lightman’s reference to the repetition of the seasons: ‘Within the grip of winter, it is almost impossible to imagine the spring. The grey perished landscape is shorn of colour. Only bleakness meets the eye; everything seems severe and edged. Winter is the oldest season; it has some quality of the absolute. Yet beneath the surface of winter, the miracle of spring is already in preparation; the cold is relenting; seeds are wakening up. Colours are beginning to imagine how they will return. Then, imperceptibly, somewhere one bud opens and the symphony of renewal is no longer reversible. From the black heart of winter a miraculous, breathing plenitude of colour emerges.’ And perhaps there is no better description of the journey from Umerle’s solid shapes – via her Unfolded Polygons – to the Clear Light paintings. Amidst the fear is hope. And that is surely what is keeping her – and all of us – going, even now.

Anna McNay is an art writer and editor. Her editorial credits include working as Assistant Editor at Art Quarterly (Art Fund’s magazine),Deputy Editor at State Media and Arts Editor at DIVA magazine. She contributes regularly to Studio International, Photomonitor and Elephant magazine and has been widely published in a variety of other print and online art and photography journals and national newspapers. She regularly hosts panels and in conversation events at galleries and art schools and has judged numerous art prizes, both nationally and internationally.