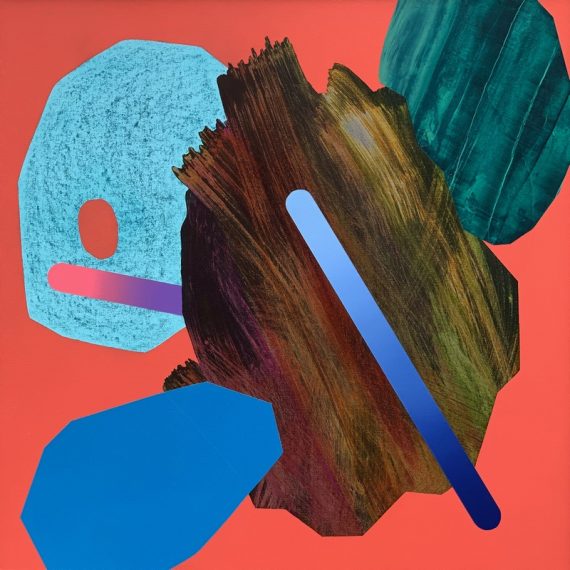 Just as Culture has many strands – dance, literature, opera, etc – so Art, one of the strands, has its well-defined, established disciplines – sculpture, photography, performance, etc.  And then there are its subdivisions that can be debated over and over – figurative art, surrealism, expressionism, etc.

‘Kite Circus’ is a fabulous survey show of one of its most discussed constituencies, familiarly abstraction. One of the show’s strengths is that it makes us realise the great breadth within what we might call, for the sake of argument and brevity, non-representational art.  Thirteen artists and thirteen unique approaches to the task at hand, making work that bears little or no deliberate resemblance to anything else, that relies on an arrangement of colour and form, clever use of materials and substrates to conjure hitherto unacknowledged emotions and resonances.  Decision-making informed not by mimesis but by personal choice, limitations, instinct and materiality.

There is something intangible in this work and that might well be part of why it has come to exist, artists seeking to communicate ideas for which words are inadequate.

In the late ‘80s, American singer-songwriter John Mellencamp posited the notion that the future of his profession could prove to be finite, with only so many notes and chords at his disposal.  One might imagine that this could be applied to abstract painting, but we currently enjoy Radiohead and Suzi Analogue experimenting with their medium and stretching its limits.

‘Kite Circus’ is curated by Nick Grindrod, with the artists carefully selected for the points of difference they provide.  His own paintings combine freehand paint application with distressed, geometry-driven pattern and forms.  His large ‘Cast of Billions’ is a tour de force, close stripes of high colour made more intense by judicious use of bare canvas to rest the eye.  Genevieve Leavold also makes use of controlled gesture, a smooth sweep of a large, fully loaded brush depositing its colourful cargo on a relaxed journey across the canvas.  This lyrical effect is broken only by a more graphic intervention of shards of thicker paint, which sits comfortably alongside Mark Jessett’s exquisite pieces made by the application of thin acrylic over a selection of coloured papers – the effect like fleetingly glimpsing a special moment.  The shimmering paper gives the painting a different look depending on the viewing angle.  Karen Foss’s small paintings, all entitled ‘Lull’ and hung in two sets of three, are equally seductive.  Softly-spoken to hold our attention, the richness of the colour relationships grows the longer we spend with the work and acts as a counterpoint to Christine Stark’s freer, dynamic series of four small paintings on wood.  Pools of glossy paint have been allowed to settle, before simple shapes of matt, almost pure colour were added.  These speak so eloquently of the abstract artist’s decision-making process, where risks are taken, happy accidents embraced, and then either remain or are worked over until a desired effect is reached, all the while creating a subconscious palimpsest telling/revealing some of this object’s history.  JFK Turner’s superb ‘Untitled’ contains similar elements of construction to Stark, and straddles a line between found object and painting.  It is an amalgamation of detritus reclaimed from the real world – urban driftwood – and his blithe, dextrous intervention creates an object, a painting, of undoubted beauty.  This collaging of materials informs Fabio Almeida’s immaculately compiled work, shapes echoing Modernist buildings, the muted palette reminiscent of the post-war era when design was infinitely less radical and considerably more tasteful.

In sharp/marked contrast, but no less evocative, is Jeffrey Cortland-Jones’ pale and delicate ‘Persist (Girl Band), made with enamel on thin acrylic panel.  Like Foss, its true, Minimalist elegance only appears after a period of extended engagement.  Hannah Delahay’s beguiling work has a real sense of the creative journey.  Close inspection reveals the process of careful building of the surface, and the equally painstaking erasure of areas to uncover the colourful strata beneath, like a treasured, well-weathered pebble. Additional interaction is led by geometry and a desire to restate the picture’s plane.

Bob Partridge’s paintings are the most gestural and visually complex on show, glimpses of underpainting revealing considerable reworking, as an array of painterly marks combine to intrigue.

The special properties of oil paint, colour and substance, are also manifest in Tom Wilmott’s rich, deep blue ‘Days I Lived a World of Nights’.  In contrast to Partridge’s ongoing readjustment in search of resolution, Wilmott has imposed strict parameters, limiting himself to a single colour and the simple compositional device of the diagonal.  Applied as if in meditation, the paint is sumptuously thick, like fondant icing, forming parallel ridges which create shadows and catch the light.  It is a stunning, mesmerizing piece.

While paint can have paste-like density it can be used as a stain too.  Sara Dare makes a feature of the canvas texture with her subtle layering of thin, translucent paint.  The resulting forms are blurred and ambiguous yet glisten as underlayers come through.  Again, her work is remarkably beautiful, as well as simultaneously joyful and tense.

The two sculptures by Richard Perry crystallise the thrust of the exhibition. One, in marble, could initially be assumed to have been moulded by nature’s elements.  Its companion, of limestone, has the look of Synthetic Cubism – a lighter, free spontaneity alongside cooler, thoughtful manufacture and all stops in between.

Kite Circus runs until March 27th.  The gallery is open on Fridays and Saturdays, 10am-5pm, and by appointment.