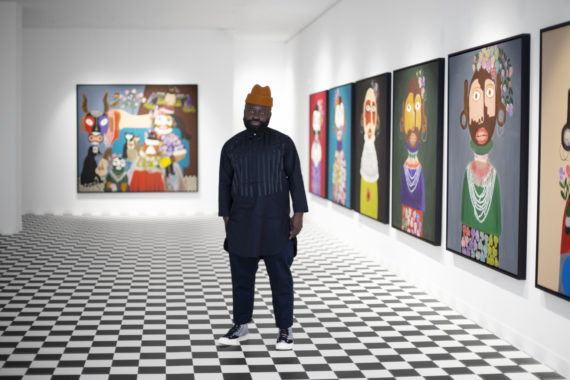 The London-based Ghanaian painter Kojo Marfo is posing for the young house photographer of JD Malat, the prestigious Mayfair gallery, who are putting on a solo show of his work until July 27th. All around him, on the big white walls, are his large-format paintings, featuring stylised, round-faced figures, some of whom have flowers in their hair. They are of indistinguishable race or gender and sport multi-coloured, beautifully textured garments. These portraits are dressed to kill.

As is Kojo. He’s wearing a flamboyant black silk top, smart black jeans, baseball boots, and, to top it all, a bright orange pill-box hat. He cuts a serious figure, standing there on that chess-chequered floor, the day after the private view of his first big show. I’m in a gaggle of people – a couple of PR personnel, several smart-looking gallery assistants – waiting for his attention: I have an interview with him, after the shoot.

He looks dauntingly sombre, to tell you the truth, impassively enduring the click, click, click of the photographer’s persistent scrutiny. But then a smile breaks through. The smile turns into a grin, the grin into a laugh. The mask has slipped, and the real artist has emerged. Kojo Marfo has got the giggles.

It’s no wonder that the artist is finding all this attention a little… well a little surreal. A year ago, when the pandemic started, he had to abandon his Hackney studio – he was no longer allowed to use it – and convert a bedroom in his Streatham house, to paint in. Back then, he wasn’t represented by a swanky Mayfair gallery, he was one of the thousands of artists who had to rely on online platforms as a portal to potential buyers.

We sit down at the coffee table at back of the gallery in front of his ensemble piece, ‘The Majestic Empress’, and, full of charm, he tells me the story of his sudden rise in fortune, his “dream come true”. His girlfriend persuaded him to enter his work for consideration in the ‘Isolation Mastered’ group exhibition at JD Malat, in Davies Street, last summer. He was chosen, by the likes of Gavin Turk and Simon de Pury, to be one of the twenty-five artists shown. This led to JD Malat personally paying him a visit to sign him up on a more permanent contract. Marfo was, he tells me, impressed by the gallery owner’s casual approach, and garb: “the art world is full of suit-and-tie people, but the artist doesn’t wear a tie.” 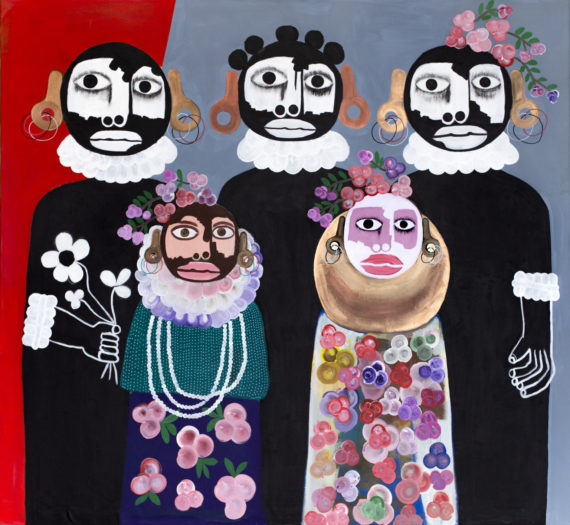 Malat, clearly, was convinced that he’d helped unearth a gem. Marfo, who is completely self-taught, classes himself, among other things, as an ‘Afro-Expressionist’, a genre which, of course, is all the rage. One of the Isolation Remastered judges, David Bellingham, later commissioned to write an essay on Marfo for the exhibition brochure, dubbed him, in his notes, the ‘African Picasso’. And indeed, Marfo cites the Spanish artist as one of his major influences, which trip off his tongue, when I ask him: “Picasso, Leger, Wifredo Lam, Ibrahim El Salahi, and all those guys.” 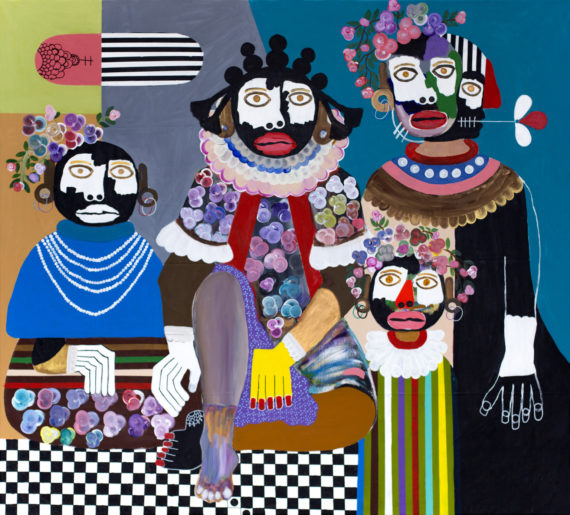 Marfo may not be classically trained, but he admits to being obsessed with art. He spends his days wandering round London’s galleries; when they were all shut in the pandemic – “when the world became a big prison” – he cycled round the city to teach himself about its architecture. “You should see my studio,” he says. “Art books everywhere.” He counts himself lucky: “because I’m not classically trained, I have the freedom to tackle whatever I want to do, without any constraints.” He largely paints at night.

Kwadwo Marfo (Kojo is a simplification) was brought up in Ghana, his mother a Jehovah’s Witness, his grandmother a Catholic, his great grandmother a spiritual healer (Ghanaian society is matrilineal, and he goes as far as to call it a “matriarchy”). He was born and bred in Accra, but feels more rooted to his ancestral village, Kwahu, in the east of the country. He moved to London, permanently, at the age of 20, just over 20 years ago. “My work is full of objects from my African childhood, such as the Akan fertility dolls that you see everywhere…” he tells me, “…but I have lived all my adult life in London. A lot of the symbols I use are taken from European art. I call myself a ‘cultural hybridist’.”

When I ask Marfo what people back in Ghana would think of his paintings, if he took some of them home, he smiles, before answering: “they wouldn’t see anything connected with themselves.” But this, he says, is what he wants: “I want people to see my work and say ‘why did you do this, Kojo?’ Then we can start a debate.”

That debate might be about race, of course, but Marfo appears relatively pacifistic when it comes to culture wars. “That’s the reason my work doesn’t have the likeness of the people I’m painting, because the moment I paint a black person, it’s another conversation. Nowadays there’s a lot of identity politics going on. I try not to fall into that. People hide behind activism and say terrible things. I just want to bring people together.” 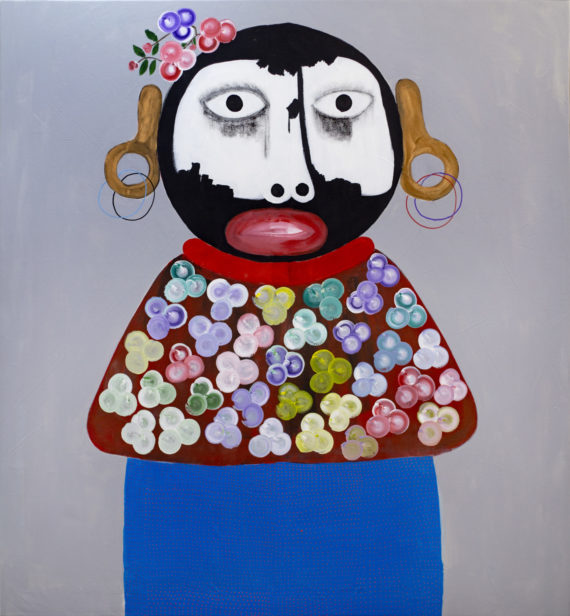 Interview over, I take another walk around the gallery, with new eyes, remembering Marfo’s persistently positive message. The nine individual figures in the ‘Strangers’ series are striking enough, painted to emphasise that “everybody is a stranger when we first meet them; my mum and dad were once strangers to each other.” But it is the ensemble family groups which really bring out the hybrid depth of Marfo’s work. I stand in front of ‘Noble’ for quite some time, trying to decipher its coded imagery: two adults and a child stand on a chequered floor, just like the one of the gallery. They wear ruffs round their necks, their earlobes have stretched holes, full of rings. Behind them is a cow, with pearls round its neck, and a doily on its head; to the left a dog, looking angrily away from the family group, its mouth a zip. A bird sits in the blossomy branches of a tree growing out of the shoulder of one of the adults. I can see some of the influences Marfo has cited in there: the block colours of Leger, the playfulness of Picasso, the hybrid creativity of Lam and El Salahi. But most of all, I see the work of Kojo Marfo, one of the most exciting artists to have emerged, post-pandemic, from London, his “cracked melting pot” of a home city.

Kojo Marfo ‘Dreaming of Identity’ is open at JD Malat Gallery until 17 July 2021. It is a part of Mayfair Art Weekend. Limited edition scarves have been produced in a collaboration with British Brand Aspinal of London. A talk will be held with Kojo Marfo and Dr David Bellingham. Find out more at www.jdmalat.com