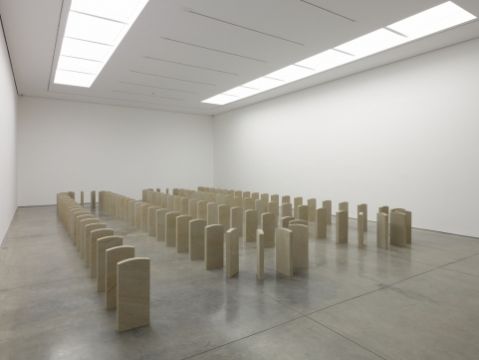 When anticipating a show comprised of work by an artist with such a fluid and diverse rang of practices as those mastered by Kris Martin, there is an excitement and curiosity upon entering the gallery of what you will be greeted with. Combine this with the prolific White Cube, Mason’s Yard, which has played host to internationally recognised YBA artists Damien Hirst and Tracey Emin, in addition to critically acclaimed artists such as Turner Prize winner Anthony Gormley, and prospective viewers cannot help but envisage a worthy show.

Although consisting of only three rooms, the White Cube curators have not seen this as a limitation to a narrowed down display of mediums, but have instead used the space to demonstrate just what a broad spectrum of materiality Martin creates from. Lest not to say the show is in any way chaotic; the concise and premeditated planning one would expect from the White Cube is present in the selection of works. All carry Martin’s mark of the memento mori, subtle in places, in others, not so, to engage with Martin’s career long exploration of the notion of time; his motive ‘to mark, halt or transcend its inevitable passing.’ (White Cube, 2013)

This monumental and universal human concern is conversed with through ‘a wry sense of humour and play’ (White Cube, 2013), perhaps manifesting itself most prominently in the installation occupying the basement; Untitled (2013). Descending into the space, there is no doubt that the scene you enter into is striking. Precise copies of British gravestones, with space for an epitaph left completely blank, cannot be disentangled from the sinister. Not that Martin would want you to. This clear reference to death is the build up to the joke: the punch line being the arrangement of these sculptures. Set out like dominos, the association is steered away from mass graves to a game of chance. Life being condensed down to mere fate, a succession of events caused by the domino effect. While some may struggle to find the comedy in the slightly macabre, Martin himself vocalises this internal emotive conflict by stating ‘It’s very strange, the best jokes are made about the most horrible aspects of life…Humour neutralises, makes things bearable, although they are not. It’s an illusion.’ (White Cube, 2013)

While Untitled, 2013, does not shy away from that which it was created to say, I feel the curation of it does. The presence of a low barrier keeping the viewers on one side, the art to the other, leaves audience participation to take a hit. With the White Cube’s website itself stating ‘situational experiences, events and performances are afforded as much weight in Martin’s practice as visual or sculptural objects’, (White Cube, 2013) a raw element of Martin’s practice seems to have somewhere gone awry. When comparing it to Martin’s 2007 Frieze piece, the same bravery evident in a woman’s voice calling out from a tannoy, addressing Frieze followers to perform ‘one minute of silence for no reason. For nobody. For nothing. Just one minute for yourself’ (Martin, 2007) is cut down where the barrier lies. Eager viewers look to the sculptures, longing to move among them and feel the same presence and all encompassment they felt at Frieze. But we do not. We stand politely and observe.

However, we are in the White Cube. We are not at Frieze, there is not a frantic energy within an all consuming crowd, which needs to be harnessed, stopped, spun on its head; we are in fact viewing a well-lit example of an artist’s conceptual crafting. Perhaps it is more appropriate that I am on this side of the room after all.

The next downstairs space continues along the same vein of orchestrating a narrative with a lightly comic twist, showcasing collages of 17th and 18th century engravings overlaid with colourful images, including a parrot and a butterfly. These 2D works both compliment and contrast the dominating stone sculptures, as by working with antiques prints Martin has ‘remade these found documents in subtle ways, creating new narratives and layers of meaning.’ (Press Release, White Cube, 2013) This notion of multiple meanings seems to be intrinsic to Martin’s work, and is both evident and successful in the small collages.

By adding oddities, such as a fish or a worm ridden apple, the viewer looks not only to the origin of these found documents but also the relationship between that which was there and that which is added; opening up history to intervention and reconsideration from the present. Delving further into what it means to make art work in the technological age, Martin addresses collage as his method of choice: ‘Everyone knows that with Photoshop you can create a perfect illusion but maybe the illusion is not perfect when it’s perfect.’ (White Cube, 2013) One cannot help but agree.

The ground floor plays host to a piece which, yet again, stretches and extends the traditional to the modern day; this time through methodology used when manipulating materials. Lost Wax, 2012-2013, sees empty honey combs transformed into bronze, through the ancient technique of lost wax casting. The relationship between the process and the organic form draws attention to the fragility of nature, with the transformation to bronze halting the inevitable decay. Much like Untitled, looming on the edge of destruction and preservation, Lost Wax sees Martin lending ‘permanence to a transient form…as it turns nature into artifice.’ (Press Release, White Cube, 2013)

Lost Wax seems to act as a fossilisation of a moment, highlighting the intangibility of nature’s delicate balance, and a reminder of bees’ steady demise. The quietness of the once active, empty shells is heightened by the vastness of the room against these small wall mounted pieces. Instead of being engulfed by the negative space within the gallery, the curation has the opposite effect. Each piece begs to be looked at closer, the softness of the white pigment brushing against the bronze symbolising both a declaration and a surrendering to the transience of our time on Earth. The fact that the process of lost wax casting cannot be used with honeycombs, and Lost Wax is in fact a failure in terms of the technique, only adds to the sensitivity we feel for the piece. Martin describes the outcome as showing that ‘we cannot imitate what nature has made. We are incapable. That incapability has a certain beauty.’ (White Cube, 2013)

Perhaps a beautiful incapability is what we take away from the exhibition. While the show explores concerns as momentous as ‘life and death and everything in between’ (Press Release, White Cube, 2013), the work does not aim to dictate or instruct; it is resound to the fact that there are no answers. Instead it becomes a celebration of a natural order we cannot comprehend, a playful dialogue with our own imagination.