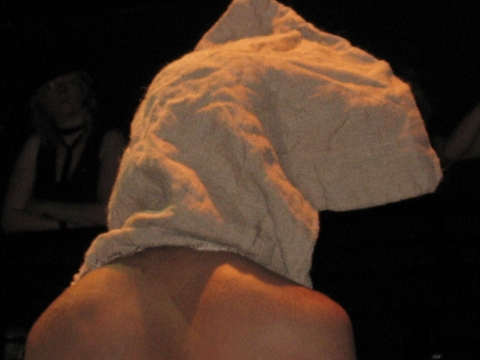 ‘Come dressed for the red carpet’, said the text in the publicity material. The red carpet was laid out at the door of the Arnolfini in Bristol on a Saturday night and the show was a sell-out. There were different interpretations of ‘dressed for the red carpet’, however. Some came in what could be seen as full ironic Rocky Horror Show dress, bright coloured wigs, petticoats and overblown makeup, while there seemed to be strong contingent in posh frock mode.

The catwalk show began ‘Winston Churchill’s ‘we will fight them on the beaches’ speech voiced over the video image of a gorilla typing. Opposite this a large wooden crucifix anchored the show with various performers standing tableau fashion in front of it while others performed on the catwalk.

Think: four armed gas-masked male, naked female, female suicide bomber with Nike logo on her back, naked ‘neantherdal’ woman, covered completely in body hair, woman wiping her armpits with the Union Jack – all to blasts of loud music – and all thoroughly irreverent and alternative.

Gomez Pena spoke at intervals; ‘We homeless, faceless ones at work so you don’t have to work so much; we reject your arms sales and oilfields, we distrust your white privilege.’ While at his side a female presenter, speaking silkily in Shopping Channel tones, asked various people from the audience to come forward and take part, or offered models for sale (our telephone lines are open all credit cards accepted).

On the video screen images from Government style information films played; migration pressure, join the army, and films of soldiers in Iraq, with statistics on deaths, combined with images of the ‘rebels’ from previous shows.

This was spectacle, a series of images jostling for attention. Did it succeed in being what Gomez Pena has described as ‘politically and socially pertinent art’* or was it seen by the majority of the audience there, as one voice described it on the way out, as ‘completely bizarre’?

In a telling and moving section near the end a number of the artists walked onto the catwalk naked and had their heads covered in hoods. They were auctioned by the Shopping Channel voice against a background of George Bush’s voice talking about the war on terror.

Bristol, slave city, sugar city, a city where people dress up to attend ‘auctions’ of performance artists; this was the closing event for the Arnolfini’s Port City – a large scale international project addressing issues of migration, trade and contemporary slavery.