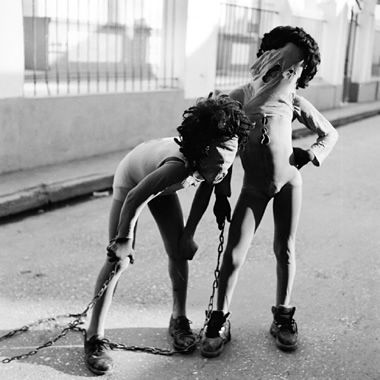 ‘The photographic representation, Haiti’s external perception, is the crucible of racial anxiety’, Leah Gordon tells me. Her black and white photographs of the pre-Lenten Mardi Gras Kanaval in Jacmel, Haiti intervene in this cultural milieu, but act less as ethnographic documents and more as performed ethnography, as Myron M Beasley, Professor of African-American Studies at Bates College has categorised them. Existing between portraiture and reportage, the photographs tap into the cultural memory and history that the characters captured re-enact, through the uncanny, the grotesque, the hyperbole celebrated and exorcised through this folk ritual. ‘I was very impressed by the fact that the production of culture is still in the hands of the subaltern class in Haiti, which makes a co-existence with the production of history’. Through the confident gaze of the camera- a 50 year old Roleiicord twin lens reflex- this history becomes an Artaudian spectacle, one in which identity is displaced, tapping into an otherness that is dominant and reflexive.

Haiti- the first and only black nation that gained its independence through a successful slave revolt- is a place whose recent history has a distinctly different relationship to colonial trauma- and the exhibition at New Art Exchange taps into its topology by engaging in this performance of memory. ‘Perhaps because they overcame it through a slave revolt, the figure of the slave is more powerful, less reluctant’, Gordon tells me. This power is visible in her photographs, in which characters are not only represented through costumes, masks and props, but embodied in an energy which Gordon’s photographs capture in stasis. Transvestites, ghosts, horned devils, buck teethed soldiers and mythical creatures walk the streets of Jacmel in a spectacle of the folk unconscious, tapping into historical characters without direct re-enactment, instead, a personal and collective liminality that emerges.  Stripped of color, Gordon’s photographs tap into process as much as they do into representation, making visible the details that frame the creature taking shape in the photographs, rather than the person behind it.

Gordon’s photographs don’t intervene in this collective wandering; they are always portraits taken on side-streets, in conversation with the subject, devoid of voyeurism and confident in their dialogism. They are confrontational, haunted by the otherness of the character they portray, and, despite the energy they capture, they are still, in the midst of the recalling of the fictional, the historical, the collective. In this way, Gordon’s photographs occupy a third space- not the site of their capturing, nor the photographic presence, but one in which the performance of a liminal identity occurs. As they are staged for the photographer, we become the audience that completes that performance, engaging in this ritual of grotesque excess not devoid of humour.

The photographs, portraying mostly men and children rather than women, who gain equality only in the Voudou practices that seeks a different social stratification, form a collective that engages with the inscription of an external, performed cultural memory and history. In its form, the Kanaval becomes sacred and secular, the forces enacting, despite their confident satire, providing a particular power to the collective, creating a heightened performativity within the public domain which the people inhabit in their day to day life, rather than separating from it, existing, as Kaja Silverman writes, ‘on the threshold of the visible world’.

The oral histories presented alongside the photographs in the exhibition add more to the dramatic and cultural significance of the photographs, already dominating in their theatricality. Here the aesthetic is conflated with the aural, underlining the dialogue between the folk collective and its historical and cultural practices, bringing ownership to a rich history and allowing the mythical to collide with the historical. This not only provides a voice to the photographs, but also a collectivity and a transgression which displaces the position of the viewer, thus engaging in a form of participation.

In its aesthetics and artistry, the Kanaval in the Western context holds intriguing theatrical metonymies- from Alfred Jarry’s grotesque Ubu Roi, present outside the theatrical into the public, as well as more historically aligned outside of the appropriation of the great 20th century makers, from Jerzy Grotowski and Antonin Artaud through to Bakhtin, Turner and Durkheim. The merging of the fictional with the religious in the public realm isn’t simply transgressive, it’s almost aggressive in its hyperbolic grotesqueness, recalling a present and tangible Other- such as Chief Charles Oscar, the military commandant in charge of police who murdered five hundred prisoners during the troubles in Port Au Prince only to be torn apart by villagers in the street for his crime, causing a river of blood, with his bucked teeth and tilted hat. These characters are enactments as much as they are folk interpretations, and the energy they gather, the flirting with the mythical and religious means there’s a constant, live process of reinterpretation. This making of cultural memory is visible in Gordon’s photographs, and the consistency of her method and her discursive approach makes the photographs a subtle public intervention that translates on either sides of the image.

In Kanaval, Gordon’s work is paired with Andre Eugene’s British Folk Badji, an altar made up of sculptural collages and objects, transforming ‘the detritus of a failing economy into radical and warped sculptures’. As law and culture are tied so closely in Haitian heritage, Eugene’s work, via the artist collective Atis Rezistans, makes an intriguing case for the power of objects to critique, recall and occupy cultural memory, drawing a link with a mildly visible yet present British folk, capitalising on the power of the vernacular as site of transformation.

Gordon’s photographs are a lateral engagement with the empowering nature of folk culture and its public presence, but in their specificity, gaze and focus, they tap into the historic and the living, reconsidering ways to engage in such ritualistic spectacle, capitalising on the theatrical as a way to access public memory. ‘The spirits here become a cosmology, a system through which to understand, a mode of codification’, Gordon tells me. In the almost gothic aesthetic of her images and of the spirits themselves, there is no trauma visible, rather the opposite- a confident collectivity in which slavery has become a site of pride, and the uncanny a tool for empowerment. ﻿