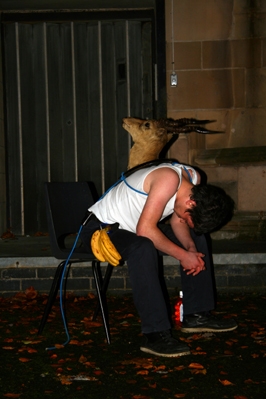 All human behaviour is scheduled and programmed through rationality. There is a logic of institutions and in behaviour and in political relations. In even the most violent ones there is a rationality. What is most dangerous in violence is its rationality. Of course violence itself is terrible. But the deepest root of violence and its permanence come out of the form of the rationality we use. The idea had been that if we live in the world of reason, we can get rid of violence. This is quite wrong. Between violence and rationality there is no incompatibility.

White vest is tight around torso. Right hand is high above lowered head. Left hand dangles. Disinfectant runs down scarred scalp and drips over shoulders and onto black tarmac. Hands are steady. Flow is constant. Near silence and self absorption. Tension as horns protrude.

0770. Matter with uniform qualities. Lighting of burner. Pyrographic process. Inscribing the knife with blue heat while listening to Chesney Hawkes. Yellow plastic bubbles hiss and drip as they fall from knife. Metal is discoloured. Silver to brown to black. I am the one and only.

0776. Basis in reality or fact. Opening a black plastic bag and taking out a can of cider. Opening the cider and pouring into bag. Orange/yellow liquid seeps out through holes. Repeat until empty.

0782. Material used as a pattern. Pulling on gas mask. Glass eye rotunda view. Tubular head bowed while extinguishing flame. A black blood stain around the back of head. Material and historic indent of violence on green rubber.

0788. Indicating cause or action to an extent. Sitting with a Co2 canister between knees. Revealing black umbrella. Extending umbrella and holding aloft above head. Release of Co2 with firm kick discharging mushroom cloud. Whiteout.

Devlin’s filmic and personal depictions of impending violence are provocative and unnerving. Self hurt, humiliation and violation figure in his actions that mark oedipal transgressions alongside notions of sadomasochism. Causalities are mobilized that blur his body as object and subject. The sadist therefore becomes at the same time a masochist in a schizophrenic collapse of binary constructs. His stylized, psychic and physical rationalization of violent epistemologies involve and foreground an accordant estrangement of the self. A series of enacted, symbolic castrations configure a systematic purging that falls short of redemption. There are continual and repetitive transferals of cruelty from object to body, body to object. A resolution of conflict maybe sensed in the work of Devlin, however, this resolution is burned and tinged with a violence that threatens to explode into cataclysm with a forceful and implosive jolt.