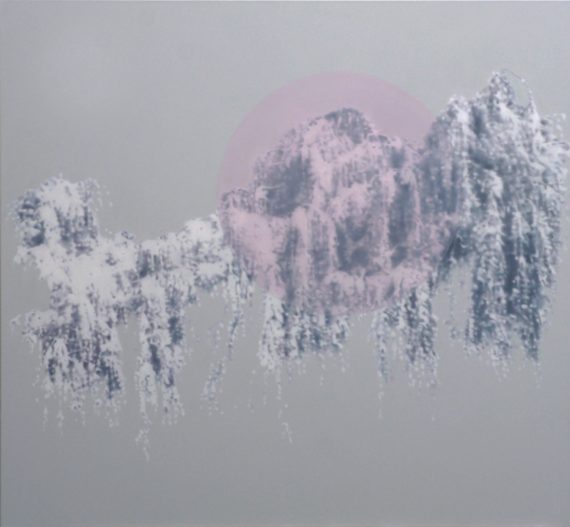 Memories, for those of us whose childhoods coincide with the proliferation of colour photography, are often of a distinct rose-tinted hue that has more to do with chemistry than a peculiar generational propensity to nostalgia. Magenta dye, in the emulsion of colour photographic paper, takes the longest to fade and continues to colour the documents of our lives long after cyan and yellow have been consumed by light and time.

Shades of this faded flush recur, sole chromas amidst misty-water greyscales, in Helen Kincaid’s recent body of work drawing on a single photograph of the artist’s mother. The title … delayed rays of a star … is quoted from Roland Barthes’ investigation into The Photograph, Camera Lucida (1980): “the photograph of the missing being, as Sontag says, will touch me like the delayed rays of a star”.

While Barthes’ Camera Lucida and Kincaid’s … delayed rays of a star … pivot on photographs of their recently lost mothers, neither share the referenced photograph – for what should those singular images possibly mean to us? Our disinterested gaze could only defile the precious and insult the beloved. Kincaid, instead, subjects the image to a process as rigorous in its execution as it is tender in its motivation: Sifting, scanning, scrutinizing, dissecting, magnifying, repeating and reproducing. It is a risky process, this meticulous interrogation. For just as a familiar word, reiterated over and over, may be prised from its meaning and reduced to nonsense, so an image may be prised from its referent and ground to dust beneath the weight of such intense scrutiny. In this way the process, and its consequent paintings and film, imitate the elusive nature of memory itself: dissolving into abstraction at the precise moment its longed-for entirety is glimpsed and almost grasped. Whereby one begins again, reconfiguring and reconstructing, permutationally piecing together fragments in the hope of completing the picture, of identifying an essence, of reconstructing a meaningful whole despite numerous missing pieces.

I vaguely remember a jigsaw puzzle I had as a child. I don’t recall the picture it made or how many pieces it had. I do remember, however, a single piece was missing and someone, perhaps my father, had made a substitute piece from mismatched cardboard with the absent fragment drawn in with felt-tip pen. It is curious that without this absence – this missing piece – I would probably not remember the jigsaw puzzle, or my father’s attempt at reparation, at all.  A physicist once tried to explain to me how the world contains more nothingness than matter and, although I didn’t precisely follow the science, it made sense to me that without nothing a defined something becomes impossible. The power of nothing – the essential nature of the negative – seems central to Kincaid’s work. Gaps and blanks are as evocative as an almost recognizable flower or foot of a garden lounger. A number of mauvely grey blank canvases punctuate the grid of fragments. Discs of translucent or opaque paint both obscure detail and open upon spaces of potentiality – unarticulated holes. Our human desire for completion – for wholeness – will fill the holes and animate the blanks with our own memories and construction. Where the original pieces are missing – we will make them – from cardboard and felt-tip, from canvas and paint, from salvages, souvenirs and snatches of memory.

The photograph is evidence of a single moment in time, a fraction of a second arbitrarily selected and preserved from an infinity of other, undocumented, moments. Photography is quick; painting is slow. To make multiple paintings from a single photograph is to stretch its existence in time – both backwards and forwards. The painstaking remaking of fragments of a split second, plucked from life by the means of relatively modern technology, with the ancient technology of paint, connects its elements to the prehistory of humanity – to the painted caves of Lascaux for instance. At the same time it retrieves a distant moment and makes it contemporary, as its qualities are pored over, made and remade – to be imagined and reimagined, constructed and reconstructed – by both artist and viewer right now and in future.

Photography is a renaissance medium. It embodies a reconciliation of the sciences and humanities following centuries of a western rationalism which sought to banish magic and mystery from life. We may be familiar with the scientific facts of the photograph but the cold hard facts do nothing to dispel or dilute its potential for magic. It remains difficult not to feel, if not rationally believe, that a photograph of a loved one does not contain something, however fragmentary and incomplete, of their essential being – of their star.