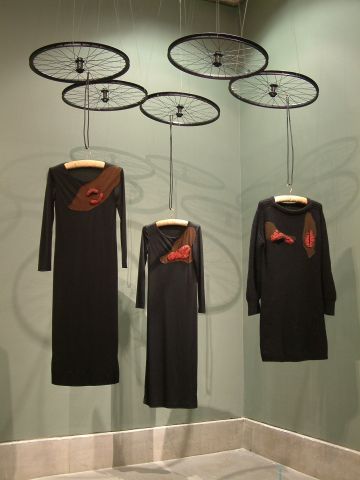 Within the Vide (a gallery space between the lift shaft and staircase) is the bronze cast sculpture of Indian artist Ranjani Shettar. This a-symmetrically placed installation piece begins at floor level and reaches upwards touching and arching high against the concrete walls. We are told that Shettar uses the ancient lost wax process to produce this work but it obviously references organic forms such as leaves or vegetation. The verdigris colouring and uneven quality of the cast surface heighten the personal and fragile nature of these individual segments which describe a looping formation, an “Aureole”, against the backdrop of the walls. Each separate form is anchored protruding at right angles and, with the inclusion of subtle lighting, produces gentle shadows. The contrast between these delicate filigree structures meeting cold modern architecture is where the sparks are supposed to fly. Unfortunately Shettar’s elegant leafy shapes appear insubstantial against the hard grey imposing nature of brickwork. It is beautifully decorative and ornamental but no more than that. It is certain to be overlooked by the casual non-discerning viewer.

92 year old, self taught Italian artist Carol Rama is represented by a collection of twelve works which span a sixty year period. The room-like gallery space contains a mix of watercolour, sculpture, collage and photography. As you enter the gallery you are confronted by a blown up black and white photograph of Rama sitting in her home/studio surrounded by a jumble of artworks and art paraphernalia. Having witnessed this scene the gallery setting feels slightly cooler and empty, especially since the walls have been painted a forest green colour and the floor is cold grey concrete. The most intriguing aspect of Rama appears to be the artist herself. The historic flavours are there; time and endurance have brought together an archival collection. A twisted bicycle inner-tube cast in bronze conveys suggestive overtones, managing to appear both flaccid and rigid at the same time. A work such as this bears an art history familiarity and places Rama firmly in a past era that maybe has failed to bestow a more deserved recognition upon her. Other works also play on the sense of the surreal; black woollen “wedding dresses” which display human organ motifs, a misshapen bronze sculpture of a shoe with a mysterious inner appendage, and an ink/collage with dolls’ eyes. If the intention is to convey Rama’s extraordinary career journey through European Modernism then surely a more considered, breathable presentation is needed. With more attention paid to the detail of this installation “The Cabinet of Carol Rama” could have been an inviting curiosity shop for the viewer to explore. There are hints of the personal and ornate evident in the beautiful framing of the works on paper and the implied past functional use of the dresses as clothing. However, sympathetic lighting, a carpeted floor and use of occasional furniture would have helped to convey a homely atmosphere and could have lifted this display from a half hearted museum piece into the realms of domestic artistic bliss.

Locked within a metal mesh cage, constructed from the type of sheeting used to board up empty property in Liverpool, is housed a mishmash of an exhibit. It is the artist as tourist, observing, collating and naively misunderstanding. It includes a cheap reconstruction of Liverpool Football Club changing room, ageing T.V. monitors showing a You Tube hit: a baby panda bear sneezing with the mother panda jumping with fright, fake Liverpool FC shirts hanging from the walls and a projection screen showing random film clips ranging from the Liverpool 8 rapper RiUvEn to Bozhkov himself in conversation with former 1980s Militant Tendency Liverpool Councillor Tony Mulhearn. A musical sequence which contains Bozhkov singing “Imagine” inside a derelict Anfield house is especially cringe-worthy. The work borders on the patronising and reflects a superficial shallow view. Unfortunately this is something which is not uncommon from many International artists directly responding to the city of Liverpool in making new work for the Biennial. As a Bulgarian artist Daniel Bozhkov’s attempt to engage with Liverpool treads a fine line between comprehension and condescension by dishing up the usual clichés and stereotypes of football, music, the riots and urban regeneration.

The windowed gallery space is occupied by a solitary white faced mannequin figure wearing a costume made of deconstructed tyre inner tubes, zips and ribbons. The figure stoops and leans towards the window peering at passers-by in the street outside. A trail of ribbons and balls made from stitched rubber makes a pathway on the floor leading the eye away from the harlequin style figure and taking the viewer on a journey out of the room and up the staircase to the upper level gallery. Immediately on entering you encounter a room thick with colourful ribbons hanging from a false ceiling. It is difficult to penetrate the space and you are quickly overwhelmed with feelings of frustration and claustrophobia as you try to negotiate your way through, guided by random pathways that begin to open up amidst the forest of brightly coloured streamers. This interactive, crowd pleaser of an artwork provokes gentle laughter but ultimately feels like an empty experience. It is reminiscent of a journey through a garden maze or a fairground hall of mirrors but your quest through this labyrinth reaps no reward, save the discovery of a pair of mannequins dressed in similar attire to their companion on the ground floor. We are informed, by way of a supporting statement, that Hlobo “engages in an investigation of sexual identity and personal politics, contemplating his position as a gay man within Xhosa culture”. Any connotations to gender or sexuality are so out of sight they are lost within this superficial family friendly interactive artwork.
The curation for this group show feels clunky, mismatched and ill conceived. It is an uninspiring exhibition, especially when you consider the international stage which the Biennial occupies. In the case of this Biennial show it would seem that the whole is actually less than the sum of its parts. Something old, something new, something borrowed and something…..